Liverpool were never at their free-flowing best against Wolves on Sunday, but a Sadio Mane-inspired showing earned the Reds a 2-0 win.

The Premier League title agonisingly evaded Jurgen Klopp‘s side, as Man City clinched back-to-back triumphs after a 4-1 win at Brighton.

Liverpool still managed to do their job at home to Wolves, however, finishing on 97 points—the most in a season in the club’s great history.

It was Mane who found the net in both halves, producing two clinical finishes, sharing the Golden Boot award with Mohamed Salah and Pierre-Emerick Aubameyang in the process.

While there will be obvious disappointment at missing out on title glory, Klopp and his players must feel proud of their efforts, and they have a Champions League final against Tottenham to look forward to on June 1.

Here we compare our player ratings from the game with those from the Liverpool Echo, the Express, the Independent, Sky Sports, The Anfield Wrap, FotMob and the TIA readers. 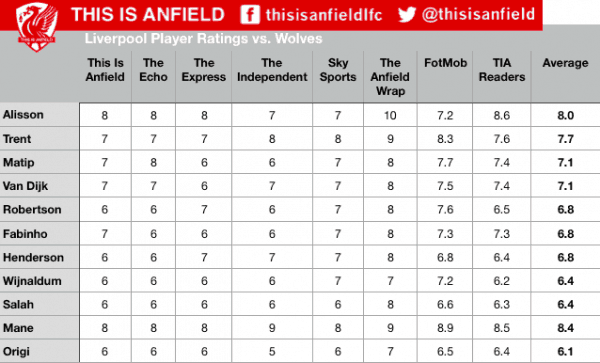 It was no surprise to see Mane (8.4) come out on top in the averages, following another star showing from the Senegalese.

Liverpool’s No. 10 has been his side’s outstanding attacking player this season and it was fitting that he finished the Premier League campaign with a bang.

This is Anfield’s Henry Jackson described Mane as “one of the best players in Europe at the moment” after the game, as he drew level with Salah and Aubameyang.

Ben Pringle of the Express felt his movement “gave Liverpool a spark that was needed,” on a day when the all-round performance of the team was a little jaded after their excursions against Barcelona.

Alisson (8.0) capped off a superb first league season with the Reds with another influential performance, taking home the Golden Glove award over compatriot Ederson.

The Anfield Wrap’s Ben Johnson even hailed the 26-year-old as “the best keeper I’ve ever seen in the flesh,” with very few better in the world currently.

Trent Alexander-Arnold (7.7) capped off an excellent season with another assist, meaning he has the most by a defender in Premier League history (12).

In truth, nobody came close to play poorly at Anfield, although Divock Origi (6.1) earned the lowest average after a quiet day leading the line.

Jackson felt he “lacked the guile” of the absent Roberto Firmino and the Echo‘s Ian Doyle thought he “was caught offside too often and faded.”

It is now a three-week break for Liverpool before the Champions League final against Tottenham—a game that could define this Reds side.

They will head off to Spain for a training camp after a five-day rest this week, as Klopp and his players prepare for one of the biggest games of their careers.