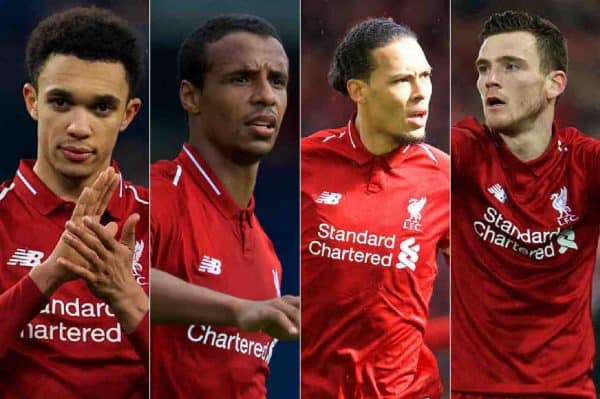 Liverpool’s Premier League campaign is done and dusted for another year, but which players have we recognised in our end of season awards?

Liverpool seem to have ditched their usual end of season ceremony, so to make up for it, here are our slightly more varied end of season gongs.

Alisson and Sadio Mane have excelled, Mohamed Salah and Gini Wijnaldum have been underrated and numerous others have shone, but Virgil van Dijk is Liverpool’s undisputed star man in 2018/19.

The season that the towering Dutchman has produced has been one of the greatest by a Reds defender, and there is no better centre-back on the planet currently.

Without him, Liverpool would never have got 97 points and reached another Champions League final.

The Brazilian has been superb on his debut season, showing exactly why he was (briefly) the world’s most expensive goalkeeper when he joined from Roma last summer.

The Reds haven’t had a better ‘keeper in the Premier League era, and if he continues this form, he may even eclipse Ray Clemence, Bruce Grobbelaar and the rest one day.

Fabinho also deserves a special mention, having recovered from a slow start to prove why is one of Europe’s best midfield destroyers.

Imagine being 20 years of age and one of the best attacking full-backs in Europe already – that’s where Trent Alexander-Arnold finds himself.

The youngster continues to excel at his boyhood club and his tally of 12 assists is the most by a defender in Premier League history.

The sky is the limit for Trent.

Wijnaldum can frustrate when he fancies one of ‘those’ Wijnaldum days at the office, but there is a reason why Klopp loves him so much.

One of the most selfless players in the league, the 28-year-old has tactical intelligence by the bucket-load and so often makes Liverpool tick in his own under-the-radar way.

He is the 21st-century version of Ronnie Whelan.

Unlike the Most Improved award that you get when you’re a kid, which frankly just feels insulting, Joel Matip deserves real praise.

The centre-back has not always convinced in a Reds shirt, but his form at the end back end of the season has been fantastic and he has found a level not many thought he had?

First choice moving forward? A good man to have around? Absolutely.

In a Liverpool squad littered with humble, likeable characters, Andy Robertson simply ‘gets’ what it means to play for the Reds and his work both on and off the pitch make him a wonderful ambassador for the club.

The Scot also got under the skin of both Lionel Messi (slapped him round the head) and Luis Suarez (called him a “fat ****”), which was impressive.

While some footballers who aren’t featuring for their team can sulk and perhaps hamper team morale, Simon Mignolet has been the complete opposite.

Lauded for his positivity around the training ground, the Belgian has been a big influence and is somebody his teammates clearly respect.

He might not be the best goalkeeper around, but he is a class act.

Last summer Divock Origi looked certain to leave Anfield after falling out of favour and lacking any kind of form even in pre-season.

From nowhere, though, he has enjoyed the most unlikely of Reds resurrections, becoming Liverpool’s man for the big occasion.

The memorable Everton goal, the late winner at Newcastle and the unforgettable double against Barcelona – nobody expected this.

A new deal may be on its way.

Daniel Sturridge isn’t the player he once was, but he has gone the entire season without a notable injury, which is such a positive.

It has been pleasing to see the striker be a part of so many matchday squads, and with his exit looming, perhaps there could be one final Vladimir Smicer-style send-off in Madrid? That’d be nice.

We shouldn’t be touching on too many negatives after such a great season, but nobody’s campaign has panned out more predictably than Adam Lallana‘s.

Now surely the most injury-prone player at the club, the 31-year-old has made only six starts all season and has been continually sidelined with ‘niggles’ that seem to last for months.

One impressive performance at home to Burnley aside, Lallana has continued to flatter to deceive when he has played, which will surely lead to a summer exit.

You could count on one hand the number of below par games Robertson has had in two seasons for Liverpool, unless you’re being needlessly harsh.

The left-back is not only the Reds’ most reliable performer but also one of the most consistent figures in the whole of the Premier League.

It is a genuine surprise if he produces less than a seven-out-of-10 showing.

Without Alisson‘s last-gasp save on Matchday Six of the Champions League group stage, Liverpool’s season would be over.

We would be sat here painfully thinking about missing out on the Premier League title, with a long summer ahead of us.

Instead, Liverpool’s world-class goalkeeper brilliantly thwarted Arkadiusz Milik in stoppage time at Anfield, and five months later the Reds are on their way to Madrid.

He may come across as dour, but anyone who follows James Milner on social media knows he is the funniest player in the squad.

The veteran has a sense of humour so dry it makes Cardiff’s pitch look wet, and the ‘boring James Milner‘ tag that used to follow him around is now a thing of the past.

The ‘old man’ of the squad has proven his value both on and off the pitch again this season.

He would be great company on a night out, albeit drinking Ribena and measuring Easter eggs!