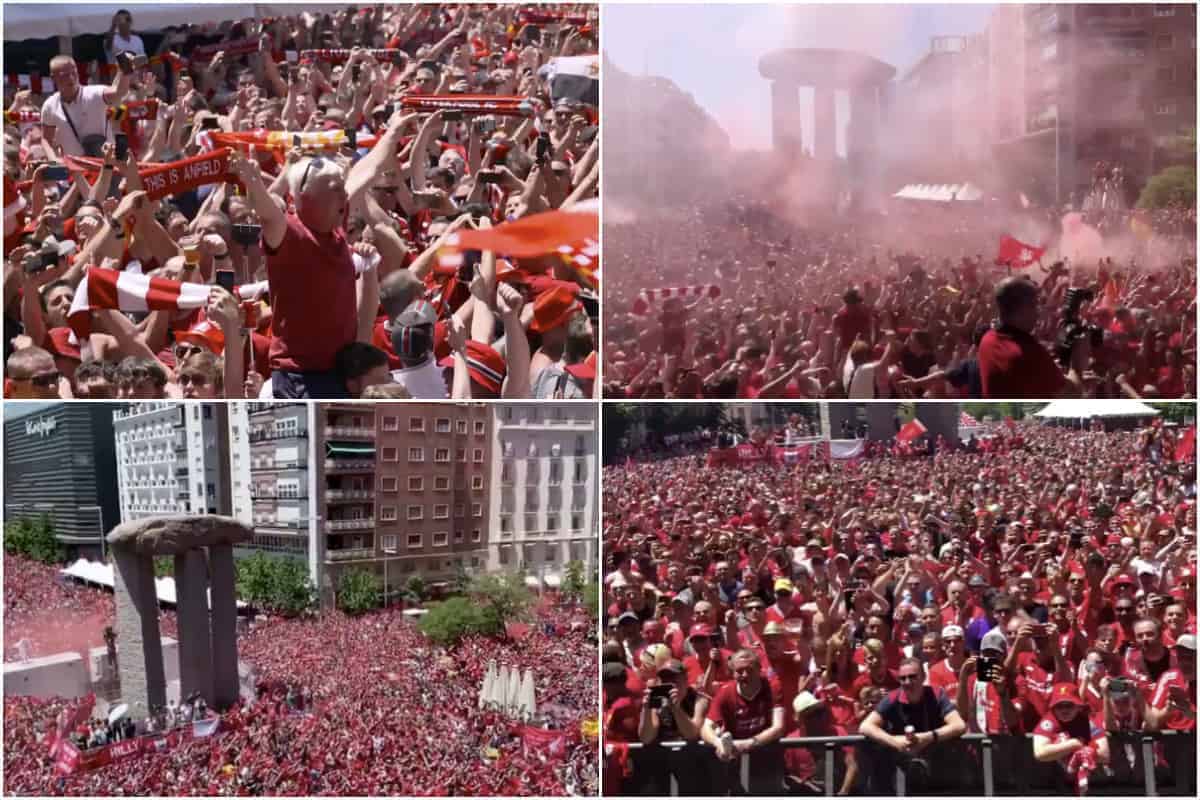 Thousands of Liverpool supporters took to the club’s fan zone on Saturday afternoon in Madrid, ahead of the Champions League final against Tottenham.

The Reds take on Spurs at the Wanda Metropolitano tonight, looking to bring home their sixth European Cup after a 14-year wait and two heartbreaking final defeats.

Though both clubs were only afforded 16,600 tickets for Atletico Madrid’s 68,000-seater stadium, an estimated 100,000 arrived from England to back the Premier League duo.

It seems as though the majority of those came from Merseyside, as Liverpool supporters made ridiculous journeys in planes, trains and automobiles, staying in hostels, hotels and on sofas, to make it to Madrid.

With the atmosphere in the city building in the hours ahead of kickoff, the club’s official fan zone in Plaza Felipe II was packed out early on Saturday.

Reds fan and radio DJ Colin Murray was among those to perform, and the Northern Irishman clearly enjoyed his hour-long set—joined by John Barnes for a rendition of Rapper’s Delight:

Sitting down for Mo Salah at the Fan Park in Madrid ?? #YNWA pic.twitter.com/ImO59D38vk

If you only watch one video from Madrid today watch this… John Barnes is like no one else on earth ??@LFC #YNWA pic.twitter.com/ExjaSdDCJb

Thank you to every Liverpool fan in Madrid… you gave me an hour of my life I’ll remember on the day I die.

Cast frontman John Power also took to the stage, and treated the crowd with The Fields of Anfield Road:

One of the main attractions came with BOSS Night’s Jamie Webster, whose raucous version of Virgil van Dijk‘s chant was met with a brilliant reception:

There was even a nod to last year’s final from Chelcee Grimes, as she performed Dua Lipa’s One Kiss, which became a favourite among fans following her performance in Kyiv:

La atracción principal, however, came with the entire fan zone singing You’ll Never Walk Alone, with both the club and local Miguel Otero sharing the scenes:

Incredible stuff. Come on you Reds!