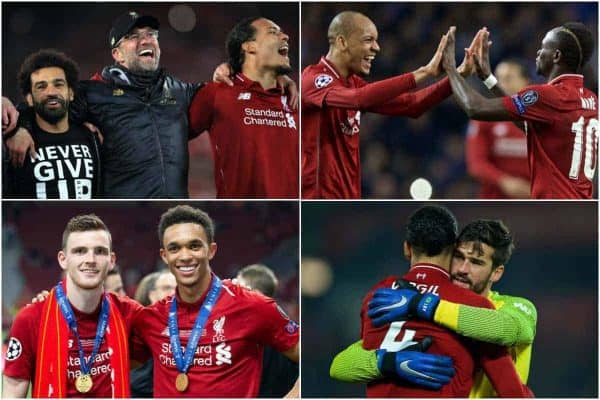 We take look back over the biggest moments from Liverpool’s incredible 2018/19 campaign in photographs, from pre-season to lifting the European Cup in Madrid.

It ended in the very best way, with a trophy that defines the most successful club in England.

Amassing a record points total in the Premier League ultimately left nothing but a second-placed finish—however, in Europe, the Reds prevailed once again.

As the 2018/19 season approached, the disappointment of Kyiv was slowly drifting out of the spotlight.

Liverpool had strengthened, most notably in goal as the arrival of Alisson was to shape the Reds’ path over the forthcoming campaign.

It was Xherdan Shaqiri, though, who provided the eye-opening moment of the summer.

His wonderful—and quite frankly, ridiculous—acrobatic strike against Man United in Michigan drew all the plaudits it deserved.

Liverpool left America and moved on to Dublin.

Backed by thousands of Irish supporters, the Aviva Stadium welcomed Alisson and it marked the arrival of a trademark gesture by the goalkeeper, his hands-to-the-sky routine.

When it was eventually time for the Premier League to start, the Reds did so in the most emphatic way.

Anfield enjoyed a 4-0 thrashing of West Ham, which saw Liverpool register their 500th win in the competition.

Mohamed Salah picked up where he left off, and Sadio Mane‘s brace was the shape of things to come as the Senegalese forward started his quest for the Golden Boot.

It was the start of a special season for our No. 10.

Brighton arrived at Anfield in late August and it provided the glimpse that everyone had waited to see—just how good was Alisson?

The Brazilian provided the answer quickly, producing a world-class save to allow Liverpool to edge past the Seagulls by a slender margin.

By the time the Champions League returned to Anfield, Liverpool had made it five wins from five Premier League games.

An away trip to Wembley proved victorious against Tottenham, who would eventually go on to stand between the Reds and a sixth European Cup.

The then five-time winners had been drawn in a highly competitive group, and the circus that is Paris Saint-Germain rolled into town.

Neymar had spoken pre-match about how he didn’t rate Liverpool’s chances of finishing in the Premier League‘s top four.

He was made to eat his words as the French side left Anfield with their tail between their legs.

Roberto Firmino grabbed a late winner, but not before Daniel Sturridge had headed Liverpool into the lead on his first start in the competition for the Reds.

Jurgen Klopp‘s men were unstoppable on English soil as the Reds kept on winning—but in the Champions League, they had tasted defeat once again on the road.

A dismal showing in Naples left a much needed-big response against Red Star.

Liverpool duly obliged as Fabinho announced himself to the Kop. A stellar performance would go on to be a constant, while Firmino scored his first goal in over a month.

Remembrance Day was the backdrop to a fixture that saw Liverpool return to the top of the Premier League with a second-gear victory over Fulham.

It wasn’t the best performance of the season but it saw Shaqiri score, then slide with his tongue out in celebration. It was to become a regular sight over the next month or so.

Liverpool were going from strength to strength, continuing their best start to a Premier League campaign with victory against Watford.

On an evening where the travelling Kop protested about obscene payments to league chief Richard Scudamore, local hero Trent Alexander-Arnold shone as bright as the Vicarage Road floodlights—netting with a sublime free-kick.

As Christmas approached, Liverpool fans were given the sweetest of presents once again by their heroes in Red: a close game against city rivals Everton was eventually settled by two massive moments.

Joe Gomez put his body on the line—literally—as his superb clearance allowed Divock Origi to go on and grab the latest of late wins.

The Kop went mad, as did the players and the boss. Klopp’s touchline dash would end with the German in hot water with the FA.

Trent and Andy Robertson duelled all season long as their challenge to be the No. 1 assisting full-back started to make a real impact.

The Scot was on hand to assist Salah during the trip to Bournemouth.

The defender looked delighted, even if he was soaked to the skin from a seaside downpour.

As 2018 drew to a close Liverpool faced several challenging games.

First up was the visit of Napoli in a must-win European game, should the beaten finalists harbour any desire to right the wrongs of Kyiv.

The fixture couldn’t have been more nervous; the Reds simply had to win.

With the narrowest of margins over their Italian visitors, Liverpool could see the final whistle—but not before Alisson had to be called into action.

With almost the last touch of the game, the Brazilian spread himself wide to deny a certain goal and Champions League elimination.

His transfer fee looked to be money well spent as he allowed Klopp’s side to make the knockout stages once again.

Victories over United, Wolves, Newcastle and Arsenal made December a month to remember as the year ended.

The Reds hit the net 14 times as they demolished their festive opponents.

Embarrassing their Manchester neighbours led to the exit of Jose Mourinho, while no presents were gifted to old boss Rafa Benitez or old Sevilla adversary Unai Emery.

The new Arsenal boss was on the end of a rout which showed just how much Klopp’s Liverpool had developed as a side since the two managers last met in the Europa League final of 2016.

The New Year didn’t get off to the best start, as defeats to Man City in the Premier League and Wolves in the FA Cup left fans with a hangover they didn’t see coming.

However, defeat at the Etihad was to be the only red mark in Liverpool’s league campaign as they kickstarted 2019 into delayed action against Brighton.

The Reds then just about overcame Crystal Palace in a dramatic fixture on what would have been Bob Paisley’s 100th birthday.

Klopp was ecstatic as the Reds held on to win 4-3.

Liverpool stumbled through their next block of games.

Disappointing draws against Leicester and West Ham were followed by victory against Bournemouth, before another two draws in four games allowed City to regain the foothold in the title fight.

Watford felt the brunt of Liverpool’s attacking fire as the Hornets were stung by five goals, one of which was a piece of brilliance from Mane.

His backheeled chip took the score to 2-0 on a night when everything the Reds did ended up hitting the back of the net.

Divock Origi was a surprise starter and the Belgian scored another important goal.

As winter approached spring he would go on to become an unlikely source of massive goals.

A 0-0 draw against Bayern Munich in the Champions League round-of-16 first leg at Anfield had set up a wonderful winner-takes-all match at the Allianz Area, as March witnessed a relentless pursuit towards Madrid in June.

Klopp’s men stunned the Munich crowd as Liverpool ran out 3-1 winners on the boss’ home soil.

It was the Reds’ first real test in Europe and they had passed it with flying colours.

Mane embarrassed Manuel Neuer before Virgil van Dijk made the Bayern defence look amateur. Mane then capped a tremendous evening by grabbing his second of the night.

Victory in Munich provided a springboard, as the Reds took an astonishing 24 points from 24 available in search of their first league title for 29 years.

A last-gasp winner against Spurs was quickly followed by a superb comeback on the south coast against a revitalised Southampton.

Liverpool were purring in both the Premier League and the Champions League. The question became which one could they win?

As the end of the season rapidly approached Liverpool clung to City like a bad smell, while vying for the title was interspersed with ‘relaxing’ European trips to Porto.

Liverpool were simply phenomenal, breaking club records left, right and centre as they charged towards a final-day showdown.

Salah smashed a rocket past Chelsea in between two wonderful performances against the Portuguese champions which included Keita’s first Champions League goal for over a year.

Dreams of Madrid were becoming to become a reality, as were the frequency of Van Dijk’s headed goals from corners.

Liverpool travelled to Barcelona in a period of games that would define their season.

The Reds were humbled by the Spanish side, beaten 3-0 on a night when the scoreline could easily have been 3-3.

It took the wind out of their sails, for a few days at least.

Divock Origi came up with another massive goal as the Reds just about passed a late test at St James’ Park—but it would be the Champions League semi-final second leg that would see the attacker lay claim for a statue in his honour.

In a night that will now live forever, Liverpool outplayed, outmuscled and outscored Barcelona by four goals to nil.

Origi hit the first and fourth as he went from Merseyside derby hero to European legend, while Gini Wijnaldum grabbed two goals in as many minutes to send Liverpool to a second Champions League final in 12 months.

There was nothing more the Reds could have done in the Premier League.

One defeat all season had yielded 97 points, but it wasn’t enough to pip City to the title; Pep Guardiola’s side took the trophy by one point.

Liverpool had one last chance to end what was a wonderful season on the biggest of highs. Beat Tottenham in Madrid and they would be crowned champions of Europe for the sixth time.

The game was forgettable, but the result wasn’t—two goals were enough to see Liverpool claim victory over their London opponents.

For Salah there was redemption, for Origi there was one final chapter to a wonderful personal season and for you and me there were nothing but tears as this Liverpool side ensured their place in the history books, as legends of this great club.

Klopp had shaken off the unwanted tag of losing major finals with Liverpool in the biggest of ways.

Supporters thanked them by amassing in a number that touched 750,000 on their return to Merseyside with the trophy.

A perfect end to what was a wonderful season. The best bit is we can do it all again in eight weeks’ time.