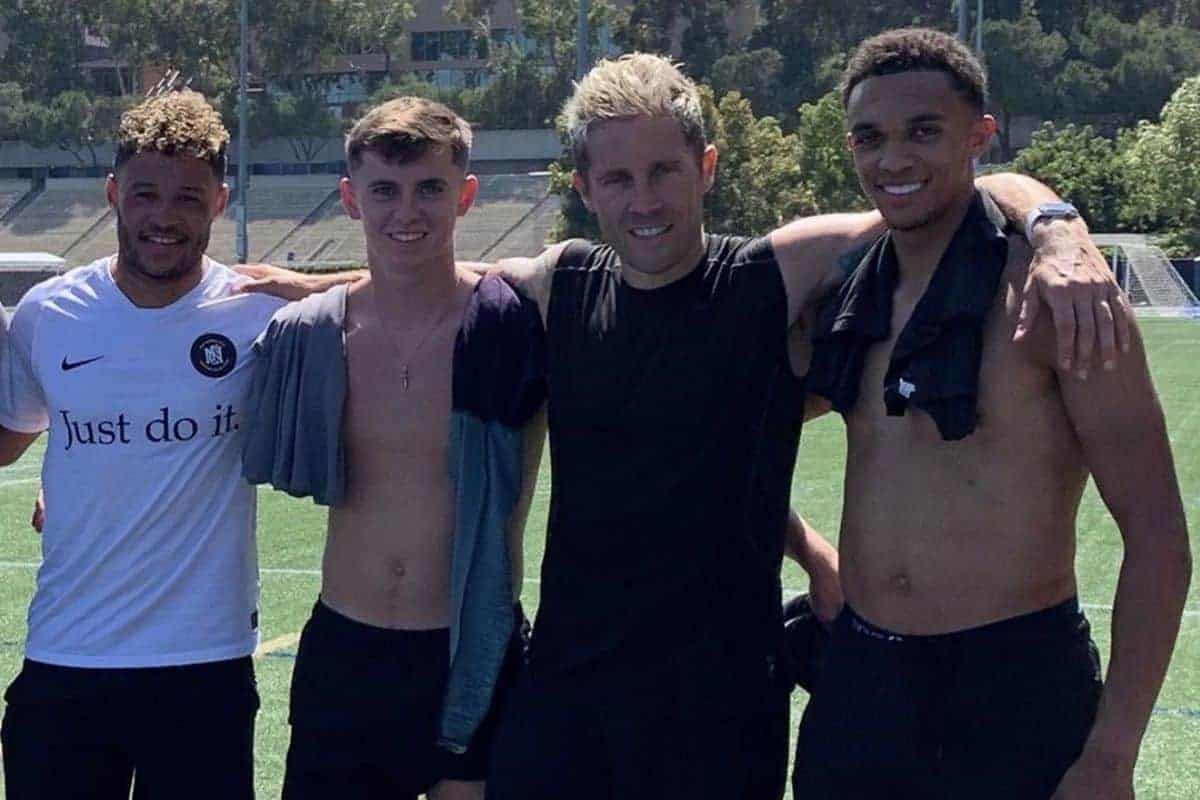 Alex Oxlade-Chamberlain, Ben Woodburn and Trent Alexander-Arnold have all trained together in LA this off-season, with a coach familiar with Divock Origi.

The Reds are set to report back to Melwood for pre-season training on July 6, with the majority of Jurgen Klopp‘s squad currently enjoying time off.

But the demands of modern football mean this is no longer ‘downtime’ for players, who are required to maintain their fitness over the summer, and follow individual training programmes.

For Oxlade-Chamberlain, Woodburn and Alexander-Arnold, this came during their holidays in Los Angeles, with the trio pictured with performance and fitness trainer Nicky Holender on Sunday.

“A great 5-a-side at the end of a busy day of training!” Holender wrote on Instagram.

“Thanks for going easy on me [Trent] and [Ben] and thanks for feeding me the ball [Alex].”

It is another marker of the closeness of the Liverpool squad, that they would choose to spend their time away from Merseyside working together.

Both Alexander-Arnold and Oxlade-Chamberlain are expected to retain their key roles under Klopp this season, while Woodburn is in line for another loan move after a difficult time at Sheffield United at the start of 2018/19.

Good workout with these boys

This saw him link up with injury prevention specialist Andy Barr, DPT, who worked with Daniel Sturridge in 2017 and has been described by Vincent Kompany as a “world-class physiotherapist.”

Given the Reds’ new No. 15 spent the majority of last season on the sidelines, following a serious knee injury, the hope will be he can avoid any further setbacks in 2019/20.

Holender could be seen as something of a good-luck charm given Origi’s turnaround in the second half of the campaign, having worked closely with the personal trainer in recent years.

Their association dates back as far as 2017, prior to the striker’s temporary switch to VfL Wolfsburg, and Holender has posted a series of supportive messages to Origi on Instagram:

I have never been prouder ???? #origi #liverpool @divockorigi

Words fail me! It’s truly a feat of amazing proportions that this amazing human kept going through the tough times and will be in the champions league finals!! Well done @divockorigi ??

More than anything I’m extremely proud of how hard this guy has worked the past year!! This is no overnight success, this has been a hard fought battle which has been won through blood, sweat and tears! Well done @divockorigi

An ex-footballer, who enjoyed spells as a professional in England, Norway, Sweden and the United States, injury forced Holender’s early retirement and his switch to personal training.

He also worked with Danny Ings this summer at UCLA, ahead of the striker’s £20 million move from Liverpool to Southampton.