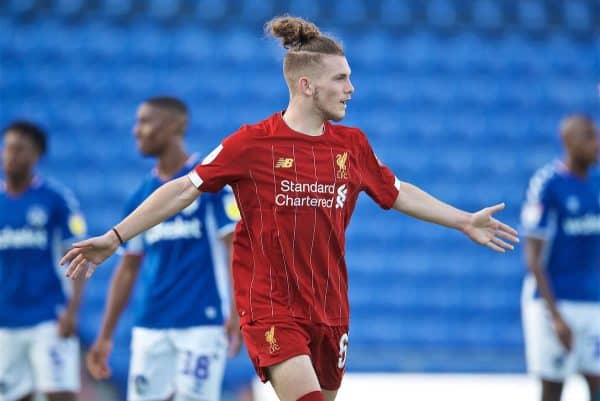 Harvey Elliott scored in his first competitive game for Liverpool, as the under-21s fell to a close 3-2 defeat to Oldham in their EFL Trophy opener on Wednesday.

One yet to receive first-team recognition got the young Reds off to the perfect start, though, with right-back Neco Williams firing a brilliant volley beyond Gregor Zabret after just four minutes.

The hosts were on level terms soon after, however, and it came through a mistake from Morgan Boyes as he sold Duncan short with his pass out and Desire Segbe Azankpo beat Dan Atherton from the resulting break for 1-1.

Oldham then went 2-1 up before the half-hour, with ex-Man United winger Chris Eagles’ free-kick exploiting a weakness for the young Reds as Alex Iacovitti struck.

But Elliott restored parity on the cusp of half-time, as he tapped in Curtis Jones‘ rebounded effort following some nice footwork to fool Zabret.

Liverpool took an early blow in the second half as Isaac Christie-Davies was forced off through injury, with 18-year-old Elijah Dixon-Bonner taking his place, while another midfielder, Lewis, began to take control.

Lewis’ ball over the top almost saw Dixon-Bonner give the young Reds the lead shortly after coming on, but Zabret was a match for the youngster’s volley.

Substitute Jack Bearne, who took the lively Elliott’s place, troubled the on-loan Swansea ‘keeper with his darting runs from attack, but was unable to convert any chances.

Ultimately, Oldham’s winner came via another set-piece, as Jamie Stott headed beyond Atherton from a corner, again highlighting a lack of organisation at the back.

The young Reds did almost grab an equaliser late on, but Bearne was just short of Curtis Jones‘ cross, and a first foray into the EFL Trophy—and for many, football against a senior side—ended in defeat.