Naby Keita could be set for an extended stint on the sidelines with a muscle strain sustained prior to Liverpool’s clash with Chelsea last week.

After having much of his debut season at Anfield disrupted through several injury setbacks, Keita is again facing a turbulent start to the campaign, ensuring he is unable to build on his promising pre-season cameos.

The 24-year-old was a notable standout in his appearances against Lyon and Manchester City, but he has yet to make a competitive appearance in 2019/20.

He was an unused substitute against Norwich and before he could make his senior bow this term, he picked up a muscle injury in the hip area during a training session at the Besiktas Stadium the evening prior to Liverpool’s Super Cup triumph.

Jurgen Klopp had revealed prior to the meeting with Southampton that the injury “is a muscle thing and we don’t know exactly how long it will take.”

But according to the Mirror’s David Maddock, Keita will not only miss the Arsenal game on Saturday as he “could be out for a while” with the complaint. 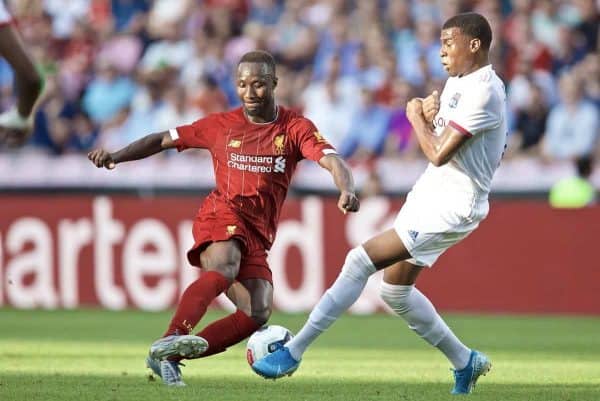 It comes as yet another blow for both the player and the club after Keita was tipped to hit the ground running, with Jurgen Klopp previously stating that “he looks completely different” this season and that both he and Keita “expect a lot” from him throughout the campaign.

Keita, who featured 33 times last season, had returned late to pre-season training after aggravating a thigh complaint, which ruled him out of the final two months of last season, when representing Guinea at the Africa Cup of Nations during the summer.

But after recovering and seemingly finding his feet with the team and honing in on his role with greater effect, the latest setback comes as an untimely blow as the Reds continue to search for a balance in midfield.

His injury, therefore, is likely to provide Alex Oxlade-Chamberlain with greater opportunities to act as the driving force in the middle of the park.