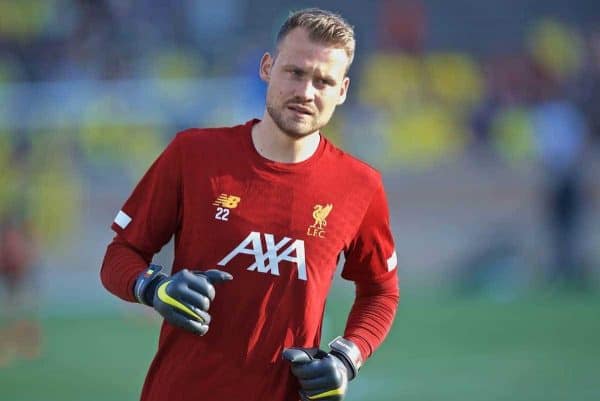 Simon Mignolet‘s long stay at Liverpool is over, with First Division A outfit Club Brugge confirming that the goalkeeper has returned to Belgium.

Mignolet joined the Reds from Sunderland for £9 million in 2013, and served as first-choice goalkeeper for three seasons before losing his place to Loris Karius.

After Karius’ struggles the Belgian returned to No. 1 duties for a short spell, before then relinquishing them again, first back to Karius and then to Alisson.

Alisson‘s unbreakable grip on the gloves forced Mignolet to consider his options, and despite claims he could stay as second choice for another campaign, the 31-year-old has now left Liverpool.

He has returned to Belgium, having flown directly after Sunday’s Community Shield clash, joining Club Brugge in a deal worth a reported €7 million.

This could rise to €9 million, with Mignolet set to take over the starting role at the Jan Breydel Stadium.

He departs having made 204 appearances for the Reds and will do so with Jurgen Klopp‘s blessing, having conducted himself with the utmost professionalism during his time on and off the pitch.

Mignolet made the perfect impact on his Liverpool debut in the first game of the 2013/14 title-challenging season, saving a penalty on the way to a 1-0 win over Stoke.

Though he largely performed well, it was clear that Klopp had different plans between the sticks, seeking a more mobile, progressive ‘keeper.

The Reds are now expected to sign free agent Adrian as Mignolet’s replacement, following his departure from West Ham earlier in the summer.

All the best, Simon!