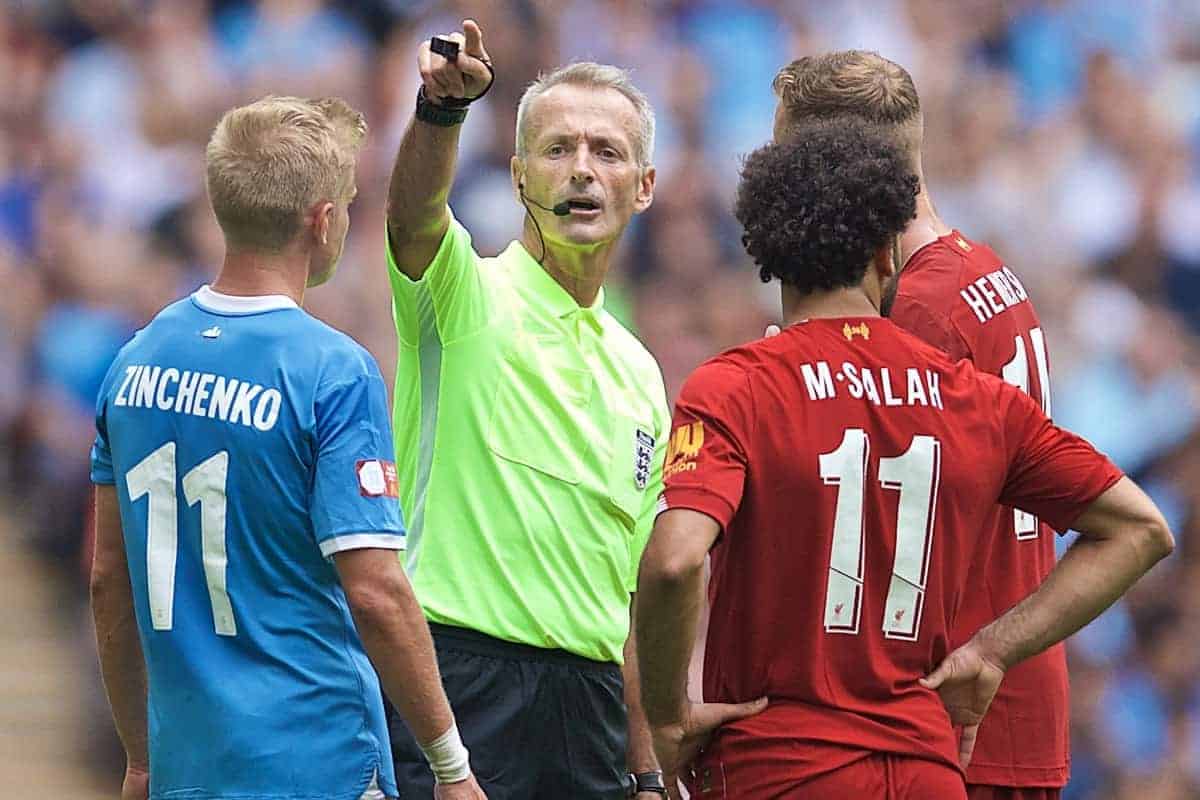 The International Football Association Board have warned that VAR is a “10-year project,” with understanding of the controversial technology in its infancy.

This is the first season that video assistant referees are being fully implemented in the Premier League, and after just two weekends it has prompted some high-profile calls.

Most prominently, these have come in Man City games, both in their opening 5-0 win at West Ham and ultimately deciding their 2-2 draw with Tottenham on Sunday.

At the London Stadium, Raheem Sterling was adjudged to have been fractionally offside with the help of VAR as he laid on a goal for Gabriel Jesus—the decision based on a millimetre.

Jesus thought he had scored a last-minute winner at the Etihad as he curled home following a corner, but the goal was ruled out after the ball struck Aymeric Laporte’s hand in the buildup.

Pep Guardiola and a host of his players, rightly or wrongly, questioned the use of VAR and the new handball rules after the game.

And many fans, not just of a City persuasion, lamented the impact it has on the emotional influence of the game.

Liverpool are yet to be meaningfully impacted by VAR this season, but there will no doubt be occasions when the Reds will feel aggrieved as decisions go against them after review.

IFAB have already confirmed that the technology’s protocol will be reviewed over the coming months, with any change likely to take place in March.

And speaking as part of ProTipster’s VAR From Perfect study, IFAB secretary Lukas Brud has stressed that VAR is seen as a “10-year project,” and highlighted its popularity with referees.

“The VAR concept is still at the beginning; it is a 10-year project until we are at the stage where people really understand how it works,” Brud explained.

“Every single referee has said to us ‘for us, it’s great. We don’t have to be afraid of killing our careers’.

“They will have someone to fall back on and they love it.”

Mike Riley, general manager of the Professional Game Match Officials Limited (PGMOL), added that “while VAR will not capture everything, it will help us make better decisions.”

There was always likely to be a teething process as VAR was introduced to the Premier League, but though there are certainly arguments for its use, most against it are based on the interpretation of new rules.

Offsides and handballs have become increasingly strict, and the main issue comes with its impact on football for fans.

If this is to be a 10-year process—and there is no indication VAR will be scrapped—there will no doubt require to be more leniency, or common sense, in its use if the game is to avoid descending into an emotionless bore.