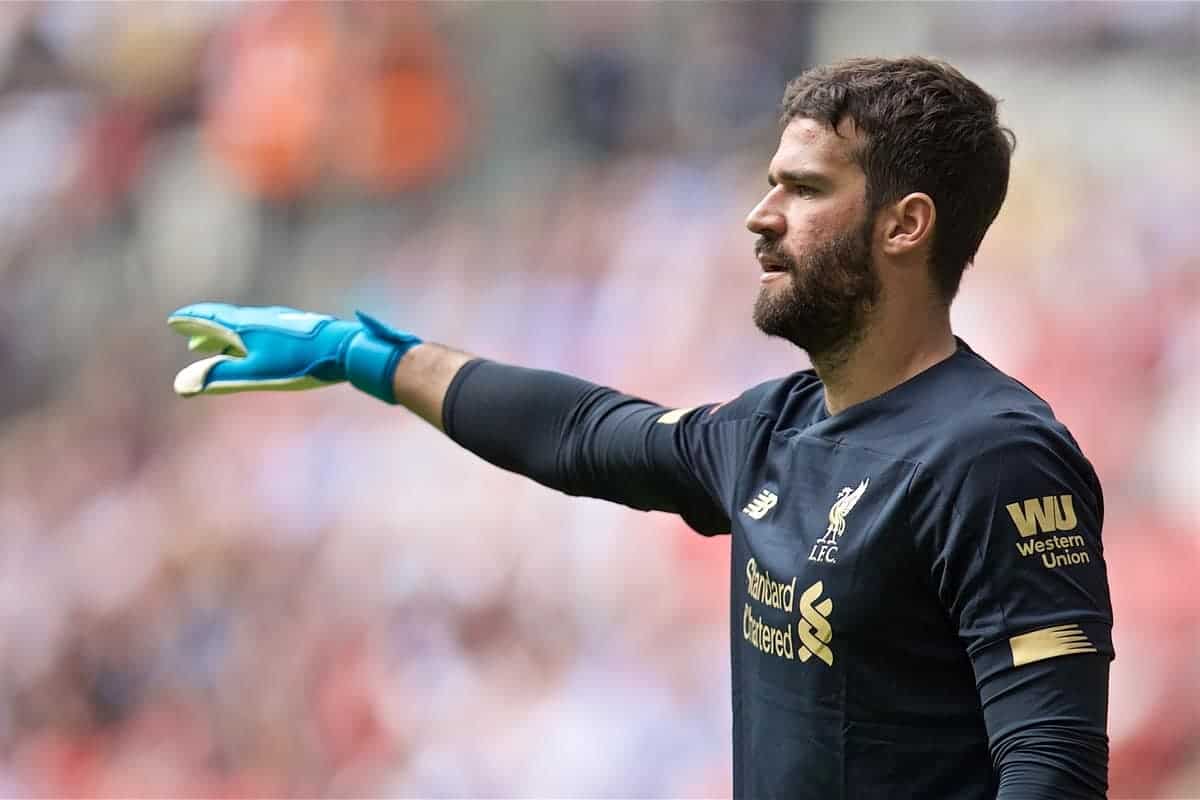 Jurgen Klopp believes Alisson is “really close” to returning to full training with Liverpool, and is hoping to welcome the goalkeeper back from Sunday.

Alisson has missed the last eight games due to calf injury suffered in the 4-1 win over Norwich, with Adrian and Caoimhin Kelleher filling in.

The 26-year-old was awarded FIFA’s Goalkeeper of the Year on Monday night, serving as a reminder of his world-class quality, though Klopp has praised Adrian for his performances as deputy.

This has relieved pressure on the Reds’ No. 1 as he works his way back to full fitness, and speaking ahead of Saturday’s clash with Sheffield United, Klopp provided a very positive update.

“Ali is on a good way, yesterday he had a full session—not with us, but with the goalkeeping coaches,” he told reporters on Friday.

“So [he is] getting closer and closer, we will see now, we have to talk to the medical department.

“Ali is not in contention for tomorrow, (but) it looks like maybe he can train with the team from Sunday on, but we don’t know 100 percent. It’s really close.”

A return to full team training on Sunday could even mean Alisson is able to return for the Champions League tie against Salzburg at Anfield next Wednesday, though it is unlikely.

The Reds host Salzburg and Leicester City before the October international break, with a trip to Old Trafford after that.

Alisson‘s rehabilitation has been aided by the form of Adrian in his stead, and Klopp agreed the Spaniard’s contributions have “made everything easier.”

“Imagine it would have been different, we would have asked for Ali after a week, ‘OK you limp, but don’t care, you can still go in goal’,” he half-joked.

“But he did and is doing a brilliant job, so yes that makes everything easier, 100 percent.

“It’s important with injuries, anyway, that you don’t rush it and we really try to never do it, but if you have no other option in the position then you maybe cut off a couple of days of rehab time, that’s how it is.

“But we don’t really like to take risks, or whatever. So we will see when he’s ready, until then Adrian is our goalie and so far he did really well.”

Klopp was also asked whether the speed of Alisson‘s recovery had surprised him, and though he said “in the last two weeks he progressed really, really well,” he rejected the claim he is ahead of schedule.

“I’m not a doctor, I take the information they give me,” he explained.

“It was serious, obviously, but about the time that we expected I don’t know actually anymore.

“It’s just in the last two weeks he progressed really, really well, so credit to the medical department, they obviously did a good job with him.

“They waited long enough until they started proper training with him again, then he could really make step by step [progress].”

Meanwhile, Klopp confirmed Sadio Mane and Divock Origi were back in training on Thursday and looked “completely normal, no issues,” but ruled out Xherdan Shaqiri.

“Milly got a knock in his back against MK Dons, early in the game, looked a bit awkward after the game but should be good,” the manager continued.

Liverpool are likely to be much-changed from the side to win 2-0 at MK Dons in midweek, with the side that won at Chelsea last Sunday expected to return after all 11 didn’t even travel to Milton Keynes.