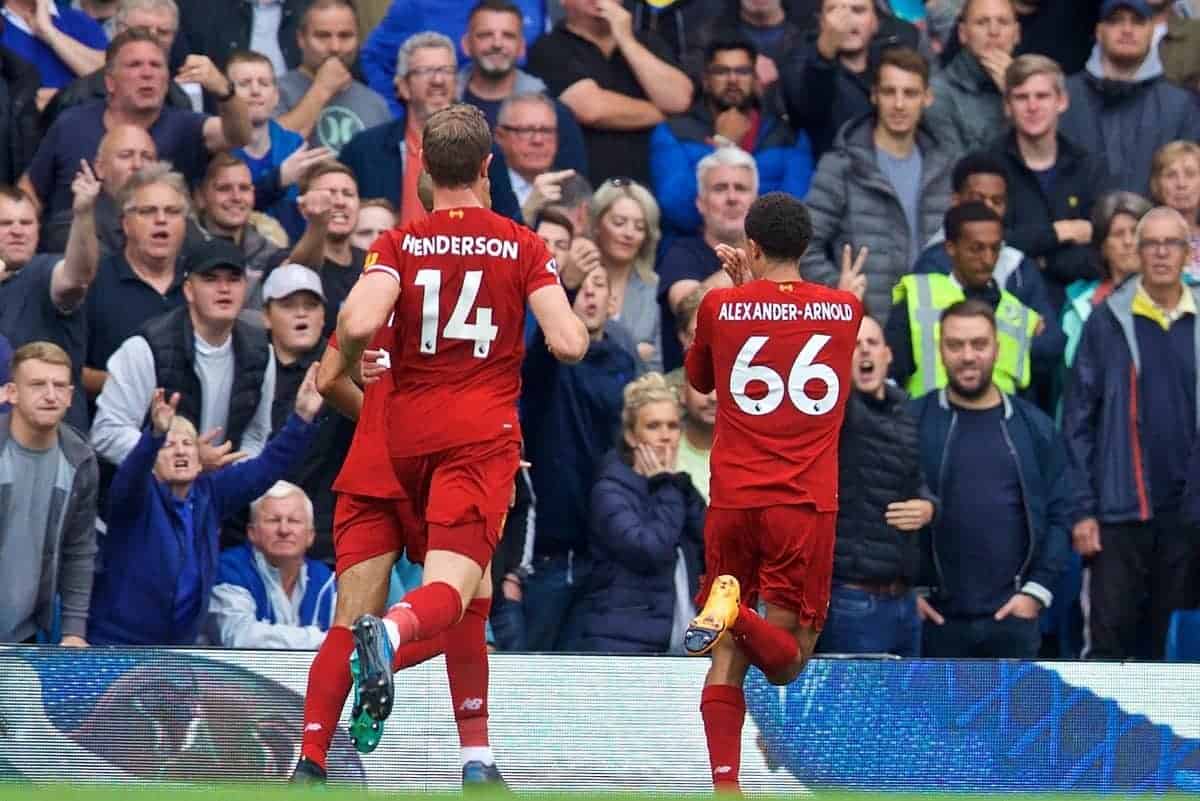 There was plenty of praise for Trent Alexander-Arnold‘s brilliant strike and the fight and determination from the Liverpool squad after their 2-1 win at Chelsea.

It was a game of two halves for the Reds who established a two-goal lead at the break thanks to a thunderous effort from Trent and a well-timed header from Roberto Firmino.

While Liverpool controlled much of the opening 45, the second saw Chelsea rise to the fore as they capitalised the Reds’ lack of midfield control—ultimately paving the way for N’Golo Kante to pull one back for Chelsea.

It set up a tense and nervy finish for the Merseysiders having been penned in their defensive half, but for Adrian, Liverpool more than stood up to the task and deservedly walked away with the win.

Speaking to LFCTV after the game, the ‘keeper also hailed Trent’s finish and ensured the team’s feet remained firmly on the ground as “we’ve done nothing yet”:

“We are on a good run in the Premier League, with good energy, good intensity and good pace.

“In the first half we did really well, and I think we deserved the three points, obviously they pushed in the second half but we defended really well.

“We are a football team; we win together and we lose together.

“The other day against Napoli we lost, I don’t think we deserved that result—it was really hard for us. But we recovered well, we’re back to the Premier League and back to winning.

“[Trent’s goal was a] great finish, great touch—a lot of pace and in the top corner so I thought it was great goal for him.

“We need to keep fighting, keep the momentum going and keep in a positive way—we’re doing really well but we’ve done nothing yet.”

Following the final whistle, a plethora of players took to Instagram to celebrate their most recent success, and it was a “decent trip to London” for the goalscorers:

A decent trip to London ?

Both James Milner and Jordan Henderson were thrilled with a vital win over a “tough opponent” and were thoroughly impressed by the “strike from the Scouser in the team”:

Big win against a tough opponent! ?? Just before the ? ??

For Fabinho it was a milestone occasion he won’t be forgetting anytime soon as he emerged victorious in his 50th appearance for the Reds:

It was a case of “job done” for Adam Lallana and Virgil van Dijk in the capital as Liverpool extended their winning run on the road in the league to a club record of seven games:

Gini Wijnaldum was impressed with how the Reds bounced back from midweek, while Adrian lauded the team’s fight to take home another three points:

What a way to bounce back! ? A BIG win on the road, we keep rolling ?? #CHELIV #YNWA

And Andy Robertson, back on social media after a brief Twitter hiatus, simply welcomed a “big three points”:

With Liverpool having struggled to emerge victorious away to members of the ‘big six’, the result at the Bridge was yet another vital step towards achieving the desired target in the league.

Klopp’s side will now turn their attention to the League Cup tie with MK Dons on Wednesday, where fresh faces both young and experienced are set to get a valuable runout.