Liverpool head to MK Dons in the League Cup third round on Wednesday night, with a much-changed starting lineup expected.

If there were any fears that the Reds’ defeat away to Napoli last week would curtail their progress in the Premier League, those concerns were swiftly erased on Sunday.

Jurgen Klopp‘s side picked up a significant and hard-earned 2-1 win victory at Chelsea, keeping up their 100 percent league record.

However, the stress of league focus makes way for League Cup commitments in midweek, as the Reds face MK Dons for the first time ever.

In truth, this is the least of Liverpool’s priorities this season, but it is still an opportunity to win a trophy and build on this new-found winning mentality.

It is also a great chance for Klopp to rest key men and give fringe players and youngsters some minutes, prior to Saturday’s trip to Sheffield United.

There should be no great issue in progressing to round four, but Liverpool’s League One opponents will be revved-up, on what will be one of the biggest nights in the club’s history.

Liverpool are still without Alisson, Nathaniel Clyne and Divock Origi, all of whom are progressing at different speeds in their recovery.

Sadio Mane will also miss out after picking up a knock at Stamford Bridge – he will train on Thursday, though – while Xherdan Shaqiri is absent with a calf issue.

Young pair Sepp van den Berg and Yasser Larouci may struggle to feature because of injury.

Naby Keita is part of the squad, however, which is a huge positive, with Klopp’s assistant Pepijn Lijnders saying the Guinean is in a “really good way”.

Klopp is expected to ring the changes at Stadium MK – he may even alter all 11 players from the Chelsea victory.

The likes of Caoimhin Kelleher (debut), Ki-Jana Hoever, Joe Gomez and Dejan Lovren could start, affording numerous members of the first-choice back-line the night off.

Others who will be hoping for much-needed playing time include Alex Oxlade-Chamberlain and Adam Lallana, having struggled to make an impact yet this season.

Perhaps most excitingly, Rhian Brewster should make his Liverpool debut and fellow teenager Harvey Elliott could also make his bow for the club after arriving from Fulham in the summer. 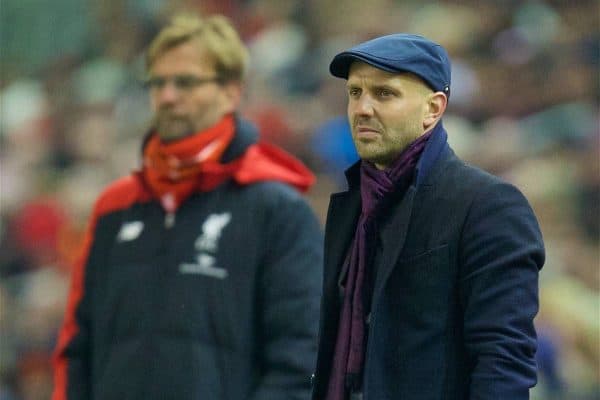 MK Dons were founded back in 2004, after Wimbledon controversially relocated to Milton Keynes, having gained approval from the FA.

Since then, the Buckinghamshire club have spent most of their time in League One – they are currently 15th in the table – although a few stints in League Two and one season in the Championship have also unfolded.

The Dons are managed by Paul Tidsdale, who Liverpool came up against in 2016 when the Reds knocked his Exeter City side out of the FA Cup, following a third-round replay.

The 46-year-old inspired his side to promotion in his first season at MK Dons last year, proving to be an instant hit with the supporters.

Former Everton youngster Kieran Agard is a threat, although just one goal so far this season pales into insignificance in comparison to his 22 last term. 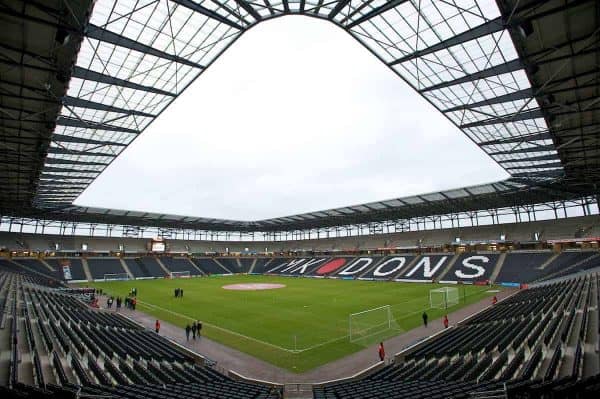 Although League Cup glory hasn’t come Liverpool’s way for almost eight years, they have actually reached at least the semi-finals in three of the last five seasons.

In 2015, Chelsea got the better of the Reds in the last four, before Man City defeated them in the final a year later, in Klopp’s first season at Anfield.

Liverpool were then beaten 1-0 in either leg of the 2017 semi-final against Southampton, which robbed them of a final meeting with rivals Man United.

The last two seasons have seen Klopp’s men exit at the first hurdle, however – they lost to Leicester and Chelsea – so an improvement is required this time around.

“I was his coach when he [joined Liverpool] from Chelsea, under-15s and under-16s.

“That he is already on the bench away at Chelsea, for me is massive. But for him of course, [he wants more].

“It makes us all proud. He’s a player who even if he starts or doesn’t start tomorrow, is a player who is every time [around] already.

“He had a long injury, it was not that easy for him. But he has goals in him, he has technique, good physicality, he’s a complete striker.

“A typical No. 9, who can come to first balls, who can score with his head, who can turn in the box, who can play one-on-one, can score a scruffy goal as well, [has an] unbelievable shot.

“And a good boy, otherwise he would not be in our team! Good character.”

Chris Williams is on matchday liveblog duty, keeping you entertained from 7pm.