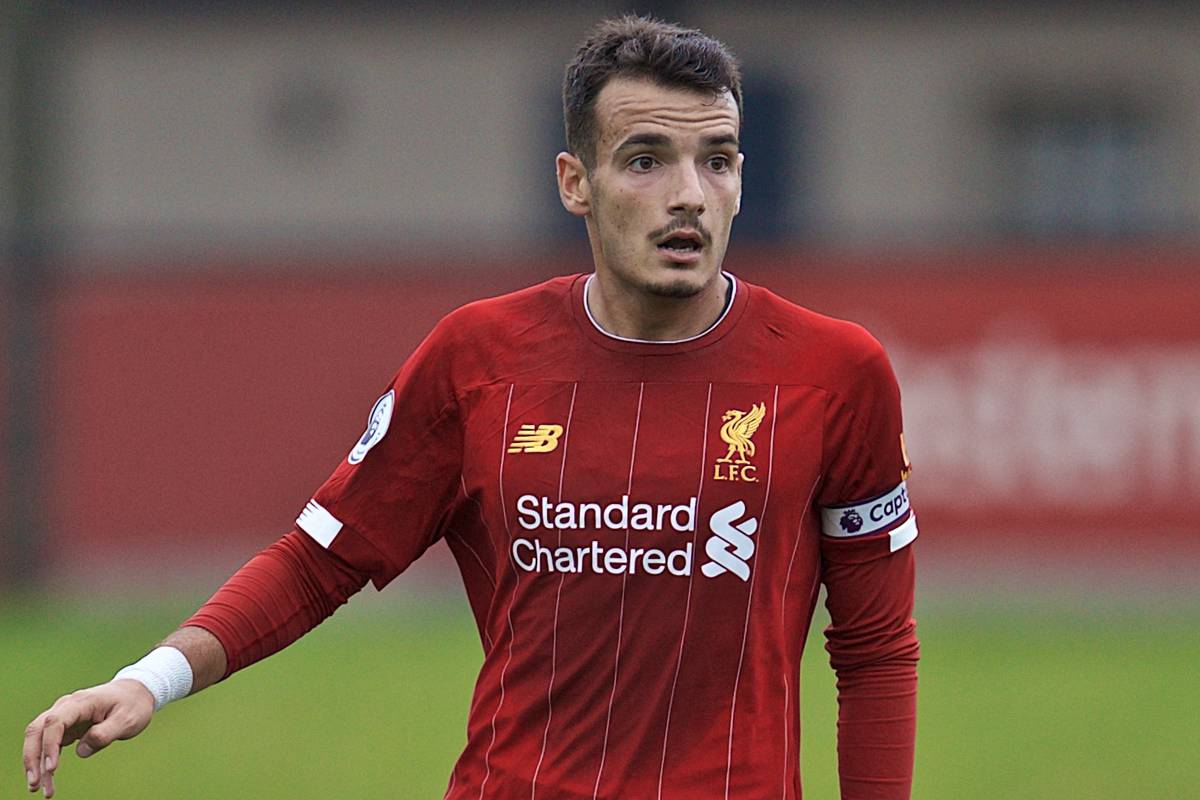 Almost three-and-a-half years on from his last senior appearance for the club, Pedro Chirivella is still a Liverpool player, with the Spaniard stuck in limbo.

At just 22, Chirivella is the Reds’ longest-serving foreign player.

Having joined in 2013, the midfielder has been with the club longer than all but two members of Jurgen Klopp‘s first team, behind only Trent Alexander-Arnold and Jordan Henderson.

He was first involved with the senior squad in 2015, when he was called into Brendan Rodgers’ squad for the pre-season tour of the Far East and Australia, along with the likes of Ryan Kent, Sheyi Ojo and Harry Wilson.

Chirivella’s debut for the first team came later that season, coming off the bench in a 1-1 draw with Bordeaux in the Europa League, while his Premier League bow came under Jurgen Klopp in 2016, in a 3-1 loss at Swansea.

Klopp withdrew him from the No. 6 at half-time at the Liberty Stadium with Lucas Leiva taking his place and, after the game, the manager claimed the youngster “forgot to orientate himself,” which is “usually his big strength.”

“That’s only one game in his long football career so that’s not a problem,” Klopp continued.

But three years and four months later, and that remains Chirivella’s last appearance for Liverpool; however, he has still gained further experience since.

Namely, this came on loan with Go Ahead Eagles in the second half of 2016/17, and a full campaign with Willem II the following season, amassing 48 outings in the Eredivisie before his 21st birthday.

The summer after his spell with Willem II has proved costly for the midfielder, though, having garnered interest from Leeds, Nottingham Forest, Swansea and Celtic, and a £3.5 million bid from Rosenborg BK.

He turned down a move to the Norwegian club, preferring to head to Spain if he left England, and he was granted his wish six months later, joining Extremadura UD on loan in January.

Unfortunately, an administrative error in processing Chirivella’s switch from Liverpool forced him out of action for the remainder of the campaign, which he spent in Iberia despite his inability to play.

His return ahead of pre-season was expected to precede a permanent exit, or at least another loan to make up for lost time.

But as Monday’s transfer deadline passed across Europe, no such move transpired and he will now stay with the Reds’ under-23s for the first half of 2019/20.

Chirivella has already worn the captain’s armband for Neil Critchley‘s side this season but that has now been passed to Curtis Jones, in a clear signal that one remains important to the club’s future and another doesn’t.

Unlike another youngster denied a summer move, Herbie Kane, he has not been included in Klopp’s 30-man squad for the Champions League group stage; unlike Kane, he is considered over-age.

It is a frustrating development for Chirivella who, when January comes around, will have spent the past 18 months since returning from life as a first-choice starter in the Dutch top flight playing either academy football or none at all.

Chirivella has many admirers among fans, coaches and team-mates both current and former, with his composed, mature displays at the base of the midfield making him a key attraction at youth level over the years.

His dominant showing in the U23s’ only win of the season so far, a 4-2 victory at Southampton in which he scored one and assisted one, provided a reminder of his enduring ability.

Pepijn Lijnders has described Fabinho as Liverpool’s “lighthouse,” and the same could be said of Chirivella in the academy: the player in which the system revolves around, and who sets the tone.

He is a player who was lavishly praised by David Vizcaino, a scout for Liverpool in Spain and Portugal, in 2015 as one of “intelligence, control, technique [and] personality,” with Vizcaino telling Marca: “Chirivella is football.”

Chirivella’s ability to control games from a deep-lying role would see him thrive in Spain, as he now wishes.

Speaking to AS in March, he reflected on the opportunities his former Valencia youth team-mates Carlos Soler and Toni Lato have received, and while he stressed he “does not regret” leaving, there will no doubt be a tinge of disappointment.

And it will be frustrating for him to watch Sergi Canos, who arrived from Barcelona at the same time he moved to Liverpool from Valencia, now thriving for Brentford after opting to leave the Reds just months after his own debut in 2016.

It appears Chirivella’s loyalty to his parent club, and the hope sporadic call-ups to Melwood would have provided, have left him in stasis, now playing the role of old head in a young U23s side.

A reprieve should come either in January or, at the latest, next summer, when his contract with Liverpool expires—as he will be free to speak to clubs outside of England from the turn of the year.

But the concern is that after so long on the fringes, high-profile interest in Chirivella will have dried up, with the player conceding himself that sides in Spain will have “lost track” of his progress since moving abroad.

So Chirivella’s 18 months in the wilderness—two years if he stays beyond the winter—can be considered a cautionary tale.

He is far too talented to fall by top-flight football’s wayside.