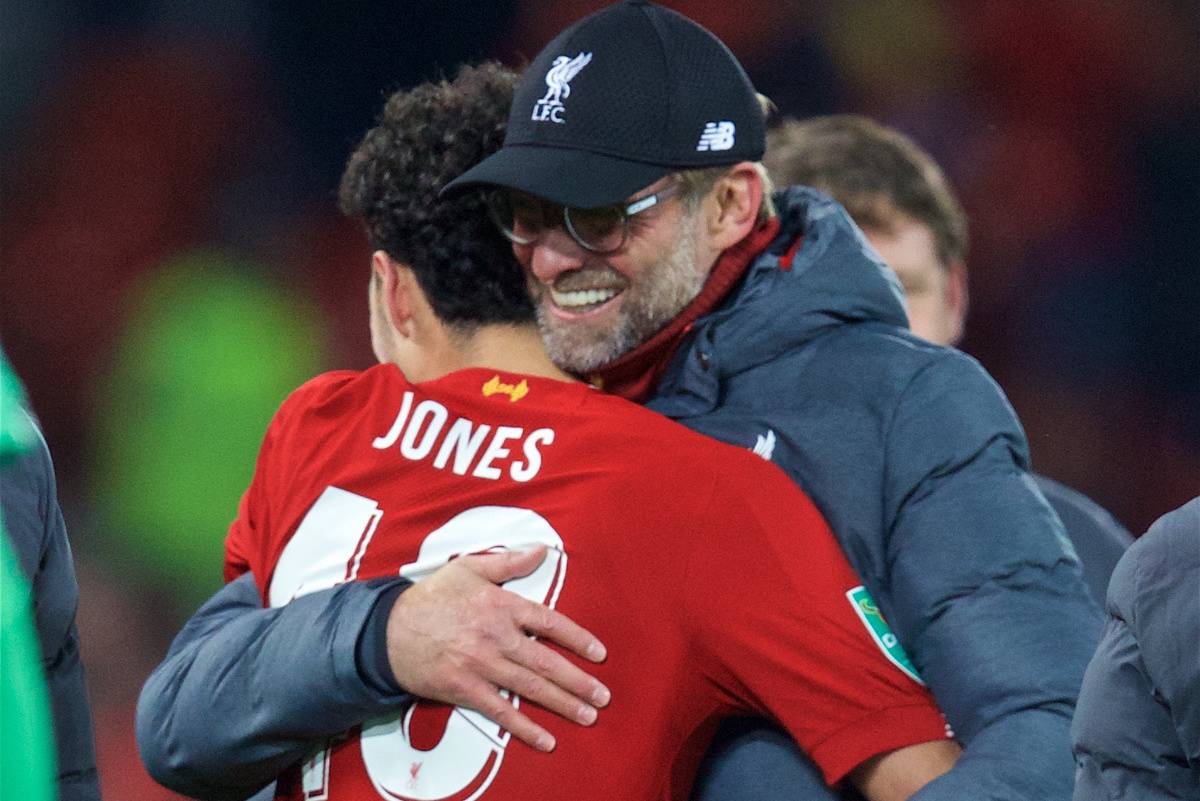 Curtis Jones was listed as the fourth penalty taker in Liverpool’s League Cup clash with Arsenal, but he prompted a switch to become match-winner.

The 18-year-old replaced Naby Keita with 35 minutes of normal time left to play at Anfield, and performed a key role in a dramatic clash that ended 5-5.

Then, with the Reds preparing for another shootout in the cup, he nominated himself for a spot-kick—given the magnitude of the situation, he was given No. 4, with Divock Origi tasked with scoring in ‘sudden death’.

But speaking after the game, Jurgen Klopp revealed that Jones’ intervention prompted a swap with the Belgian which paid off as the teenager scored the winner in front of the Kop.

“You need to be born in Liverpool, probably, to do that,” he said of the midfielder’s game-winning character.

“It was not my idea, the last time I saw the list Divock was on five and Curtis on four.

“When I saw the No. 4 coming was Divock I thought ‘OK, obviously they changed it’. Good situation!

“Curtis has no issue with self-confidence. Absolutely doesn’t struggle in that department.

Jones was one of six players to make their Anfield debut in midweek, along with Caoimhin Kelleher, Sepp van den Berg, Neco Williams, Harvey Elliott and Rhian Brewster.

For Williams, it was a first senior outing for the club in any capacity—even pre-season—and he received special praise along with his goalkeeper and centre-back.

“I’m really pleased for [Jones] like I’m pleased for Caoimhin saving that penalty, pleased for Neco [who] played an incredible game, giving the assist for Div’s goal,” Klopp continued.

“Caoimhin in general, 90 minutes being there, conceding five, cannot really do a lot in most of the situations.

“Sepp van den Berg, he played an incredible game but in these situations it’s not easy to defend, then you are a centre-half but concede five.

“But stay on track, play football, pass the ball, that’s what is the most important thing and I really liked that.”

Unlike Kelleher, Van den Berg, Williams, Elliott and Brewster, Jones had to make do with a place on the bench, despite being named Man of the Match in the third round against MK Dons.

Klopp was asked whether the under-23s captain was disappointed to have been left out of the starting lineup, but he insisted the only important factor was how he applied himself when he came on.

“That would be really crazy if I would worry about an 18, 19-year-old boy who doesn’t start the game and is disappointed,” the manager said.

“He probably was, but after the game I only told him it’s more important, really, to be decisive as long as you are on the pitch, and not who starts, who finished the game and stuff like this.

“You have to do the right things when you are on the pitch.

“I’m not sure if he was disappointed, you’ll have to ask him, but that’s nothing I worry about because that’s all part of the development.

“These boys, especially these extraordinary boys, they have like 95, 96 percent positive experiences in their career until they face the reality of adult football.

“I cannot change the world. What I can do is try to prepare them as good as possible.

“If he was disappointed, OK, not nice [for him] as a human being, but then he didn’t show it on the pitch and that’s the most important thing.”