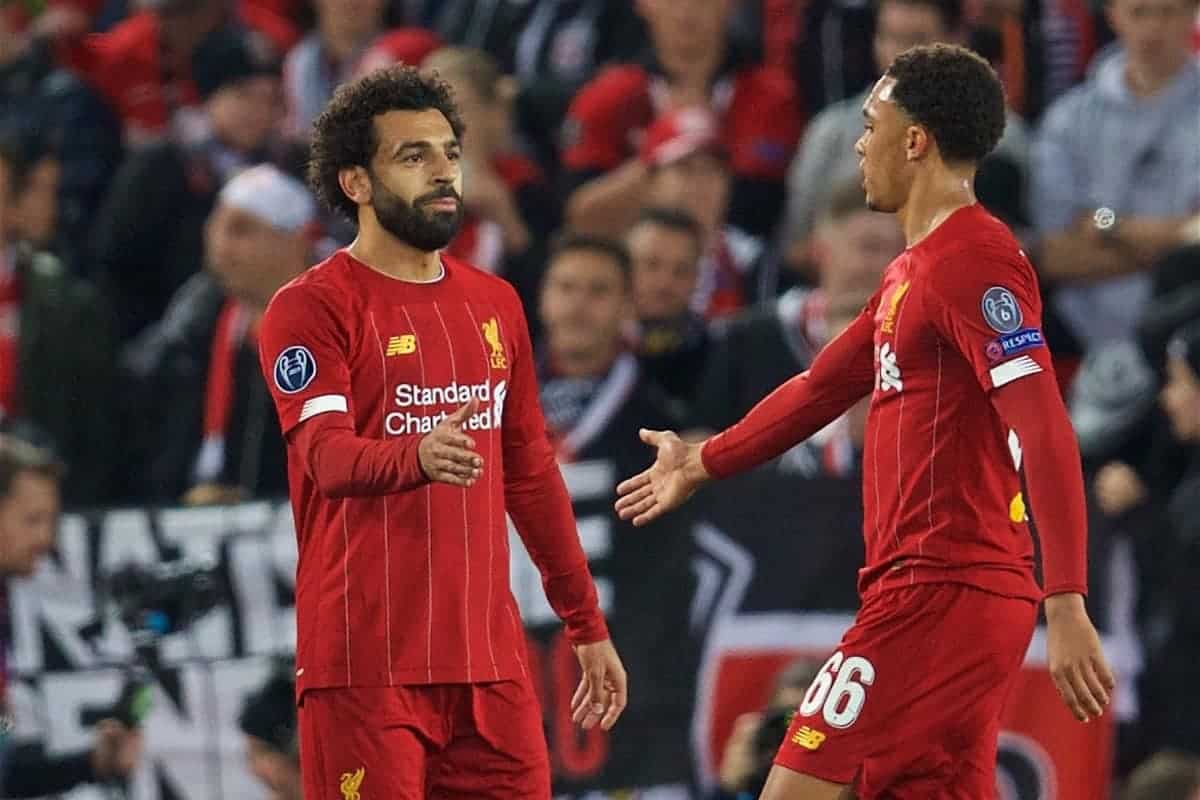 Liverpool produced a hit-and-miss performance as they beat Salzburg 4-3 on Wednesday night, picking up their first Champions League win since Madrid.

What a bizarre evening this was.

The Reds were under pressure after losing away to Napoli, but they delivered a first-half masterclass, followed by a long period of ineptitude.

Mohamed Salah made it 3-0 via a rebound, but Hwang Hee-chan pulled a goal back before half-time.

Takumi Minamino and Erling Braut Haaland completing a stunning comeback for the visitors, but fortunately, Salah finished in front of the Kop to earn Liverpool the three points.

Some dissected a crazy match at Anfield…

What a mad game.

Important win, magnificent first half, very sloppy second half. They'll get a rocket from Klopp, which is no bad thing.

Fine line between brilliance and arrogance. LFC were the right side of it for first 38 minutes and then the wrong side for the next 22. Got away with it in the end, but a lesson. If there is one club that ought to know a three goal lead is not enough…

The focus rightly will be on the defence, but I think plenty of the pressure is created from the midfield. It’s not working and as good as Fabinho is, he’s isolated and tasked with far too much.

Crazy game!! Comfortable at 3-0 and very unlike us we just didn't push on and made a lot of bad passes and mistakes. Glad to get the 3 points tonight ?#lfc ?

Got away with one there. 2nd half was a shit show in the main.

Regardless of what the manager says post match, he'll be furious with some of that tonight.

One of the maddest games of football I’ve ever seen. pic.twitter.com/UrmxjF6MS7

Phew. Work to do in this group if we play like that.

Three points is the main thing. Lessons to learn from tonight. Especially before a game like Leicester.

Mané for me is top 3 players in the world and has been for a while. Top top level.

Birthday boy Firmino was hailed for three assists on the night…

interesting match. some very silly play at times, let them right back in it with poor on-the-ball work and some very lax positional play.

Got the firepower, though. And Bobby.

Bobby Firmino is forreal the glue to Liverpool’s attack. Surreal- his technical ability that guy!

Gomez was adjudged to have struggled and Matip was missed…

Second half illustrated the importance of Joel Matip to Liverpool at present. Gomez understandably rusty after minimal games since his return.

Van Dijk and Gomez have been poor tonight, I cannot believe this.

“The game highlighted the absence of Joel Matip. His pragmatism at the back was sorely missing.”

We all do it including me ..we give certain players benefit of the doubt over others. But If lovren puts in a performance like Gomez did today there’d be carnage on LFC twitter ..never mind,3 points is all that counts.Not often under Klopp we’ve got complacent like tonight.#LFC

“Gomez was so, so, so poor tonight. He was never in a line with the rest of the defence. Positionally all over the place. Hope Matip is fit for the weekend!!”

Second half illustrated the importance of Joel Matip to Liverpool at present. Gomez understandably rusty after minimal games since his return.

Salzburg rightly received praise for pushing Liverpool to the limit…

Well then, nice little nostalgic throwback to Klopp’s early reign… Score to concede, concede and score. Reds rusty in parts but got the job done. Credit to Salzburg, they can play. #LFCdigest

Jesse Marsch has to be very proud of how his team responded to going down 3-0. His @NewYorkRedBulls team always had a similar identity and can see his imprint on this group too. Top coach. Top guy.

Massive credit to Salzburg. Gave a really impressive account of themselves. Will be a tough away for #LFC and you’d expect them to cause Napoli plenty of problems as well. Could be a much closer group than many thought it would be.

Brilliant game, that. Stunning going forward, not so much at the back.

Credit to Salzburg, breath of fresh air. Much like Ajax last year.#LFC #ChampionsLeague

Well done Salzburg. The best team Liverpool have played since God knows when. Positive, aggressive, sharp in attack. Some team.

Biggest takeaway: #LFC don’t want to go to Salzburg on the final matchday needing some sort of result.