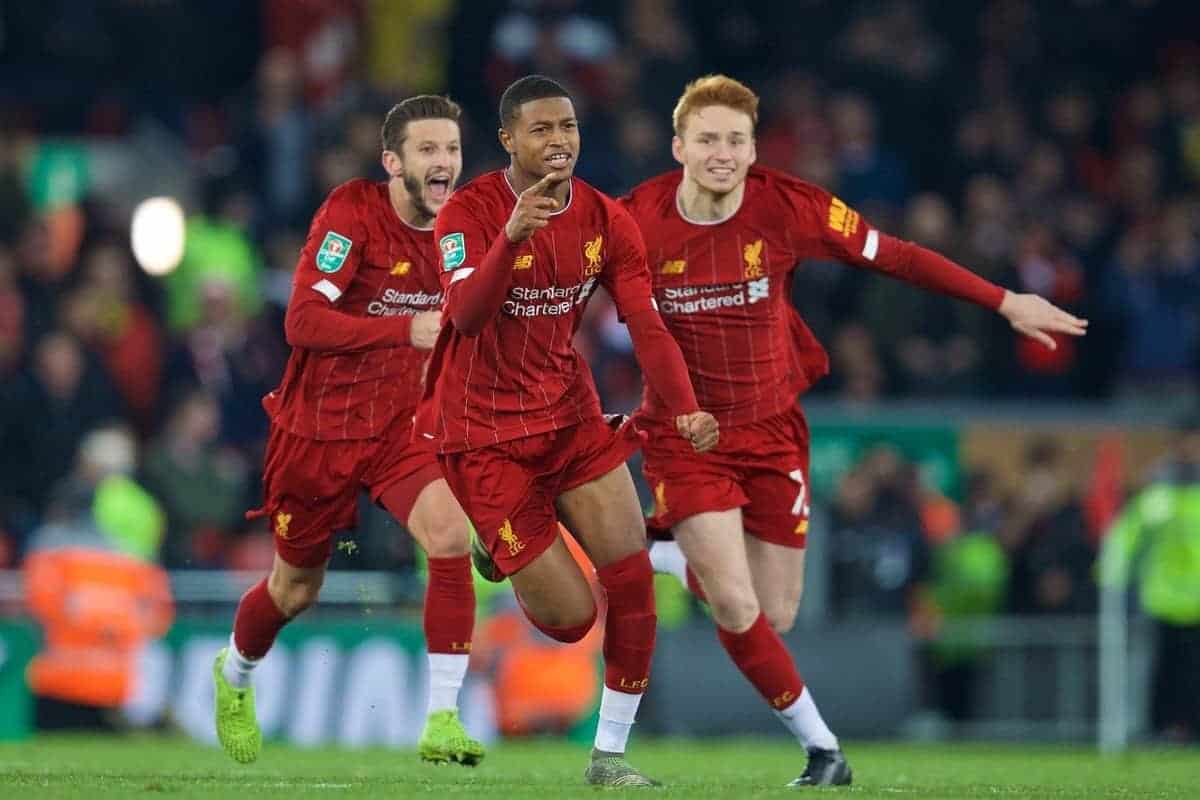 An own goal to open proceedings, a mini-capitulation—ignited by an Arsenal goal that should have been disallowed—to see us fall 3-1 in arrears, a penalty to get us back into the picture before half-time.

A fourth goal shipped via a James Milner ‘assist’, a stirring fightback to 4-4 inclusive of an Alex Oxlade-Chamberlain screamer, an equally impressive looking suspected winning goal for Arsenal at 5-4.

A Divock Origi special and a penalty shootout won at the Kop end.

Throw in an ineligible player in the previous round and Jurgen Klopp musing that he might have to pull his team out of the competition in the next round, and the 2019/20 League Cup is certainly giving us value for money.

Aston Villa away in the quarter-finals, unless we decide we just haven’t got the time and inclination for it.

Even within this, there is some previous for an ‘out there’ League Cup quarter-final at Villa for us before.

I can remember being at Villa Park for a quarter-final in 2002/03, when the kickoff was delayed because of a malfunctioning ticket office.

I seem to recall Doug Ellis tried to pin the blame on us and we won a mad 4-3 with a last-minute winner, after we’d thrown away a 3-1 lead of our own.

For around a 10-minute spell after Shkodran Mustafi opened the scoring, Liverpool indulged in some confident play. Knocking the ball around with impunity, blissfully unaware of the bedlam that was about to unfold.

Arsenal soon shook off the nature of that early blow, finding an impressive passing rhythm of their own.

This is where the heavily restructured Liverpool defence began to stand still.

It was an invitation that was too tempting for Arsenal to pass up. They burrowed their way into the game.

Caoimhin Kelleher made a smart, low save, but was let down by his static defence for 1-1.

It was comfortably offside, and I defy you to suggest that you didn’t experience even the merest of pangs that VAR would have chalked that one off had it been in operation.

The admirable Gabriel Martinelli made it 2-1 a few minutes later, when we were slow to respond to a free-kick we needlessly gave away.

Again, Kelleher had the right to feel exposed, after he got down to make a decent save.

A careless pass from Harvey Elliot set the wheels in motion for Arsenal’s third, but it also set in motion an intriguing relay of gift-giving, redemption and counter gift-giving that took us to 4-2 down.

Elliot won the penalty that Milner converted—after we had already been denied one—only for Milner to then set up Arsenal’s fourth.

Going Out Without a Coat

As football matches go, this one was akin to going for a night out in the depths of winter without a coat and every intention of walking home to save on the taxi fare.

You’re having a great time of it, but you know you’ll question the sanity of it all at some stage.

Like an enlarged version of five-a-side, it would have been wholly appropriate to bring the advertising boards into play and allow continuation of action in the event of the ball bouncing back off them and onto the pitch.

The ex-Arsenal midfielder made it 4-3 and he was unnecessarily respectful with his celebration, given he was ridiculously booed by the supporters of his previous club that were in the Anfield Road end’s lower section.

It was a wonderful goal. Ball stolen swiftly and instinctively smote in from outside the area.

Oxlade-Chamberlain is approaching peak condition, while Naby Keita continues to labour. Curtis Jones put in an excellent cameo performance after replacing Keita and was pivotal in the move that led to our Divock making it 4-4.

Origi’s strike made it a dizzying three goals in eight minutes. This whole force-of-nature football thing Klopp has going on.

It has rubbed off on the backing dancers and adolescents of the squad too. Nothing is too outlandish.

Conversely, you had to applaud Joe Willock’s effort that put Arsenal 5-4 up, but even then, there was an inevitability that we’d score again.

Entirely in keeping with the nature of the game, Origi slipped as he made it 5-5 deep into injury time.

Rhian Brewster and the outstanding Neco Williams combined to set the main man up.

Come the penalty shootout, Kelleher and Jones were the heroes. A magical evening in a tournament we might abdicate from.

What’s not to love?