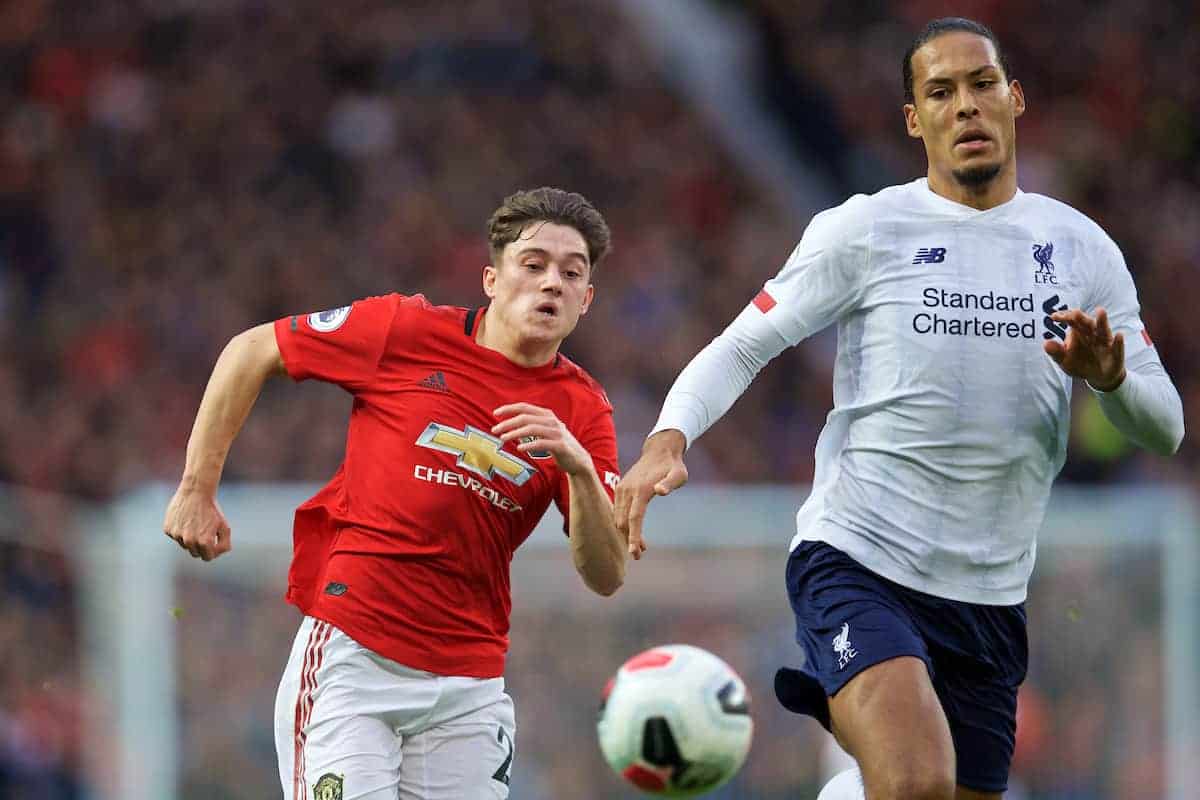 A late Adam Lallana strike was enough to rescue a point for Liverpool at Man United following a largely lacklustre performance by the Reds.

The Reds made the short trip down the East Lancs Road to go head to head with Man United, where the opportunity to extend their winning start to the season was at stake.

It was a lacklustre start for Jurgen Klopp‘s side and while contentious at best, Marcus Rashford took advantage to edge United in front, with Sadio Mane later having his effort chalked off on VAR.

The second half followed a similar trend before a rare show of quality from Andy Robertson saw Adam Lallana handed a goal on a silver platter, ensuring Liverpool claimed a point.

The manner of United’s goal incensed fans, with VAR and the referee at the centre of the controversy…

The worst part wasn’t the VAR it was that Martin Atkinson had a perfect view of it in the first place.

“ VAR….it’s as bad as Brexit. All sorts of promises, no clue what’s going on.”

Foul leads directly to attack. Doesn’t matter how far it was from goal

VAR, of course, doesn’t have the balls to overturn it. I don’t think the referees can accept the idea that they can get stuff wrong and so they set the bar so high that it’s going to be a rarity when a decision is changed. Reduces the effectiveness of the tool.

VAR bollocks aside, I'm sick of seeing us go there and shit the bed regardless of how bad United are. Players doing stupid things they'd never do in other games. There's a mental block that needs overcoming.

“We deserve to be 1 nil down, hitting long balls as the only plan is not how an aspiring champion should play.”

– Abdel on the forums.

What an absolutely abject 45mins. Yes VAR is laughable but we've got what we deserve

Don’t really understand what I’ve just watched. It was everything we’re not.

“Why is TAA putting in crosses when there’s no one in the box?
Origi is a good sub but the drop in level to the other 3 is huge.
We need to put on keita or Ox and start running at them.
Were too slow and too many back passes.” – Walshy07 on the forums.

Liverpool must come out at Old Trafford for the second-half and show what their ambitions are. Far too cautious an approach first half. Virtually little press, little-seen of overlapping wingbacks while allowing their hosts all the space and time they want.. #MUNLIV

All of you slating Lallana when he came on can kiss my nuts right now! ?

“Here it is. Omg. I don’t Fucking believe it. Lallana. Wow. Color me shocked. Color me FUCKING SHOCKED.”

Adam Lallana's first goal for Liverpool since May 2017. #LFC

Me: ‘Klopp has lost the plot brining on Lallana’

Also me; ‘Great sub by Klopp, he know best and knows the players’

Well done Adam Lallana, you want your players in the right place at the right time when the time comes and he was there for the tap in. We needed it. Big point.

In the end, the performance was not up to scratch but the Reds’ substitutions & character shone through…

Worst Liverpool performance since Napoli (a) last season. Excruciatingly bad. Found mid-game suggestions relating to the team’s mentality very odd considering the run they’ve been on and what they’ve won in that period. Idea obliterated by the timing and manner of the equaliser.

Eighty-five minutes of the worst football we've seen from this side in 2019 and somehow got a point out of it. I guess we'll take that?

That was graft that. Take a point all day any day considering how poor we were and it’s United away. 6 points clear and top of the league.

went from "we're gonna beat this lot" to "oh fuck it's happening again oh well" to "a draw that feels like a win!" to "I'm mad Liverpool didn't win at the end" what a ride

Liverpool awful for 80 minutes. As bad as I’ve seen them.

Lallana & Keita both excellent when they came on. As bad as we were, it’s a good point. #MUNLIV #LFC

For 70%of that game we were as poor as I’ve seen for a long time!!and still came away with a point,Changes where better late than never!!and made a big difference.ynwa

Thought Naby Keita made a real difference for #LFC off the bench, by the way. Easier against tiring legs but he showed a composure around the Manchester United box that had been completely lacking all game. His change of pace in possession brought about the equaliser, too.