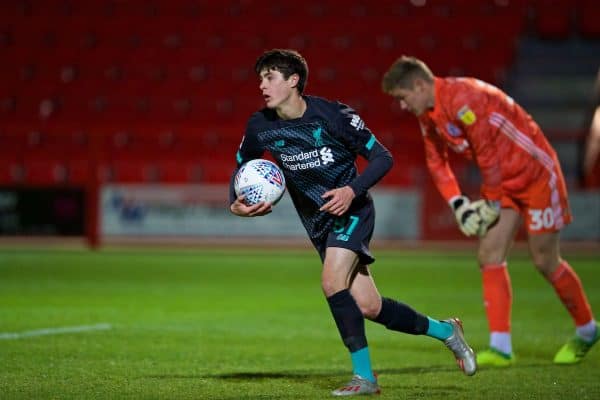 Liverpool’s youngsters have had a brief taste of senior action this season, but the U21s’ run in the EFL Trophy is over after a 5-2 loss at Accrington.

Liverpool’s youngsters went into their final group stage game knowing a win was a must if they wanted to prolong their exposure to senior action, but fell short at Accrington.

An incredibly young side gave a more than reasonable account of themselves, even taking an early lead against the League One outfit, but eventually succumbed.

With the likes of Rhian Brewster, Sepp van den Berg, Neco Williams, Curtis Jones and Harvey Elliott all unavailable due to involvement with the first team on Wednesday night, and Ki-Jana Hoever on international duty, it was a much-changed and inexperienced side which took on the third-tier professionals.

Elijah Dixon-Bonner, who has had a great campaign thus far at youth level and played more games than any other Academy player, opened the scoring for the Reds after just eight minutes, giving early hope that perhaps Liverpool could pull off the unexpected—hope that lasted until the half-hour mark.

Accrington then showed both their superior physical prowess and their experience; this was a Liverpool U21 side in name only, with two 16-year-olds in the lineup and nine players aged 18 or under.

Two goals before the break put the home side ahead, before they racked up three more in the second half, with set-pieces playing a predictably big part.

Leyton Stewart continued his fine form in front of goal with the Reds’ second of the night, 13 minutes from time.

The result ensured Liverpool finish bottom of the four-team group, having lost 3-2 to Oldham and drawn 1-1 with Fleetwood, losing on penalties for the extra point in that game.

However, despite that, Neil Critchley had already stated that the experience of being involved in the competition had been of tremendous benefit to the young players, with this being the first year Liverpool have competed in the EFL Trophy.

With this clutch of players getting a taste of senior action, and more to do likewise at Anfield on Wednesday in the League Cup, it’s clear that the youth pathway at Liverpool still offers enormous benefits to those fortunate to play a part.

Next up for the U23s is the mini-derby and another chance to experience a very different type of big occasion.