There was a number of reasons to celebrate for Liverpool’s player following their 4-1 win at Genk in the Champions League.

Jurgen Klopp’s Reds were off on another European adventure on Wednesday, with Belgium the destination as they looked to end their run of away defeats in the group stage of the competition.

And Alex Oxlade-Chamberlain kicked the night off in perfect fashion having drilled the ball into the bottom corner before the clock could even strike two minutes to set Liverpool away.

It was a momentous occasion for Liverpool’s No. 15 as it ensured it was his first goal since April 2018, but he was not finished there as he added both his and the Reds’ second after the interval with a dazzling outside of the foot finish from distance.

He set the platform for what would be a valuable three points as both Sadio Mane and Mohamed Salah followed him on the scoresheet.

And after threatening for much of proceedings, Genk would find a consolation late in the piece to deny the Reds what would have been a rare clean sheet.

For one of the standouts on the night in Oxlade-Chamberlain, it was exactly where he “wanted to be” after returning to full fitness and contributing to his sides’ success. 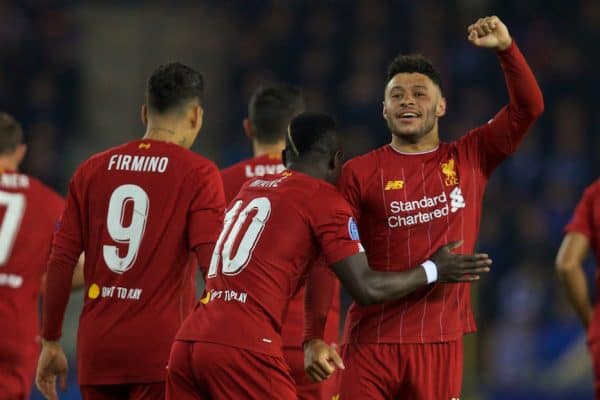 When speaking to LFCTV after the final whistle, the England international talked through his stunning second goal and was quick to share his delight at being back on the park and having his visualisations during his injury spell come to fruition:

“It was a lot longer [to score] than I had predicted in my mind, I had one down for the first game of the season but that didn’t transpire!

“I’m delighted to get a start and round it off with a couple of goals and a good win, it’s what I wanted to get back doing.

“Being in this team and contributing to us progressing whether it’s the Champions League or the league is where I wanted to be.

“There was a lot of times on the bike where I’d visualise those goals and it keeps you going so it’s always nice to put that into practice and to see hard work getting rewards.

“[The second] was a nice finish in the end. It was a setback from Bobby and it was a bit quicker than I would’ve liked for the first time shot so I just thought I had to guide it and I didn’t trust the left peg so I went for the outside of the right.

“They don’t always come off a lot of the time, they’ll be going over the road at Melwood in someone’s garden so it’s nice to see it go in!”

“I feel I’m definitely fit enough and I’m in a good place where I feel like I can go and effect the games, whether I’m at my absolute best, I don’t know yet, but I’m sure with more games and minutes that’ll come.”

After the final whistle players took to Instagram to celebrate and James Milner was full of praise for Liverpool’s finishers on the night, and while Ox himself was overjoyed to twice find the net he did not shy away from the fact that there is “still work to do”:

Nice to get 3?? @championsleague points away from home – some decent goals out there tonight ???? #Oxoutsidethebox #slipperyMo #rightback #leftback #backintheunion

Nice to get a couple of goals tonight ?? good win in the end but still work to do. Shout out to the travelling fans ?? get home safe. #ynwa

Joe Gomez and Sadio Mane, meanwhile, were upbeat as the Reds notched a “good win” on foreign soil:

It was a day to remember for Fabinho who marked his birthday with an “amazing performance”, and similarly for Alisson and Roberto Firmino it was a case of lauding the three points and their teammates:

And for Naby Keita and Gini Wijnaldum the travelling Kop received their thanks for their continued support throughout:

Well done boys! Great to be back! Thanks to all traveling supporters????

A fantastic @championsleague night! ? A win on the road and 4 goals ?? Big thanks to all traveling supporters ??? #GENLIV #UCL

Although another clean sheet went begging, Liverpool will be buoyed by the result having secured their first away group stage win in the competition in four attempts.

But a change in focus is now required as a quick turnaround is again on the cards for Klopp’s men as Tottenham await at Anfield on Sunday, where an opportunity to return to the Premier League’s winner’s board awaits.