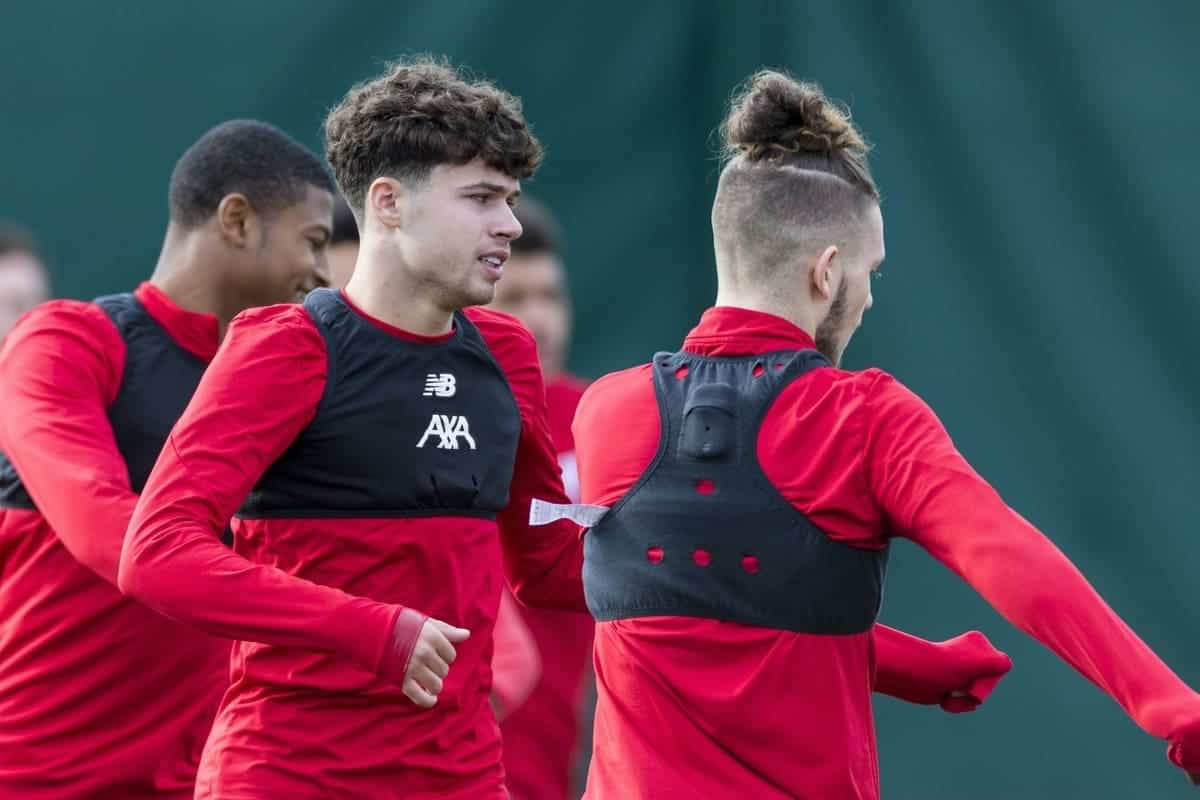 Liverpool have called academy right-back Neco Williams into their first-team squad for training, with the Welshman involved in pre-Genk preparations.

The Reds headed out on the Melwood turf on Tuesday afternoon without two of their right-back options, with Trent Alexander-Arnold and Ki-Jana Hoever both absent.

Alexander-Arnold is ruled out for the Champions League clash with Genk on Wednesday night with a virus, while Hoever is also unavailable.

With the 17-year-old part of the Netherlands squad at the Under-17 World Cup, he was left out of Jurgen Klopp‘s extended squad for Europe, with Sepp van den Berg drafted in instead.

Hoever’s departure to Brazil has led to Klopp calling upon Williams in recent weeks, with the 18-year-old joining the senior setup ahead of Sunday’s 1-1 draw with Man United.

And he remained part of the squad training in front of the cameras before the flight to Belgium, alongside fellow youngsters Harvey Elliott and Rhian Brewster.

Given the competition for places at right-back from the first team down through the academy, this is a welcome opportunity for Williams when it perhaps seemed like one would not materialise.

Williams joined the Reds at pre-academy level as a six-year-old, and opted to sign with Liverpool on a full-time basis when he turned nine, despite interest from United.

He began life as a striker, before shifting to the right wing and then, later, to right-back, where he remains; his younger brother, Keelan, is also on the books.

The Wales under-19 international has made the joint-most appearances for the academy sides so far this campaign, with 13, level with Elijah Dixon-Bonner.

He has scored three goals and laid on two assists from right-back, including excellent strikes against Oldham Athletic and Fleetwood Town in the EFL Trophy—showcasing his ability against Football League opposition.

At his best in attack, Williams is also developing his defensive game, and it is telling that he is trusted as a starting right-back at U23s level despite his young years, and now this is translating to the senior stage.

Williams signed his first professional contract with Liverpool in January, and this is set to expire in 2021.

He will not be part of the matchday squad in the Champions League—though he is able to be named on List B—and he is expected to start for the under-19s in their UEFA Youth League clash with Genk earlier on Wednesday.