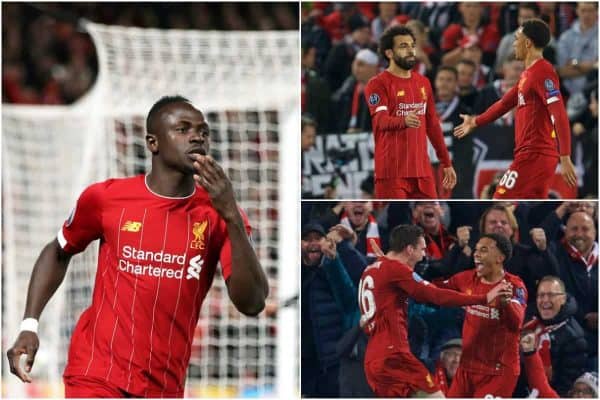 Liverpool were hit-and-miss in a nerve-shredding 4-3 win over Salzburg at Anfield, with the Reds returning to winning ways in the Champions League.

Jurgen Klopp‘s side lost at Napoli in their maiden European outing of the season, so victory was important as a free-flowing Salzburg side came to town.

There was one change from the team that beat Sheffield United 1-0 last weekend, with Joe Gomez coming in for the injured Joel Matip.

The Kop held up a brilliant banner reminding everyone of Liverpool’s current status in the European game.

Gomez understandably took a little time to find his feet, in what was a rusty showing from the centre-back.

Sadio Mane fired Liverpool in front after a gorgeous one-two with Roberto Firmino, much to the dismay of his former supporters in the away end.

Andy Robertson then added a brilliant second, set up by full-back partner in crime Trent Alexander-Arnold, who celebrated with him.

It was soon 3-0 thanks to Mohamed Salah, although he was a little more muted in comparison to Robertson.

Hwang Hee-chan pulled a goal back for Salzburg before the interval, acting as a warning to the Reds.

When Takumi Minamino made it 3-2, panic started to set in and Liverpool’s players were stunned when substitute Erling Haaland levelled soon after.

Thankfully, Salah pounced in front of the Kop to snatch victory for the hosts, on what was an unforgettable night on Merseyside.

Next up for Liverpool is the visit of in-form Leicester on Saturday afternoon – they could drop their first Premier League points of the season if they don’t improve.