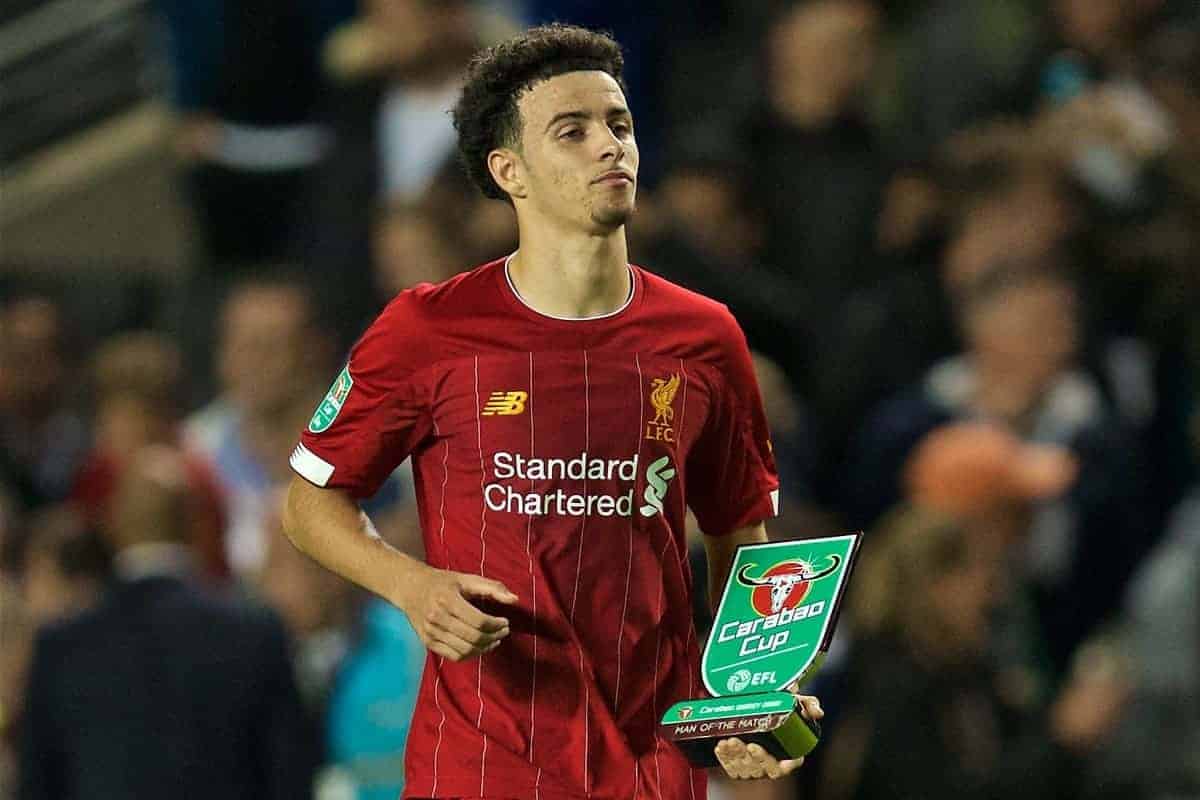 Though Arsenal will not have been Liverpool’s ideal draw in the League Cup fourth round, a step up in opposition gives one young Scouser a big chance.

While Trent Alexander-Arnold doesn’t have the longest name in Liverpool—that honour goes to Katarina Johnson-Thompson by three letters and a long jump—the Reds’ right-back is the only Scouser in our team.

At least he’s usually the only Scouser in our team.

Alexander-Arnold could make his 100th first-team appearance against Arsenal in the League Cup, but if Jurgen Klopp decides to rest him—although with Ki-Jana Hoever away on international duty he has one less option—the only Scouser in our team will be a talented kid making his Anfield debut.

I sat down with Curtis Jones at Melwood on Friday afternoon for an interview that will be published in the Liverpool vs. Arsenal Official Matchday Programme.

He’s an old head on young shoulders. Toxteth-born Jones is only 18, but he speaks with considered thought and maturity. If you get the programme and have a read of the interview you’ll see what I mean.

Curtis is also a very, very good young footballer, yet one who seemingly has very little hype surrounding him compared to some of his teenage team-mates such as Rhian Brewster and Harvey Elliott.

Which is somewhat baffling given how well he played during Liverpool’s 2-0 League Cup win at MK Dons in the last round.

Jones walked off with the man-of-the-match award that night despite James Milner running the game from left-back, Alex Oxlade-Chamberlain showing signs he was ready to spark into life (as Genk found out last week) and Elliott hitting the woodwork twice in a lively display. That in itself tells you how well Jones played.

He’s good on the ball, uses it well, can pick a hole in a defence and is increasingly getting amongst the goals. He may even yet be the creative, attack-minded midfielder that Liverpool are often accused of lacking in games that are tighter than the leg room on the Kop.

Yet there isn’t much of a clamour, on social media or back in the real world, to see him get more of a first-team opportunity. The question is why not?

Perhaps the perception is that he’s not ready. Maybe you’ve not seen enough of him captaining the Liverpool under-23s in Premier League 2 and the under-19s in UEFA Youth League to judge?

Perhaps Liverpool have done such a good job of protecting him that he’s slipped under the radar somewhat?

Or, most likely, it’s because Liverpool have performed so consistently well over the last two seasons, and now have such a strong squad, that it doesn’t feel like introducing young, developing players is quite so urgent at present.

The pathway from academy to Anfield has become hasn’t exactly become snarled up as Klopp’s starting XI at MK Dons showed, but three big problems for the likes of Jones are Mo Salah, Sadio Mane and Roberto Firmino.

I’ve lost count of how many times I’ve heard them described as the best front three in the world and I’m not about to argue against such an opinion, but the consequence of their brilliance is that nine times out of 10, when fit, all three start every game.

Not only does mean experienced senior players such as Divock Origi, Adam Lallana and Xherdan Shaqiri spend more time on the bench than on the pitch, it means younger attack-minded players such as Jones, Brewster and Elliott are struggling to even get on the bench in the Premier League and Champions League.

As a result many young players go out on loan for ‘experience’, but history shows that most Liverpool youngsters who are loaned out are subsequently sold when they return rather than integrated into the first team.

Origi is the only current player to have bucked the trend and he cost just shy of £10 million to sign in the first place.

Sheyi Ojo, Ovie Ejaria, Ben Woodburn and Harry Wilson are all on at least their second loan stints away from Anfield and I’d be genuinely surprised if any of them had long-term futures at Anfield now. One at the most, maybe.

During the Premier League era most of the young players who have broken into the first team and stayed there for a half-reasonable to lengthy amount of time have done so in periods when Liverpool have been underachieving and needed fresh impetus.

From Steve McManaman to Jamie Redknapp to Robbie Fowler to Dominic Matteo to Jamie Carragher to Michael Owen to Steven Gerrard to Stephen Warnock to Raheem Sterling to Trent Alexander-Arnold, they all came in at times when Liverpool weren’t challenging for the Premier League title.

Mike Marsh, Don Hutchison, David Thompson, Stephen Wright, Neil Mellor, Jon Otsemobor, Martin Kelly, Jay Spearing, Andre Wisdom…the list goes on with Jon Flanagan being the one player, off the top of my head, who did establish himself during a title challenge.

My point is that hugely talented kids like Curtis Jones aren’t featuring in the Premier League due to the quality of the players in front of them, not due to a lack of ability, effort and application.

That’s why matches like Liverpool vs. Arsenal in the League Cup are hugely important for kids like him.

If he performs well, gets a goal, makes a match-winning contribution, whatever, it puts a thought in Klopp’s mind.

Does he need some of his more senior players, or to sign anyone else, when he’s got the Jones boy ready to make an impact? And when does he get that opportunity in the Premier League or Champions League?

When Klopp believes in a young player he’ll give them that responsibility.

He didn’t buy anyone to replace Daniel Sturridge (or Danny Ings and Dominic Solanke for that matter) because he has faith in Brewster, while Alexander-Arnold is proof of why the Liverpool manager does give them opportunities.

Whether the manager yet has that faith in Curtis Jones remains to be seen, but if he starts against Arsenal he’s got a huge opportunity to showcase his talent and convince Klopp that, longer term, maybe Trent Alexander-Arnold won’t be the only Scouser in our team.