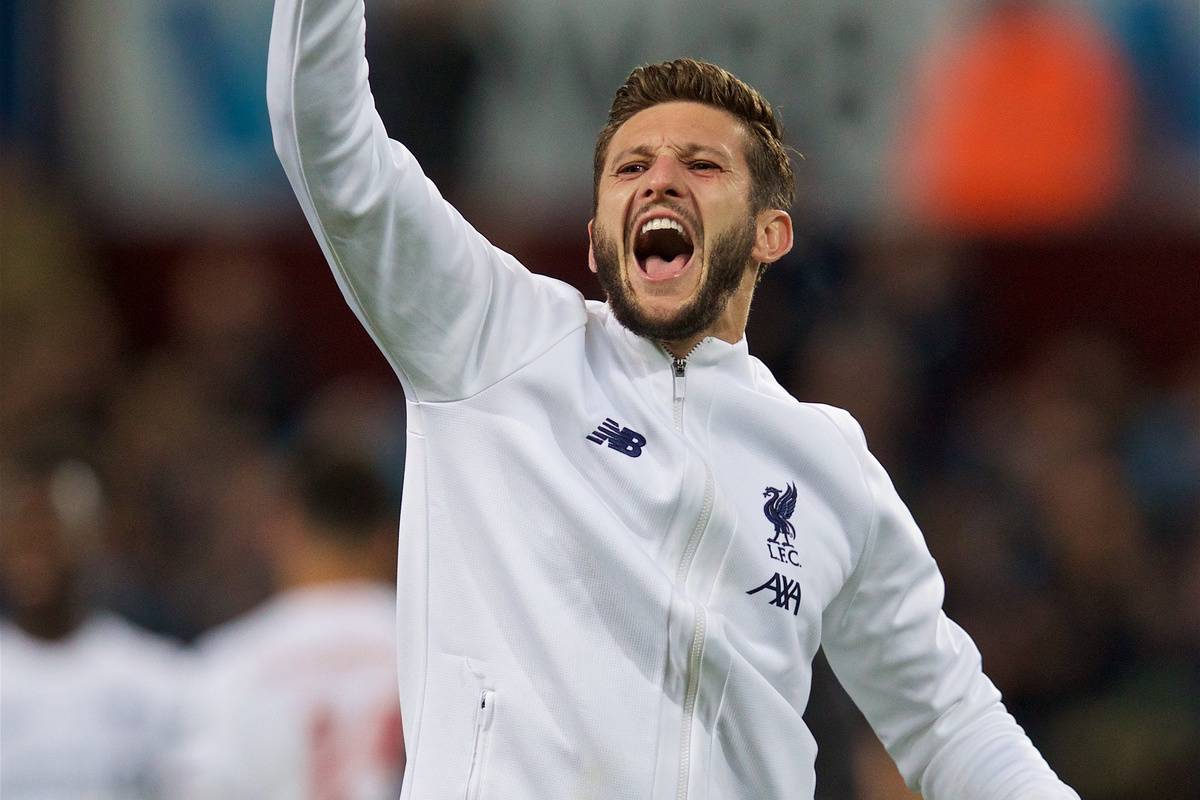 Adam Lallana is the subject of far-reaching interest as he approaches the final six months of his contract, but reports on his situation are incomplete.

Lallana has taken up a more regular role for Liverpool in recent weeks, starting two of the last five games and coming off the bench to score in another.

The 31-year-old filled in for Fabinho in Saturday’s 2-1 victory at Aston Villa, taking up duties in the No. 6 position for the first time in the Premier League.

He produced a reasonable performance, though the Reds’ comeback from 1-0 down was achieved after he was brought off, with Naby Keita on the field in his place.

Despite persistent injury issues diminishing his importance to Jurgen Klopp, Lallana has been largely fit throughout last season and this term so far, but competition for places has reduced his appearances.

And with just over six months remaining on the deal he signed in 2017, the Telegraph report that clubs in the Chinese Super League and MLS are weighing up moves.

John Percy writes that Lallana “will be offered a new deal” by his current club, but “could be set for a move away in January if clubs step up their interest when the transfer window re-opens.”

It has been previously reported by The Athletic‘s James Pearce that the Reds are opening talks over a new short-term contract for their No. 20.

But both he and Percy agree that he is “likely to be offered longer terms and the promise of more regular football away from Anfield and may review his options early next year.”

Pearce had suggested Serie A as a possible destination for the the midfielder; he is able to sign a pre-contract agreement with a foreign club from January 1, as Joel Matip did with Liverpool in 2016.

However, Matip’s situation earlier this year—prior to signing a new five-year deal with the Reds—highlights a detail overlooked in analysis of Lallana’s future.

When the England international agreed new terms with the club two-and-a-half years ago, it was widely reported that he had signed a three-year contract with an option for a further 12 months.

This was covered by the likes of the BBC, the Press Association, the Telegraph, the Guardian and Pearce himself when writing for the Liverpool Echo.

As they did with Matip earlier this year, Liverpool could therefore trigger the clause and automatically tie Lallana down until 2021, without the need for new talks.

This would take beyond his 33rd birthday, which regardless of Klopp’s resolve to retrain him as a deep-lying midfield option, would likely herald a natural end to his top-level run.

If true, this would put him in line with the club’s highest earners, which does not reflect his role within the squad.

To suggest his best chances of regular first-team football are in China or America would be a disservice to Lallana, but his case is similar to that of Daniel Sturridge prior to his exit.

The striker, of course, eventually joined Trabzonspor in the Turkish Super Lig.