The media were full of praise for Alex Oxlade-Chamberlain’s performance in the 2-1 win against Genk, but felt Liverpool were too focused on Man City.

It was harder work than envisaged but the Reds just about got over the line to earn a crucial three points and move to top spot in Group E.

The Reds were certainly not at their best – to be expected with six changes to the XI – but with one eye on Man City’s impending Anfield arrival, it was a case of job done.

Here’s what the media made of the victory.

The watching journalists were all impressed with Oxlade-Chamberlain’s performance… 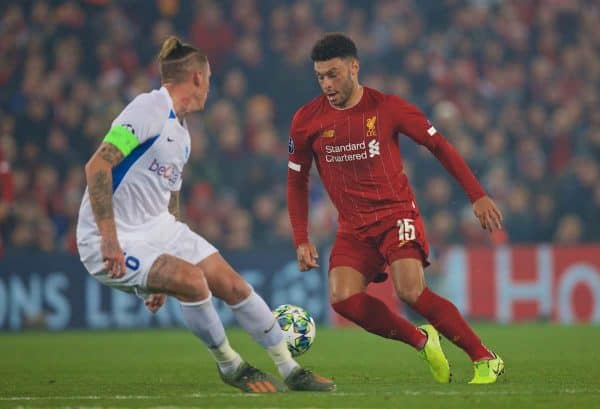 The Mail’s Ian Ladyman thought the goal-scorer produced his most archetypal display yet, and noted how the No.15 is an “embodiment” of Liverpool’s philosophy:

Liverpool are always at their best when moving forwards at pace with the ball and here Oxlade-Chamberlain was the embodiment of that philosophy.

The 26-year-old played with the confidence and conviction of someone who trusts his body again and after a big injury that is at least half the battle.

Standard Sport’s David Lynch wrote how Genk “couldn’t cope” with Oxlade-Chamberlain and thinks the No.15 will soon force his way into Klopp’s first choice midfield

But here, he combined goalscoring exploits with a more rounded showing that proved he is the midfielder most likely to break up Klopp’s current preferred trio before too long.

Genk simply couldn’t cope with Oxlade-Chamberlain’s penetrating runs and link-up play all night, and we are soon likely to be saying that about Premier League opposition too.

Writing for Goal.com, Neil Jones analysed Oxlade-Chamberlain’s overall display deputising for Roberto Firmino, and felt that while he did a decent job, midfield is definitely his best position:

The experiment, it has to be said, produced mixed results. Oxlade-Chamberlain was lively enough when dropping deep, and looked good leading the charge when Liverpool found a chance to counter at speed.

However, in terms of link-up play, Firmino he is not. His future in this team is in midfield and he needs games, and sharpness, before he starts regularly, you feel.

Oxlade-Chamberlain’s performance showed he should be in Klopp’s Club World Cup travelling party, and not left at home for the League Cup tie with Aston Villa, wrote the Mirror’s Andy Dunn:

You can guess where Oxlade-Chamberlain will want to be.

There have been signs in recent weeks – certainly from the bench at Villa Park on Saturday – that he could soon be playing a more influential part. And those signs were clearly visible again.

And he certainly looked a player who will believe he should be at a Club World Cup rather than a Carabao kickabout come December.

And the Mirror’s Simon Mullock reckons Oxlade-Chamberlain should be given an England recall by Gareth Southgate following his recent impressive form:

Liverpool have been nursing their midfielder back to full fitness after a year-long recovery from a knee injury, but a return to the England squad cannot now be far away.

The Ox is really starting to hit his straps in terms of both performances and goals. After playing a key role as a substitute in the come-from-behind win at Aston Villa at the weekend, he marked another Champions League start against Genk by grabbing his fourth goal in four games. 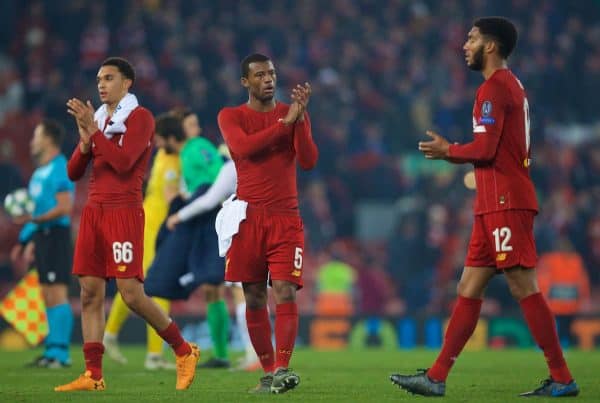 The Telegraph’s Chris Bascombe thought that Sunday’s clash with City was clearly on the minds of Liverpool’s player and staff and felt this detracted from the performance on the night:

Everything Jurgen Klopp said prior to this victory suggested there would be no complacency; no thinking ahead to this weekend’s epic; no thinking of tomorrow when today could come along and kick you on the backside.

Everything around this fixture screamed the opposite.

Jones bemoaned Liverpool’s complacency and for making the night harder than it needed to be, blaming the Reds lax attitude and wasteful finishing for it

To say Liverpool were far from their best would be an understatement. They played much of the first half in second gear, as if convinced of their own superiority.

They missed chances to build on Wijnaldum’s 14th-minute opener, allowing their less-vaunted visitors a way back into what should have been a dead contest.

The Mirror’s David Maddock labelled Liverpool’s performance “subdued” and said that the Reds were simply unable to focus fully on Genk due to the importance of Sunday’s match:

Liverpool had scored four goals in their last two European games, but there was never a hint there would be a third goal festival, the home side so subdued it seemed they had been given a pet tranquilliser to guard against loud explosions.

There were few of those inside Anfield. Perhaps it is hard to focus on such lowly opposition when perhaps the most pivotal game of the season looms so large in the windscreen ahead.

And Bascombe later explained how Liverpool’s feeling of superiority proved counter-productive as the Reds relaxed too much, making for a sloppy performance:

The sense victory was inevitable can often be impressive. In this case it created unease and almost cost the European champions.

However, the Guardian’s Andy Hunter was one who felt the night went as smoothly as it could have for Liverpool, collecting three points without any injuries:

Mundane was just fine for Klopp. Winning with a much changed team, with key players rested and without any injuries before Manchester City’s hugely significant visit in the Premier League on Sunday, was, as he put it, job done.

ESPN’s James Capps thought it was reassuring that Liverpool won without the traditional front three in operation:

With a Premier League showdown against Manchester City just five days away, Liverpool were able to get the win without having to rely on the likes of Sadio Mane and Roberto Firmino, who both started the game on the bench, meaning both should be fresh ahead of Sunday’s clash.

Meanwhile, Lynch challenged the Reds to get qualification wrapped up against Napoli at Anfield next time out as this would help relieve some pressure on the fixture congestion:

Klopp’s men now have the chance to take themselves out of the qualification equation by beating Carlo Ancelotti’s team at Anfield later this month.

That result would also take the pressure off a December trip to Salzburg – the ideal scenario given the fixture logjam that awaits in that period.

Mullock noted the Reds’ struggles defending set-pieces, and thinks this will be something that Man City will try to exploit:

Guardiola has been using the services of set-piece specialist Nicolas Jover – and City have already scored goals from six corners and free-kicks this season.

That’s already half as many as they scored in the whole of their title-winning campaign.

The BBC’s Shamoon Hafez thinks City will believe they can score at Anfield due to the Reds’ inability to keep clean sheets:

Despite the victory, Liverpool’s biggest concern will be a lack of clean sheets – now just one in their past nine games in all competitions – given that their defence provided such a solid base last season as they agonisingly missed out on the title to City, but became champions of Europe for the sixth time.

Discussing Klopp’s selection for that game, Jones pondered whether Oxlade-Chamberlain could start, highlighting how the midfielder’s previous moments against them could come into Klopp’s thinking:

Will it be enough to play him into contention for a start against Manchester City on Sunday,

Oxlade-Chamberlain has hurt City before, of course. His long-range strikes in 2018 provided memorable moments in the Premier League and in Europe, and he has hinted in recent weeks that the good times are not far away at all after his serious knee injury.