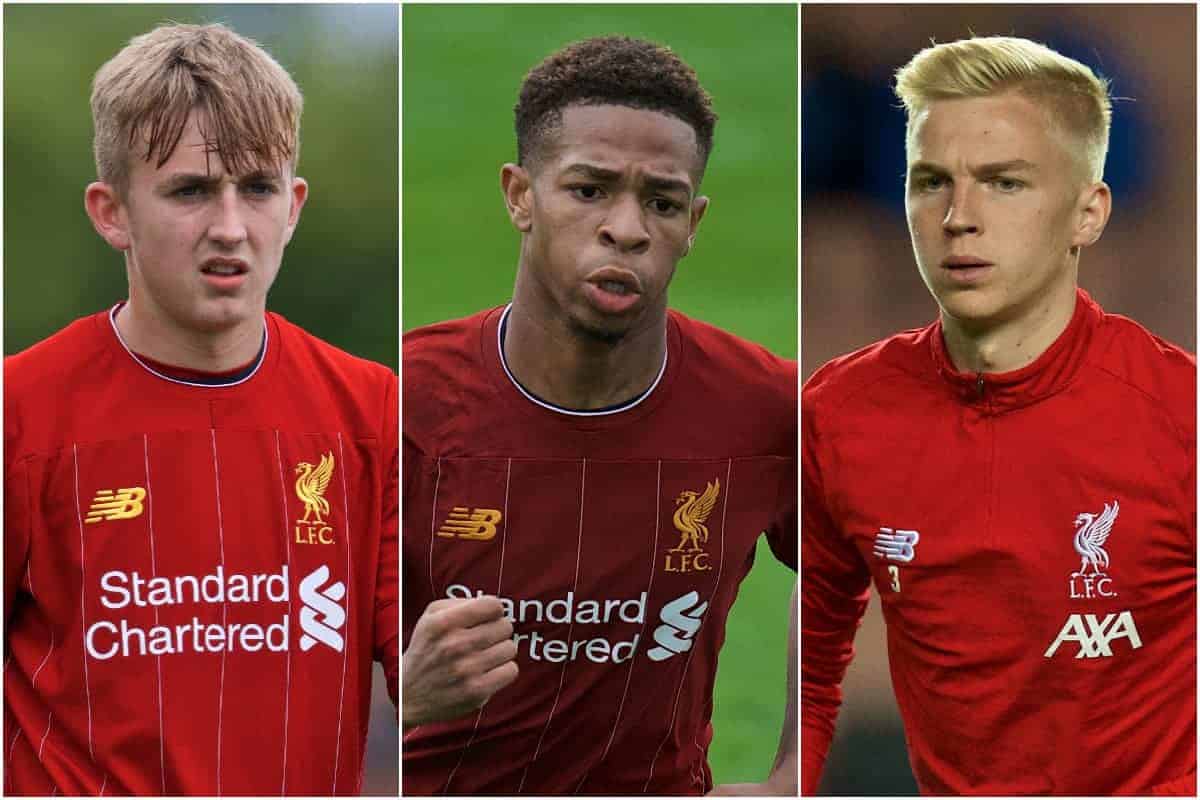 A group of promising youngsters joined Liverpool training on Tuesday, as Jurgen Klopp is without most of his internationals until later this week.

The likes of Gini Wijnaldum, Divock Origi and Rhian Brewster were still in action for their national teams on Tuesday evening, while Alisson, Fabinho and Roberto Firmino are travelling back from Abu Dhabi after Brazil’s friendly win over South Korea.

They, along with Trent Alexander-Arnold, Alex Oxlade-Chamberlain, Naby Keita and Sadio Mane, are due back in the coming days, which saw Klopp call upon a new-look selection in midweek.

Jakub Ojrzynski (16) worked as part of the goalkeeper group, with the Pole put through his paces alongside Adrian and Andy Lonergan.

Leighton Clarkson (18), Yasser Larouci (18) and Luis Longstaff (18) were involved again, having been part of the first-team squads in the League Cup so far.

Under-23s full-back Tony Gallacher (20) made a rare appearance, as did in-form midfielders Jake Cain (18) and Elijah Dixon-Bonner (18), with the latter celebrating a new contract.

Curtis Jones and Harvey Elliott joined their fellow youngsters after missing England duty, with the summer signing forced out of the under-17s squad due to a minor injury.

Of the Reds’ senior staples, Henderson was involved after illness, along with James Milner, Adam Lallana, Dejan Lovren and the returning Xherdan Shaqiri.

In wintry conditions at Melwood, the squad were tasked with a rigorous warmup, before splitting off into groups for rondos, with Vitor Matos a vocal presence as he oversaw his academy hopefuls.

Fitness coach Conall Murtagh joined the group in small-sided exercises, with Chirivella receiving lengthy instruction from Klopp as part of a finishing drill.

While the squad should revert to normal ahead of Saturday’s trip to Crystal Palace, many of these youngsters could be involved against Aston Villa in the League Cup quarter-finals next month.

This session could have allowed the likes of Cain, Dixon-Bonner and Longstaff to catch Klopp’s eye as he plans to split an extended squad over two continents, with the manager heading to the Club World Cup in Qatar at the same time.