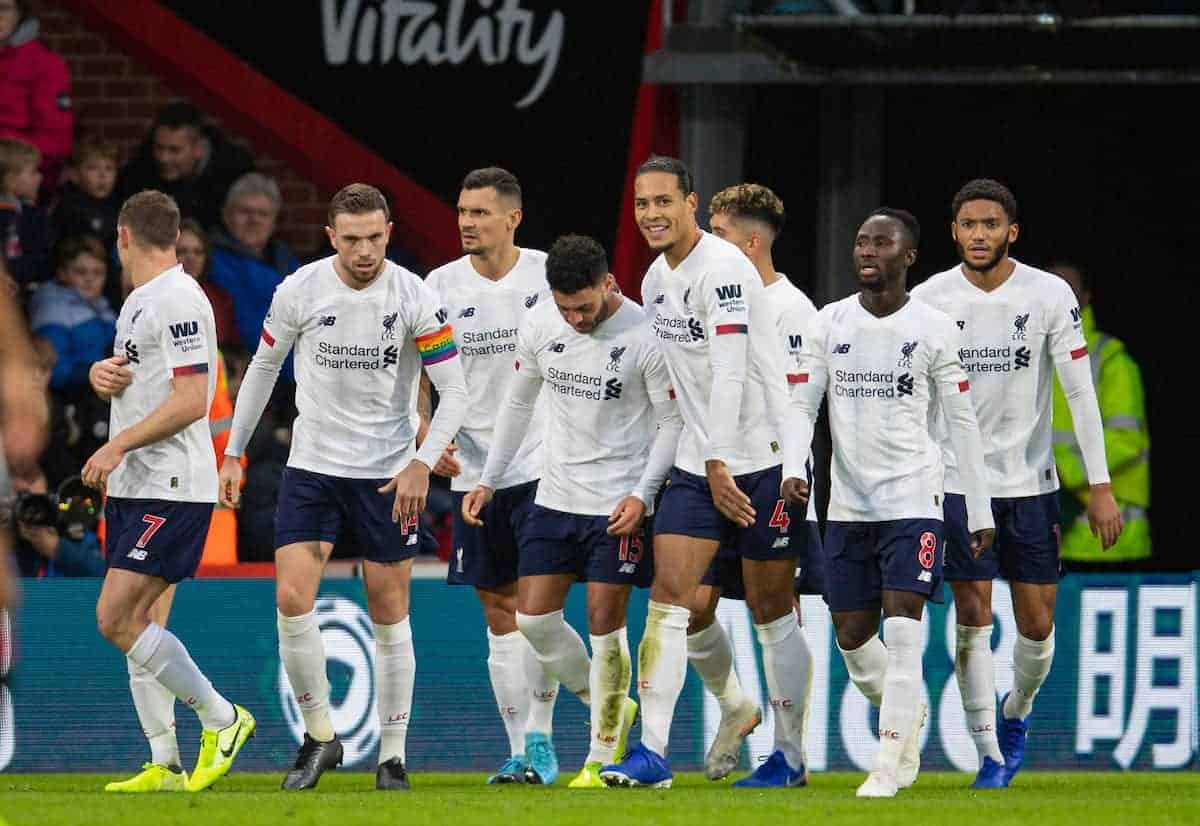 Liverpool extended the lead at the top of the Premier League to 11 points with a comfortable 3-0 win at Bournemouth, where several Reds were in excellent form.

The No. 1 was reinstated between the sticks after his one-game ban, and it was a comfortable return for the Brazilian.

Had precious little to do, but when called into action did everything with minimum of fuss, showing solid handling on a couple of occasions.

Hard to give him anything higher as he had such little involvement in the game!

A game of two positions for Gomez.

Has struggled when filling in at right-back this season and did so again, with limited attacking output while also looking shaky defensively and generally uncomfortable.

Improved once he moved inside to his natural centre-back role, with some good covering and recovery speed to long balls launched in behind.

The Croatian has been in good form since coming for Joel Matip, but he had a mixed time of things on the south coast.

Dominated the physical battles but was nervy under pressure with some sloppy play in possession, and unconvincing in his one-vs-one defending. Doesn’t seem so assured when Gomez is outside him.

Played only the first 40 minutes before being forced off with an injury, which hopefully is not anything serious given the busy schedule.

Not the most challenging day Liverpool’s No. 4 will have this season, as Bournemouth offered next to no attacking threat.

Van Dijk still didn’t put a foot wrong through, and was effortless in his work throughout as he controlled things from the back.

Made a potentially goal-saving slide tackle at 0-0 to deny Dominic Solanke as he closed in.

Another Red who had one of the easiest afternoons he will have all season, but was solid with what he had to do.

Defended aggressively to ensure his winger hardly had a kick and Liverpool’s left flank would not be undone.

Was typically determined to join in going forward but his distribution wasn’t quite as the usual impeccable levels—though this is more of an observation than a criticism.

Restored to the No. 6 role after his midweek rest and the captain enjoyed an excellent afternoon.

Henderson’s use of the ball was impressive throughout with some eye-catching forward passes—one of which was a sensational diagonal ball for Alex Oxlade-Chamberlain’s opener.

Full of energy as usual and dominated the space in front of the back four really well, providing good defensive protection—albeit against a non-existent Cherries attack.

The vice-captain produced a solid-if-unspectacular display, but one that shouldn’t be understated as he did the dirty work, competing well physically and keeping things simple.

A fantastic piece of defensive covering to stop Callum Wilson breaking into the box summed up his battling, selfless performance.

Moved to left-back late on, allowing Robertson a rest, and did the job with no fuss. 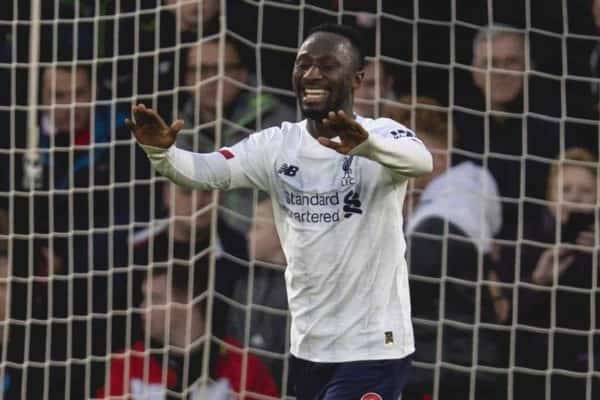 It was a big day for Keita, making his first Premier League start since April and with pressure on to deliver.

The Guinean rose to the occasion producing a man-of-the-match performance, including the all-important second goal which saw him involved in the slick move before finishing it off.

Liverpool’s chief playmaker, Keita was great on the ball throughout with some incisive passes—one of course which supplied Mohamed Salah to make it 3-0.

Some great counter-pressing and gliding runs through midfield to top it all off, and he looks ready to launch his Anfield career after a frustrating time of things.

Impressed in midfield on his last start against Brighton but was moved back to his less comfortable position on the left of the front three here.

Had limited influence in open play from that role but popped up with the crucial opener with a controlled, volleyed finish on the stretch which was a brilliant piece of play.

Subbed late on with the game done and dusted. 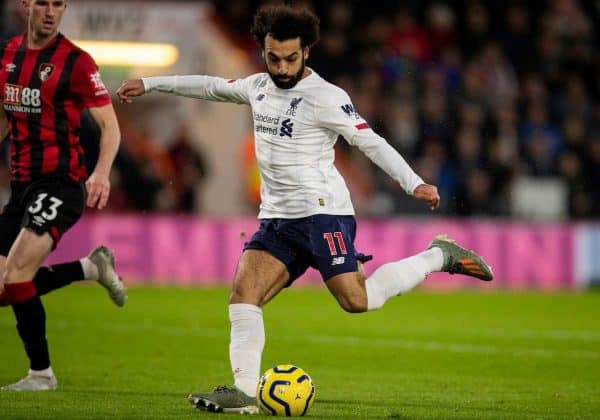 After a quiet spell, Salah was back to his best on the south coast.

Looked lively from the off with some good movement in behind Bournemouth’s defence, and soon produced a sublime assist for Keita’s goal with an exquisite back-heel.

Scored the vital third goal to put the game beyond doubt with a trademark Salah goal—racing onto the through pass and finishing beautifully—and looked a revitalised player thereafter.

Loves playing Bournemouth, with seven goals in five appearances against the Cherries.

Liverpool’s No. 9 was restored to his usual central role but it was another day where it didn’t quite happen for him.

The Brazilian was surprisingly ineffective in open play, with his usually immaculate first touch deserting him in a couple of key moments.

Also wasted some good chances with some wayward finishing which he would usually gobble up, summing up his current struggles. 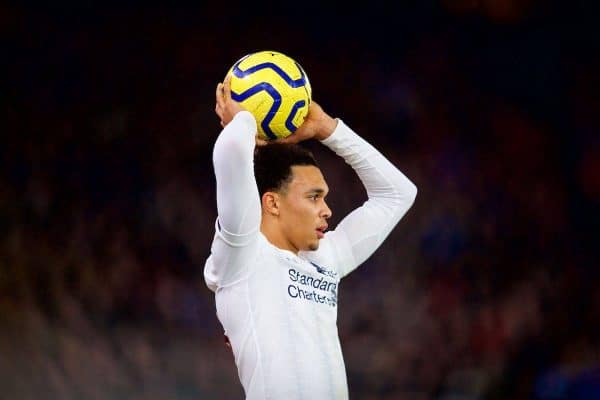 Didn’t get the rest intended having had to come on after just 40 minutes for the injured Lovren.

Instantly showed his attacking threat creating a good chance for Firmino and was involved shortly after in the superb move for Keita’s goal.

Was very noticeable once again how much Liverpool’s attacking threat and creativity improves with Trent in the team.

Replaced Robertson for his Premier League debut, slotting into midfield with Milner moving to left-back.

Nearly marked the occasion with a wonder goal, but steered his left-foot volley over. Some tidy touches and lots of intelligence. A big prospect for the future.

Xherdan Shaqiri (on for Oxlade-Chamberlain, 86′) – N/A

Sent on for the closing minutes and teed up Jones for his volley with one nice bit of play.

Showed faith in his squad once again, making seven changes, and the rotation worked a treat as the fresh Reds delivered a hungry performance which was simply too strong for Bournemouth.

Salah particularly looked a lot sharper while Keita shone, and it was great to see Jones come on for a late runout, and Robertson given a deserved rest.

Klopp is certainly doing a great job in managing the squad as the hectic schedule begins and the Reds increasingly look like being able to cope with it.

What a winning machine the German has created.