Jurgen Klopp is hopeful that the injury which forced Dejan Lovren off in the win over Salzburg is nothing serious.

For the second game in succession Liverpool’s No.6 was forced from the field through injury, with his withdrawal in the second half against Salzburg following on from his early substitution against Bournemouth.

In the immediate aftermath of the win over the Cherries, Klopp had revealed that Lovren had suffered from cramp and they opted for caution as he was replaced on the 40 minute mark.

He would prove his fitness and again be named in the starting XI in Austria before clutching at his hamstring and again seeing his game brought to a premature end with 53 minutes gone.

After the game, Klopp told reporters that he was hopeful that it was a similar issue to that seen over the weekend.

“We hope that it’s exactly the same as last time. He felt something and we made the decision. It’s of course not cool,” he said. 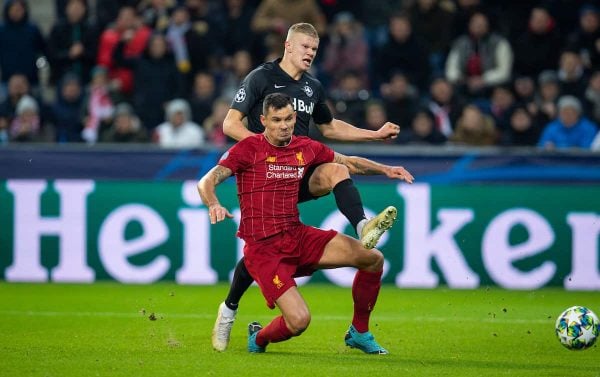 “He played really well and was very important. We don’t know more in the moment. It felt similar like last time, that’s it. We have to see.”

However, when walking through the mixed zone after the game Lovren, James Pearce noted that the centre-back was “clearly in discomfort” and the player himself revealed he has “got a hamstring problem.”

Liverpool will, of course, have to wait to see how he recovers over the coming days but another injury at the heart of the defence could not have come at a worse time with the Reds set to play seven games in 19 games.

Joel Matip is set to be sidelined until new year, meaning Joe Gomez would be the man to take his place alongside Virgil van Dijk for the foreseeable future.

With Fabinho similarly sidelined, Klopp could turn to Ki-Jana Hoever for further cover in the position, while Gini Wijnaldum is another potential option if required.