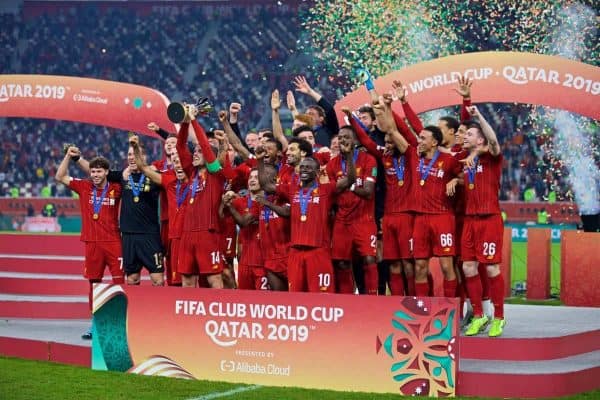 The media felt Liverpool’s 1-0 win over Flamengo proved the Reds are the best in world football and was a victory for Jurgen Klopp’s approach.

After conquering Europe, the Reds conquered the world for the first time in club history thanks to Roberto Firmino’s extra-time winner.

It caps off an incredible 2019 for Klopp and his remarkable team, who have seen the rewards of their work arrive with three more trophies added to Anfield’s cabinets in just six months.

Here is all the key analysis from the media on a historic victory which confirmed Liverpool’s status as the best club team on planet earth. Enjoy!

Standard Sport’s David Lynch took plenty of pleasure in stating how there can be no doubt that Liverpool are now legitimately the best team in the world:

That is because, after beating Flamengo to clinch the Club World Cup on Saturday evening, Liverpool have a legitimate claim to being the world’s best team in this moment.

Comfortably clear in the Premier League title race and on track to defend their European crown, Jurgen Klopp’s men have reached new heights this season.

The Liverpool Echo’s Ian Doyle reflected on an incredible six months in which the Reds have made history with a unique treble:

European Cup in June, UEFA Super Cup in August and now Club World Cup in December, what a six months this has been for Klopp and his players, becoming the first English team to complete the international treble.

The Mirror’s John Cross pointed out how the Reds are a team “in the groove of winning trophies”, also insisting that “no-one can dispute they are the best”:

This means everything to Jurgen Klopp and his players, a team now in the groove of winning trophies as they finish 2019 with another piece of silverware after lifting the Champions League and European Super Cup in August.

But the difference for Liverpool now is they have won the final missing piece of the jigsaw, now no-one can dispute they are the best.

ESPN’s Nick Judd lauded Liverpool’s mental toughness and assessed that as the key to why the Reds got over the line:

This was a war of attrition which required great mental resilience.

Doyle thought the Reds’ superior fitness made the telling difference as Flamengo ran out of steam in extra-time:

The Reds fully merited their victory, possessing too much class and, ultimately, greater fitness than the Flamengo.

The Telegraph’s Chris Bascombe thought that the glory of becoming the first Liverpool team ever to win the trophy gave Klopp’s men an extra psychological boost to push through:

But there is no doubt he [Klopp] and his players feel the status of this competition more than imagined when that first invite landed at Melwood.

The Mirror’s Matt Maltby was pleased to see Liverpool overcome Flamengo’s “naughty tactics”, impressed with how the Reds retained composure to play their own game:

And, while Liverpool’s squad undoubtedly boasts plenty of experience, Flamengo’s stars also used all their years in European football to their advantage.

First Rafinha got Mane booked, despite initially fouling the Reds star, and he then delayed the second-half on numerous occasions when Klopp’s men began to pile the pressure on. Then Filipe Luis followed suit, going down under what appeared to be a weak challenge. And, after receiving medical treatment, he made a miraculous recovery to return to the action.

Meanwhile, Melissa Reddy, for the Independent, was among the many journalists to applaud Liverpool for overcoming Abdulrahman Al Jassim’s shambolic refereeing performance:

It wasn’t pretty or poetry – and the win featured one of the most appalling refereeing performances seen in a showpiece final by Qatar’s Abdulrahman Al Jassim – but not even he could deny what Liverpool believed was their destiny.

Adding to that, the Liverpool Echo’s Paul Gorst assessed that Al Jassim was completely out of his depth, which brings concern over the standard of officiating ahead of the 2022 World Cup:

It was a big game that needed a big official. Abdulrahman Al Jassim – the man in possession of the whistle – was not that man.

Al Jassim’s woeful display was infuriating and stifling to the Liverpool cause, though, and if the standard of refereeing is of this ilk in 2022, football supporters the planet over are in for a strange World Cup.

Cross attributed Liverpool’s latest success to the winning mentality that Klopp has instilled into his team:

But the sight of Klopp screaming at his players, filling them with determination and instructions with his team talk at the end of a gruelling match before half time gave them extra energy.

That was the key as Klopp’s energy and winning habit has breathed new life into Liverpool and they go from strength to strength.

The BBC’s Harry Poole correctly noted how glory in Qatar more than vindicated Klopp’s decision to prioritise this competition over the League Cup:

That 99th-minute winner vindicated Klopp’s decision to pursue a first Club World Cup triumph over progress in the Carabao Cup, while delivering an entertaining final sure to have grabbed attention at home.

The Mail’s Ian Herbert lauded Klopp’s work in inspiring his players to take the competition seriously and write themselves into Anfield history:

But it was a different kind of Liverpool this time; a team led by a manager whose imagination for what this trophy might represent has transmitted such a powerful image of the team this past week, to the world audience more captivated by this trophy than British fans.

To hear Klopp speak on Friday of the Apollo II mission – ‘something that has never been done before, like landing on the moon’ – was to appreciate what he brings.

Lynch explained how this latest trophy win is another example of Klopp’s initial vision when he took the job bearing fruit:

When Klopp took the reins at Anfield in October 2015, it was difficult to see what had attracted him to a fallen giant that had shown so few signs of recovery in the years prior.

But, as we have since discovered, the German’s biggest strength is vision, and that has proven vital to turning a drifting club into world champions.

ESPN’s Mark Ogden praised the way Klopp has used last season’s agonising runners-up finish in the Premier League as a springboard to turn his team into “serial winners”:

Last year’s near-miss in the Premier League, after banking 97 points as runners-up, has been used as a springboard for an assault on this year’s title rather than a setback in which to wallow with self-pity.

Winning the Champions League, UEFA Super Cup and Club World Cup has turned Liverpool into serial winners, and this success in Doha is unlikely to be their last this season.

Lynch also believes Klopp is on the way to becoming a figure as revered and important in the club’s history as Bill Shankly, such has been his work in rebuilding the Reds:

Should things carry on like this, then suggestions that Bill Shankly has a modern equivalent might not sound so ridiculous.

Of course, the push to create that sort of legacy starts now.

Herbert thinks success in this competition will “fuel” Liverpool’s drive for domestic supremacy:

But ‘champions of the world’ is an achievement which will more than do for now. It is an outcome you have to feel will fuel their drive for domestic supremacy.

Cross says the Reds’ desire for constant silverware could bring another golden era to L4 and cement Klopp’s side as one of the best in Anfield history:

They want to win trophy after trophy to push the club into a new golden era to make Klopp’s reign as glorious as the best teams of the late 1970s and 80s.

Finally, Doyle thinks the confidence boost that the Reds will take from earning a third trophy in six months will re-energise the push for Premier League glory:

And far from being a distraction, the near 7,000-mile round trip to Doha has served to bolster confidence, even if legs were tired by the extra period.