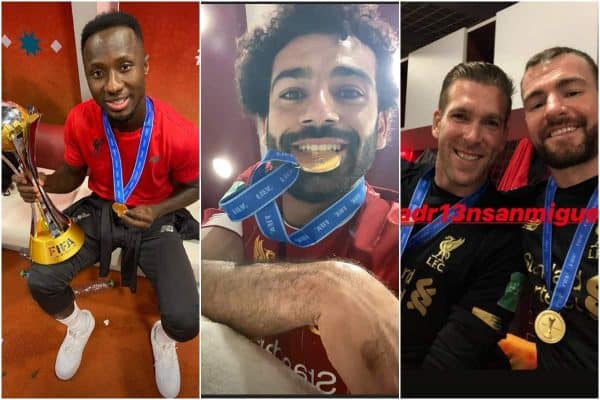 The Reds were in fine form as they celebrated their Club World Cup triumph on Saturday evening, with their dressing room celebrations another show of their team comradery.

Jurgen Klopp‘s men secured their third trophy of the German’s reign with a narrow 1-0 win over Flamengo in the Club World Cup final.

Across the English media, there was a clear view that the Reds ought to have stayed closer to home to progress into the last four of the League Cup instead of battling it out for world supremacy as a reward for their European triumph in June.

But the celebrations after the match from players and fans alike clearly indicated how highly regarded another piece of silverware, and this one in particular, was held within the Liverpool camp.

“The atmosphere in the dressing room just shows you how positive this competition can be. It’s another trophy and that’s what we’re here for,” Joe Gomez said after the victory.

And the atmosphere was certainly one which saw the players and all the backroom staff celebrate their achievement as one, with songs and serenades the name of the game.

We all know Pepijn Lijnders is as excitable anyone and along with Andreas Kornmayer, the duo raced into the dressing room to a chorus of ‘Oh Campione’, with Adrian there to film all the action:

You all are here with us, lads!
C'mon @LFC! pic.twitter.com/nf86iGh8ob

An alternate view shows Mohamed Salah having the awareness to first clear the table of any spillable liquid prior to joining in on the raucous celebrations. How can anyone not love this man?

Mo Salah gently removing the cups from the table so that they don’t spill when it gets a bit raucous is why I would die for the man pic.twitter.com/fEVzDfCnWG

The man of the moment in Roberto Firmino then found himself serenaded by his teammates as a rendition of ‘Si Senor’ bellowed out. A usually shy individual, but his smile says it all:

And arguably one of the best videos to emerge after the game comes from Andy Lonergan, who has two titles to his name without having yet made an appearance, with the squad coming together for a bit of ‘Allez Allez Allez’.

There was a bit of confusion it seems over whether we’ve conquered all of Europe or all of the world – but we’ve done both lads so either will do:

If, like many, you had your coverage cut out after the initial trophy lift from Henderson, then you’ll certainly appreciate this view of Klopp showing off the trophy to the fans.

And this time his famous fist pumps were back in action:

? It's the Klopp fist pump celebration with a trophy ?? pic.twitter.com/syo7WB7KG6

The scenes of celebrations with a piece of silverware in tow has become a common sight in 2019, with this the third moment of triumph for the Reds in less than seven months.

And here’s hoping there is a lot more to come after the turn of the new year!