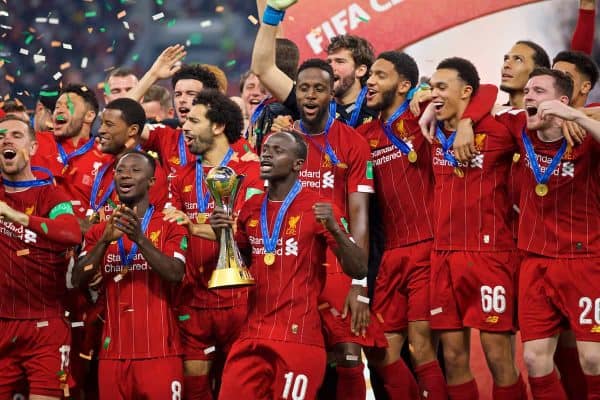 The 1-0 extra-time victory over Flamengo in Doha saw the Reds win the one trophy available to them which they had not previously won.

They return home actually in a stronger position than they left, with Manchester City’s victory over Leicester meaning their lead at the top of the Premier League is still 10 points – but now with a match in hand.

And with a third trophy in six months in the bag, Gomez says they are now looking to consolidate their bid for a first league title since 1990.

“Winning this only adds to our positivity,” he said. “We come away from here as champions of the world. Why can’t we use that as a positive?

“But we know we can’t dwell on anything. We’re not even halfway through the season yet, so it’s a case of heads down and carry on the focus.”

For all the criticism the club received for travelling to Qatar with a full-strength squad, leaving behind a youth team to get knocked out of the Carabao Cup quarter-finals, the players were in no doubt it was the right decision.

Many have spoken of the drive which exists to win more trophies, so adding another piece of silverware more than justifies the trip.

“It’s special. We knew coming into it that we hadn’t won it as a club before and that was something we wanted to achieve,” Gomez added.

“Credit to all the players, staff and the supporters. I’m buzzing that we were able to take this opportunity. You don’t get here without winning one of the biggest trophies in the world.

“The consequence of that is you come here and play top teams. We played two good teams this week and you can’t under-estimate that.

“The atmosphere in the dressing room just shows you how positive this competition can be. It’s another trophy and that’s what we’re here for.”

The victory was not without controversy as Liverpool thought they had won an added-time penalty for a foul on Sadio Mane only for it to be ruled out by VAR when Qatari referee Abdulrahman Al-Jassim viewed his pitchside monitor.

But Jurgen Klopp’s side bounced back and Roberto Firmino scored the crucial goal in the first half of extra-time.

“I think that shows the mentality of the team,” said Gomez. “When we weren’t awarded a penalty or a free-kick from that incident our heads could have dropped.

“We could have felt sorry for ourselves and momentum could have gone against us. But credit to the boys for staying focused and keeping the standards high.”