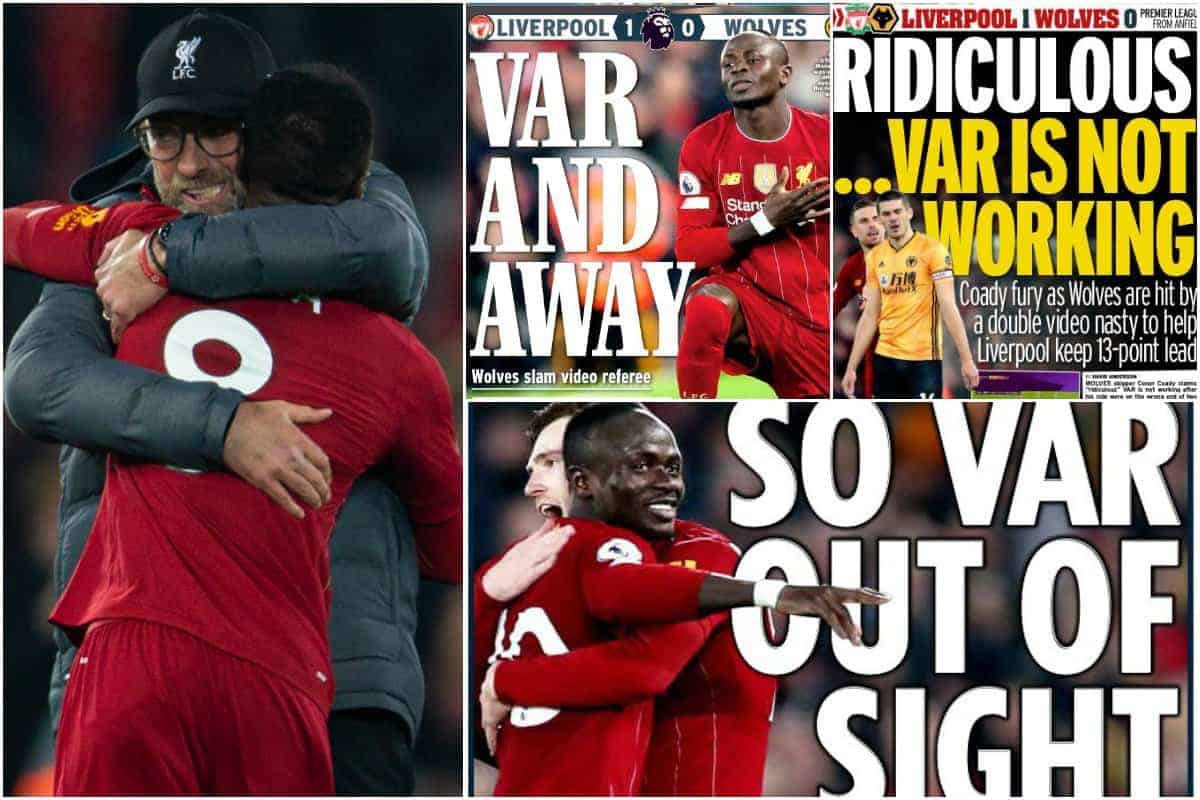 The media praised Liverpool’s resilience and defensive performance in the 1-0 win over Wolves, but were less complimentary about VAR.

The Reds signed off what has been an incredible 2019 with a hard-fought victory at Anfield and 13-point lead at the top of the Premier League.

Sadio Mane struck the all-important winner with a clinical finish, becoming the first Red to reach double figures in the league this season.

It was an extremely tough game against a good Wolves side, and Klopp will be delighted with the spirit his players showed to drag themselves over the line.

Here is all the key analysis from the media on the final victory of the year.

ESPN’s Liam Wheeler wrote how the Reds “added another string to their bow” by digging out the three points thanks to a “stubborn defensive display”:

“The Reds were made to work hard for victory and showed another string to their bow—and an abundance of character—with a stubborn defensive display to keep Wolves at bay.”

The Liverpool Echo’s Ian Doyle was impressed by how Klopp’s side retained composure under the late pressure to see the game out late on:

“Liverpool deserve credit for maintaining their composure amid the maelstrom, as they have done on several occasions already this season.”

Melissa Reddy, of the Independent, reflected on how it was vital that Liverpool ensured the stunning win at Leicester was backed up with victory by any means necessary at Anfield:

“The festive schedule is usually a period to endure rather than enjoy, and with both teams already navigating intense tests this week, an untidy affair was predictable.

“Liverpool showcased their mastery and magic in a 4-0 away dismantling of Leicester City on Thursday, with the directive to pick up maximum points on Sunday evening by whatever means necessary.”

Writing for the National, Richard Jolly noted how it is Liverpool’s ability to edge the tight games that will prove the decisive factor should the Premier League title arrive at Anfield in May:

“Their assurance as they saw the game out was evidence of how they have improved.

“This was their 12th victory this season by a one-goal margin and, along with a 100 percent record at Anfield, their ability to prevail in close games is a fundamental reason why they should become champions.”

“City’s failure to claim a single point from their two meetings with Wolves this season owed much to an inability to control their opponents’ main threat.

“Unlike the reigning champions days before, Liverpool dealt with those fast breaks for the majority of this contest, showing a real desire to box the ball carrier in, or matching their lung-busting runs in behind.” 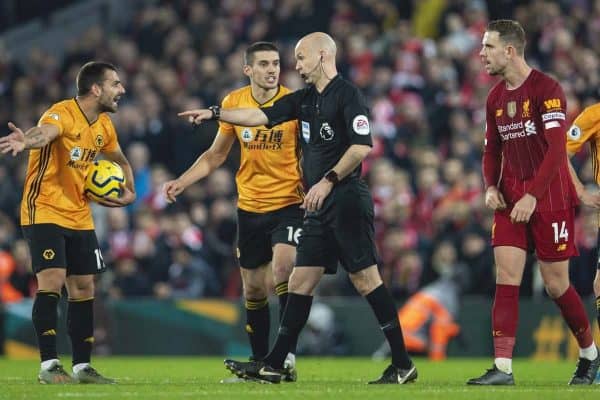 The Mirror’s Alex Smith discussed the hilarious conspiracy theories among rival fans of VAR helping Liverpool, and said that the Reds are so good they would still win the title without it:

“Actually it is complete rubbish, but the two VAR decisions at the end of the first half made it look suspiciously like the Reds were getting a helping hand.

“Conspiracy or not, Liverpool will win the Premier League this season and likely would with or without the powers that be’s help.”

Doyle rightly reminded those ‘LiVARpool’ theorists that the Reds have had their fair share of tight calls go against them this season too:

“The term “LiVARpool” began trending on social media, underlining the thoughts of many rival fans that the Reds are benefiting more than anyone.

“This rather conveniently forgets Roberto Firmino‘s armpit at Villa Park and the collective myopic episode that saw all officials miss Victor Lindelof’s foul on Divock Origi at Old Trafford.”

The Mail’s Ian Ladyman was forthright in his assessments that VAR did its job perfectly, stating that both decisions were correctly overturned before noting how the rules, not VAR, are the problem:

“The bold facts are that Anthony Taylor and his officials got two difficult and important decisions wrong towards the end of the first half. So a disallowed goal from Liverpool’s Sadio Mane was allowed to stand and what was given as an immediate Wolves equaliser from Pedro Neto was then disallowed for offside.

“VAR is not to blame here. The rules are to blame and there is a difference.”

“Jonny may well have been marginally offside, although we know there is no certainty with VAR technology, but the bigger question is whether VAR truly upholds the spirit of the game.

“Should goals like this one, which only six months ago would have been widely agreed to be fair, now be chalked off?”

The Liverpool Echo’s Paul Gorst bemoaned how VAR drains emotion from the stands:

“Wherever you stand on the use of video technology in Premier League football, there can be no denying it has eroded the pleasure found in the instant joy of scoring a goal.

“Both players and fans now meet legitimate goals with relief over elation. That simply cannot be right, whoever you support.”

“The young full-back produced a knockout performance on Boxing Day and he reinforced his status as the best right-back in the league with another fine attacking display here.

“That included plenty of well-placed deliveries, one of which was somehow scooped over by Mohamed Salah.”

“There is an argument that Joe Gomez is England’s best centre back. He got Virgil van Dijk, ie the second best player in the world, and Trent Alexander-Arnold out of trouble on a couple of occasions and generally look super assured.

“Dejan Lovren and Joel Matip are heading back to full fitness, but it looks increasingly difficult for either to dislodge him.”

Ostlere thought Jordan Henderson was key, noting how the captain’s control ensured the Reds played a patient game on a day a disciplined performance was needed:

“He quietly directed proceedings, rarely looking flustered and constantly providing an option for his team-mates as Liverpool played a more patient game than their normal fast and furious approach.

“He made a key late block and it was indicative of a disciplined performance, even if it will win few plaudits.”

The same reporter thought Adam Lallana’s shoulder assist was a work of art and stated how such a decisive performance from the midfielder gives Klopp another in-form option at a crucial period:

“His shouldered pass into the path of Sadio Mane became the subject of VAR debate, denying it the proper praise it should have received. The movement was very deliberate and the measured control was perfect for Mane to finish what would ultimately be the game’s decisive goal.

“At a time when Liverpool are storming towards the title, fighting to defend their Champions League crown and with Euro 2020 on the horizon, there could not be a better moment for Lallana to resurface.”

With the final game of the decade done, BBC Sport’s Emma Sanders reflected on Liverpool’s remarkable journey from relegation battle to world champions:

“It seems like it was only yesterday when Liverpool appointed Roy Hodgson as manager in 2010. Hodgson would go on to last just six months, having made eight signings—Milan Jovanovic, Joe Cole and Paul Konchesky among them—who all failed to impress at Liverpool.

“Fast forward 10 years and Liverpool are sporting the FIFA Champions badge on their shirts for one game in the Premier League after winning the Club World Cup in Qatar earlier this month.”

Jolly assessed 2019 as “one of the greatest years” in Liverpool’s history and wrote in disbelief at the Reds’ losing just once in the Premier League in the entire calendar year:

“Liverpool can bid a fond farewell to 2019. One of the greatest years even in their glorious history ended in familiar fashion, with yet another victory.

“It has been a truly astonishing year, one in which Liverpool have not lost a league game since its third day.”