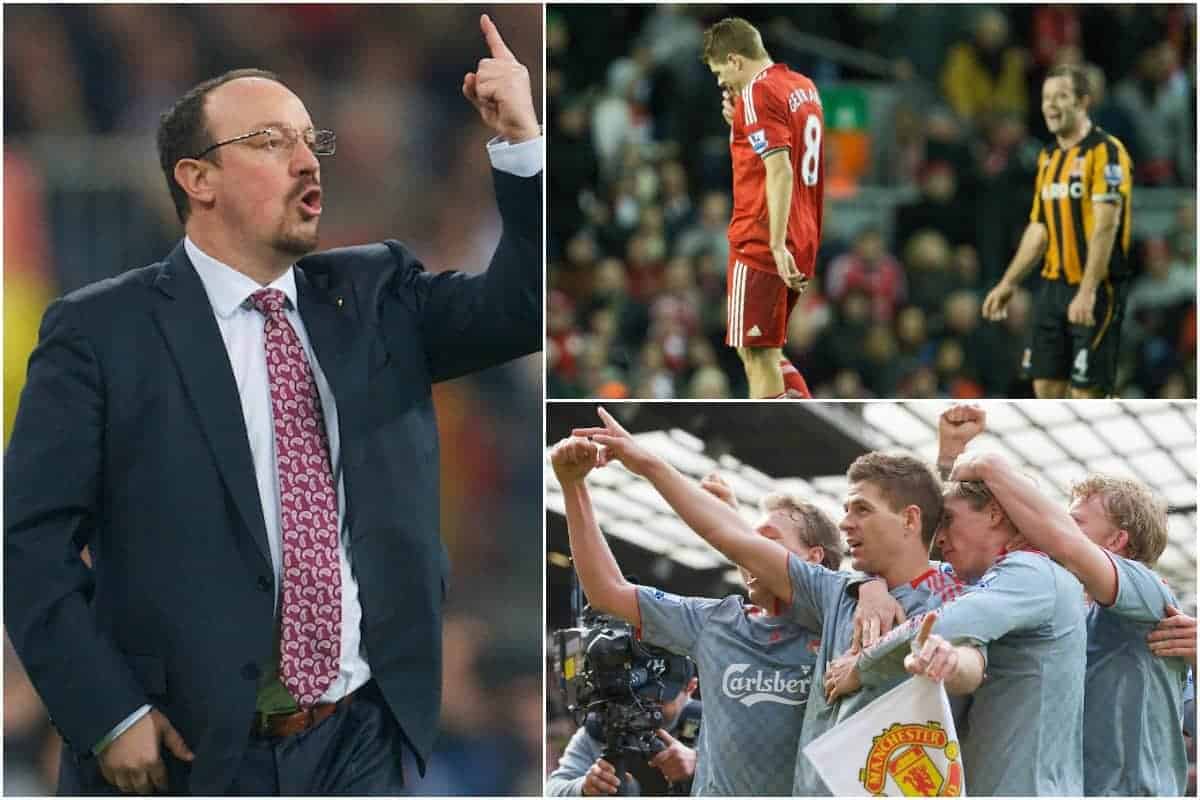 Liverpool had flirted with the end of their barren run without a league title, but Rafa Benitez’s 2008/09 side would face an all too familiar agony come seasons end.

It is the summer of 2008 and Liverpool’s owners Tom Hicks and George Gillett remain at odds with one another and seemingly all associated with the club, while Benitez’s battle in the board room sets off a chain reaction with both instantaneous and future repercussions.

The Spaniard is in his fifth season at the helm and oversees sweeping changes to his squad, with long-serving stewards in John Arne Riise, Harry Kewell and Steven Finnan all saying their farewells.

They were joined by the likes of Anthony Le Tallec, Peter Crouch and Scott Carson, with the former finally moved on after seven uninspiring years at the club.

But it was the transfer which never came to fruition which proved a key talking point at that time and even to this day, one which lingered into the following summer and ultimately resulted in Xabi Alonso leaving Anfield for Real Madrid.

It all started, of course, with Benitez identifying Barry, who was then plying his trade at Aston Villa, as his No. 1 target. A £20 million price tag saw Alonso placed on the bidding table, only for the club’s hierarchy to intervene and refuse to seal the deal.

Chief executive Rick Parry was key in the decision making, with the funds going to sign Robbie Keane from Tottenham instead, a move which left Benitez at greater odds with those in the upper echelons of the club.

Defenders Philipp Degen and Andrea Dossena and David N’Gog would also join in the summer as the club’s revolving door earned its keep.

It was a less than ideal source of preparation for the season ahead, but it was one whereby the elusive prize was within reach for much of the campaign, only for a familiar sense of deja vu to rear its head. 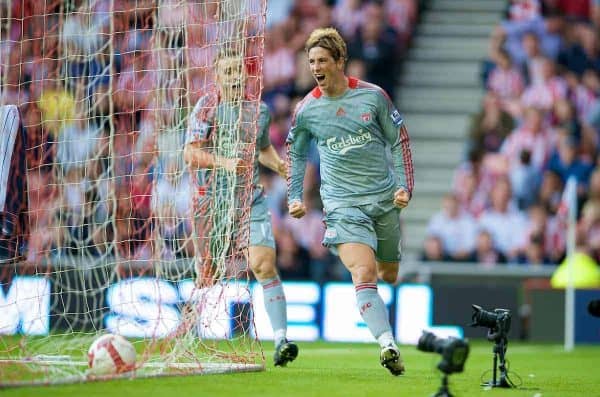 Having finished the previous season in fourth place and with a third Champions League semi-final in as many years, there was ever-rising confidence for the season ahead.

And the Reds started brightly, swiftly establishing themselves towards the top of the table after notching eight wins from their opening 10 Premier League outings, but that was not to say there was not any drama which left hearts racing.

The opening day saw victory snatched with less than 10 minutes on the clock as Fernando Torres opened his account at Sunderland, before two trusty faces in Jamie Carragher and Steven Gerrard rescued the Reds from certain defeat to Middlesbrough.

The visitors had edged themselves into the lead through Mido with just 70 minutes on the clock at Anfield, only for Carragher to score his fourth and last league goal for the Reds before the skipper launched a trademark rocket into the net.

A full complement of points to start the campaign was coupled with a European Cup qualification tie with Standard Liege, where Liverpool again left it late with Dirk Kuyt finding the net with three minutes left in extra-time to secure a place in the group stages.

After the summer’s dealings, an encounter with Aston Villa was quickly on the cards but failed to live up to the external build-up as the two teams played out a scoreless draw – an evening which saw James Milner make a brief appearance late on. 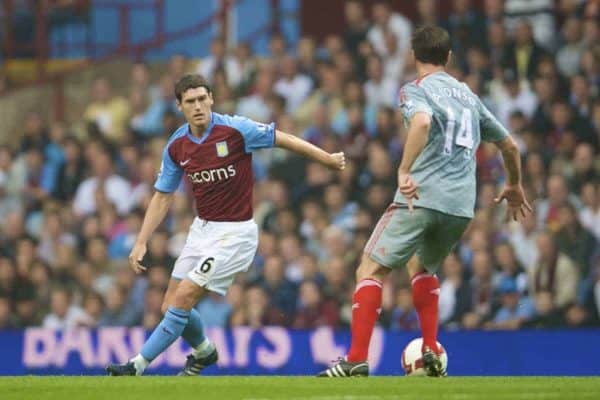 But eyes would then shift towards the matchup everyone looks to upon the release of the new fixture list, the visit of Man United.

Alex Ferguson’s side would remain in the Reds’ sight for the remainder of the season as Benitez and his side looked to deny United their third successive title.

And having fallen to defeat against United in both league meetings in 2007/08, the game got off to the worst possible start for the men in red as Carlos Teves found the net after three minutes to silence Anfield and leave the Reds on edge.

It was the worst possible start and we were visibly shaken, but the Reds, who started without Fernando Torres and Gerrard, were given a timely boost when Edwin Van der Sar parried his clearance into Wes Brown.

Liverpool quickly asserted their dominance, both players and fans were buoyed by the misfortune of the opposition, and it was only time before they landed the killer blow – one which arrived in the form of Ryan Babel in the 77th minute – with Nemanja Vidic later handed his staple red card against us.

The result, which was the first win over United under Benitez, temporarily moved the Reds into first place ahead of Chelsea, while Man United sat ninth in the table. 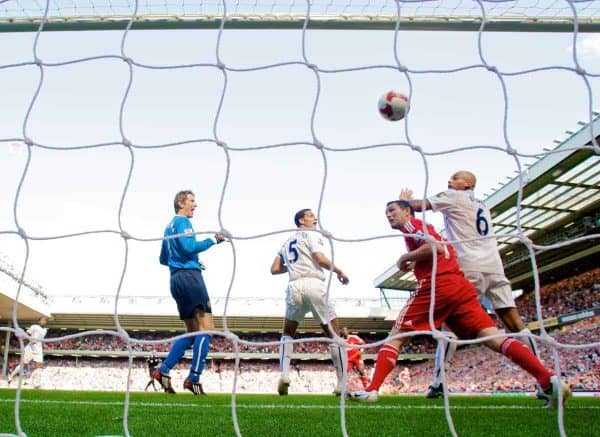 Subsequent dramatic victories over Man City, Wigan and Portsmouth would follow, while Torres put Everton to the sword at Goodison and Alonso’s strike inflicted Chelsea’s first defeat of the season.

One which memorably ended their 86 game unbeaten run at Stamford Bridge and saw the Reds sit at the summit for the first time that season.

Concurrently, United had moved into third after a turbulent start to the campaign, a time whereby Benitez’s men went on to taste defeat for the first of only two times in the Premier League at the start of November. 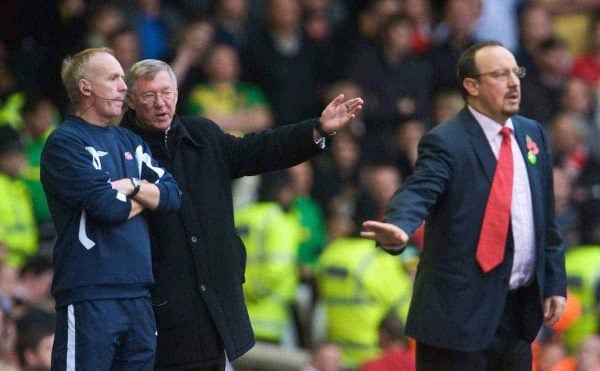 It came away at Tottenham as, despite Kuyt striking early, an own goal and a late effort at the hands of the hosts ended the night on a disappointing note, with Chelsea inflicting further pain having assumed top spot once more.

Meanwhile, Spurs would also ended the Reds’ run in the League Cup in the fourth round to seal yet another early exit from domestic cup action, while four wins from their six group games sealed a place in the Champions League last 16. 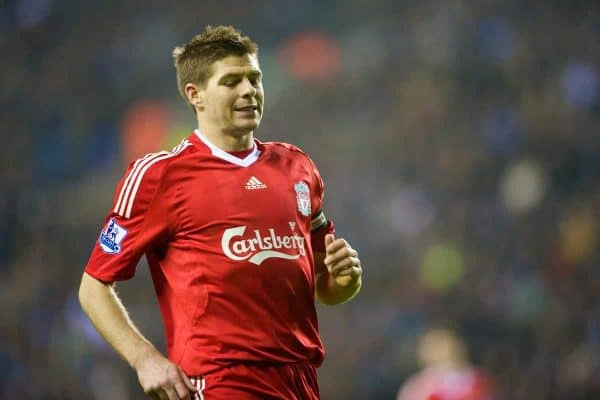 The first three months set up a solid foundation for Liverpool, with hopes firmly building around a side which possessed players at the peak of their powers.

An exciting spine of Pepe Reina, Carragher, Alonso, Javier Mascherano, Gerrard and Torres was coupled with a myriad of reliable supporting players, but it was the four months that followed which proved decisive in the destination of the title.

After the league defeat to Spurs, Liverpool went 15 games unbeaten but eight of those were draws, with the defeat at the hands of Middlesbrough bookending a season-defining run.

The latter was made all the more disappointing as Boro had collected just six points from their previous 15 matches prior to Liverpool’s visit, a run which failed to return a single victory.

Nevertheless, it was a period of time which saw the Reds temporarily move into the top spot after Chelsea started to wobble, but that run from November until February saw 19 points dropped. 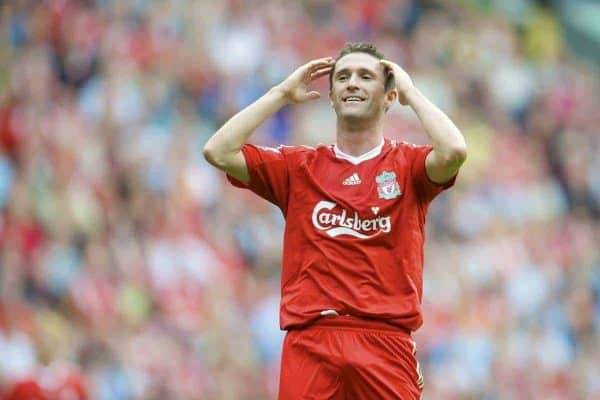 Not to mention Keane returning to Tottenham, Benitez withholding from committing his future to the club amid continuing off-field altercations regarding the control of the club – it’s night and day from where we find Liverpool today.

And who can forget the infamous ‘facts’ rant which, contrary to popular belief, actually saw Liverpool propel to greater heights and not wilt under the pressure.

But by the time March rolled around, the Reds were in third place, with United assuming the position as league leaders – but the best was yet to come in terms of performances and results.

And it all started with 12 days to remember, with emphatic victories over Real Madrid, United and Aston Villa which left those of the Liverpool persuasion in a state of euphoria.

A first leg 1-0 win at the Bernabeu was followed up with a jaw-dropping 4-0 victory at Anfield, with Torres continuing his devastating form and Gerrard running the show from the middle.

Fortress Anfield was at the peak of its powers and so was Benitez’s side, swatting away the then 10-time European champions at will and booking a place in the quarter-finals against Chelsea. 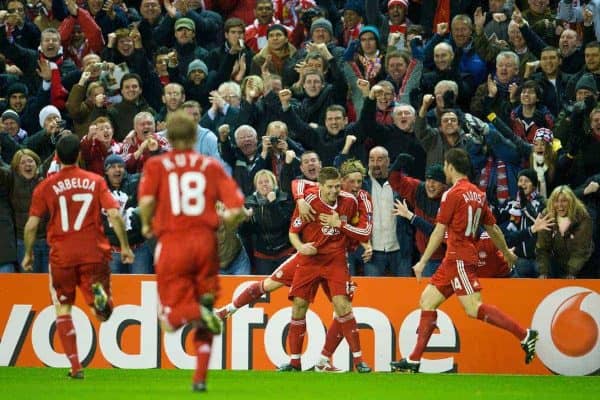 The momentum and good feeling followed the team to Old Trafford with what remains one of the best ever away victories, with United torn apart thanks to a mesmeric performance from the Reds.

Nothing short of three points was acceptable should Liverpool want to keep within striking distance of the title, and while a Cristiano Ronaldo penalty had made for ominous signs, Torres, Gerrard, Fabio Aurelio and Andrea Dossena had other ideas.

Liverpool left a formidable United defence shell shocked and aghast, Torres showing five fingers, Gerrard kissing the camera and Vidic shown yet another red card – what was not to love?

A 5-0 thumping of Villa followed soon after as Liverpool continued to fire on all cylinders, elevating them to second place and just a single point behind United – a position they would ruefully retain come the final day.

A topsy-turvy 4-4 draw with Arsenal was the last time points were dropped in the league following on from the defeat at Boro, with the game widely remembered for the influence of Andriy Arshavin as he pegged us back at each time of asking.

The damage to the title charge, however, had already been done in the earlier months.

United would only drop a further five points following Liverpool’s mauling, with a plethora of late goals and fortunate decisions (here’s looking at the Spurs game where a penalty kickstarted a comeback from two goals down to a 5-2 win).

Liverpool’s season would effectively be over in April, with the title out of their hands and Chelsea exacting revenge in the Champions League having secured a win in both legs of their quarter-final tie.

Four points. The Reds would end their memorable, scintillating season four points adrift of the top spot but with their record points tally in the Premier League era.

It was ultimately another campaign which left many wondering what might have been, and the Liverpool faithful were forced to wait a further five years for another tilt at the title – which provided yet another sense of deja vu.

A Team to Behold

While the campaign failed to end as we all had hoped, one thing which is not up for debate is how special Benitez’s side truly was.

For all their talent and ability, it was a shame they never capped off their time with a piece of silverware, with the squad bursting with talent in all departments.

From the ever-consistent Reina to Carragher, Martin Skrtel, Daniel Agger, Sami Hyypia, Fabio Aurelio and Alvaro Arbeloa to Alonso and Javier Mascherano and of course Gerrard and Torres.

There was then Kuyt, Albert Riera, Yossi Benayoun and Ryan Babel all chipping in with invaluable performances – but the crux of it all was that despite the quality in the XI there was not enough of a supporting cast, with a lack of squad depth proving too much to overcome.

With Torres missing a third of the season, the Reds relied primarily on N’Gog, Babel, Andriy Voronin and Nabil El Zhar, while United could turn to the likes of Ronaldo, Wayne Rooney, Tevez and Dimitar Berbatov.

While the side of 2018/19 will give them a run for their money in terms of the best Liverpool side never to win the title, it can be taken for granted how remarkable they were in 2008/09. 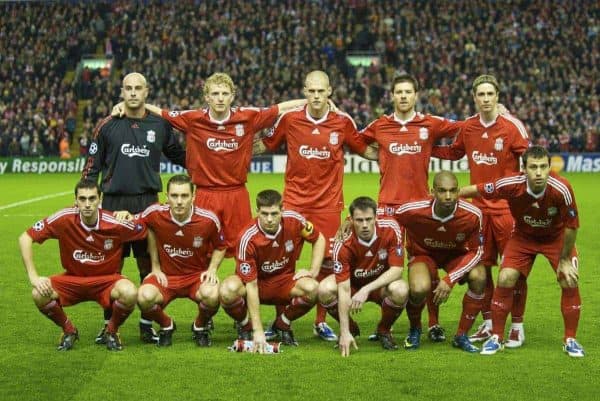