Joel Matip has started the next phase of his return to first team action as he returned to training on Tuesday.

The centre-back has been absent from Jurgen Klopp’s side since aggravating a knee injury against Man United in mid-October, a period of time which has seen him miss 19 games up until now.

A definitive return to action was largely unknown until Klopp provided an update prior to the new year where he looked to February as a time when Matip would be most likely to make his return.

And he appears on course having been photographed training at Melwood on Tuesday night, taking part in, what you would suspect to be, light drills after a lengthy absence.

His presence alongside his teammates will come as a major boost to Klopp after having seen his squad hit by injury at the most congested point of the season, where Joe Gomez and Virgil van Dijk have needed to forge ahead as the two sole senior centre-backs – with Dejan Lovren also out through injury. 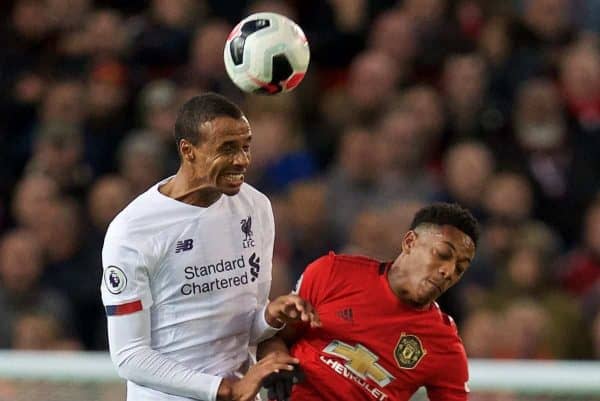 Gomez has stepped up in both Matip and Lovren’s absence, proving key in keeping eight clean sheets in his last 10 appearances, ensuring he will not be easy to displace upon their return.

Moreover, Matip’s return to training coincided with Xherdan Shaqiri‘s, who has been absent since late December with a hamstring strain, while Fabinho is also expected to take part in training in the coming days.

It leaves Klopp with Lovren, Naby Keita and James Milner occupying the treatment room – with the latter pair picking up respective groin and hamstring injuries over the last week.

A definitive prognosis on their injuries has yet to be provided, but the manager is likely to provide more details in his press conference on Friday ahead of Liverpool’s trip to Tottenham.