It was not all pretty but Liverpool once again stood strong and secured their 22nd win of the season against a side many had tipped to be a stumbling block.

Another challenge was laid before the Reds with a daunting trip to Molineux, which has claimed more than one of the ‘big six’ in recent times.

For many onlookers and those of the Red persuasion it was one which was approached with caution such is the threat Nuno Espirito Santo’s side possess.

And ahead of the meeting, Jurgen Klopp was clear that his side could not afford to play “on a 50-60 percent basis…otherwise, you’ll have absolutely no chance.”

Life on the road, however, got off to the perfect start thanks to the awareness and game intelligence of the Liverpool skipper.

And it was ultimately a game which had his mark all over it.

A dead ball situation, a Trent Alexander-Arnold delivery and a Jordan Henderson headed goal, the first of his career in the Premier League, and one which tipped the scales in Liverpool’s favour.

On the first look, it was a well-timed and executed run, on second look an intentional and purposeful move which saw him take advantage of Wolves‘ zonal marking and rise to the ball uncontested, leaving Joao Moutinho in his wake.

The eye for the bigger picture from a move which was born on the training pitches and he was rightly serenaded by the travelling Kop and later by his manager after another “unbelievable game.”

It was just his second goal of the campaign, yet it was another nod to the work and graft Henderson puts in week in and week out – as his tasks are ones which usually go under the radar and gain few admirers.

Henderson has long polarised opinion, but if there was any shadow of doubt regarding what he brings to the side then it can be swiftly disregarded.

The level of attention he has received has rightly risen ten-fold, and Jurgen Klopp has noted the growth he has undertaken since he took over at Anfield over four years ago.

“He is now calmer in certain situations. His self-awareness, self-confidence grew again from a proper level,” the boss said.

And a calming influence was what was needed, with Sadio Mane leaving the field just after the half-hour mark with a suspected hamstring injury and Wolves equalising through Raul Jimenez merely six minutes after the break.

Liverpool were under constant interrogation from a Wolves side who have proved a formidable outfit in the two meetings this season, they were on the hunt for a second goal and the Reds’ relentless schedule looked to have come into effect.

Adama Traore, who Klopp described as “pretty much unplayable” post-match, burned Andy Robertson on more than one occasion, Alisson was forced into a number of saves and Joe Gomez and Virgil van Dijk no doubt saw more action in one half than they have in a number of games combined this season.

It is a testament to the hosts, they are certainly a contender for a European place come the end of the season and Klopp and Co. will no doubt breathe a sigh of relief that they will not have to come face to face with them again this season as, for the manager, they are “so different to everything else you face during the year.”

And while momentum looked to be in Wolves‘ hands, with the crowd spurring them on and Liverpool’s flurry of chances through Mohamed Salah and Roberto Firmino coming to nothing, the inevitable happened.

The skipper was again central to it all.

All but tackling Salah on the edge of the area and playing a first-time pass into space for Firmino to land the killer blow, a goal which Klopp accurately categorised as a “worldie” – as Liverpool again refused to accept anything but a victory.

With the final whistle, Henderson has now played 982 minutes from a possible 990, which is excluding the FA Cup win over Everton, a show of incredible endurance and one which epitomises this Reds outfit.

There’s no doubting Liverpool’s backs were against the wall for large parts of that second half, yet there was no shrinking away from the challenge, Henderson let his voice be heard, and as Klopp noted kept “everybody on their toes,” as did his teammates and the manager. 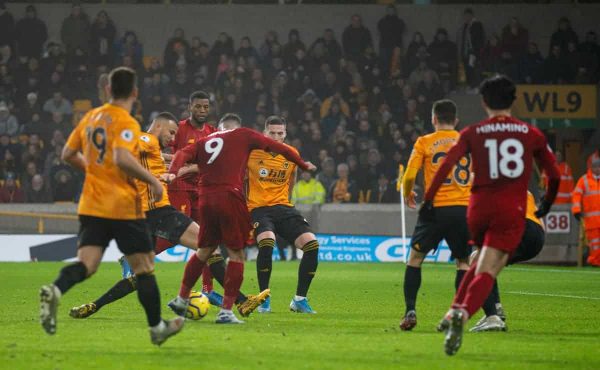 The demand they place on each other has got them to this point, 67 points from a possible 69 and 16 ahead of Man City with a game still in hand.

And while Liverpool had a number of standout performers on the night, most notably at the back, it was Henderson who was the metronome, keeping his side ticking and accountable as they refused to accept a 1-1 draw.

With 23 games on the board, aside from City and Leicester, the teams below Liverpool are all closer to the relegation zone than they are the Reds, with the showing at Wolves a clear example of the mental fortitude which has seen them hit their current heights.

It’s one step closer to the ultimate goal and another tough test on the road overcome on an evening which many predicted would be where the Reds would stumble.

But here’s to you Jordan Henderson, Liverpool love you more than you will know.