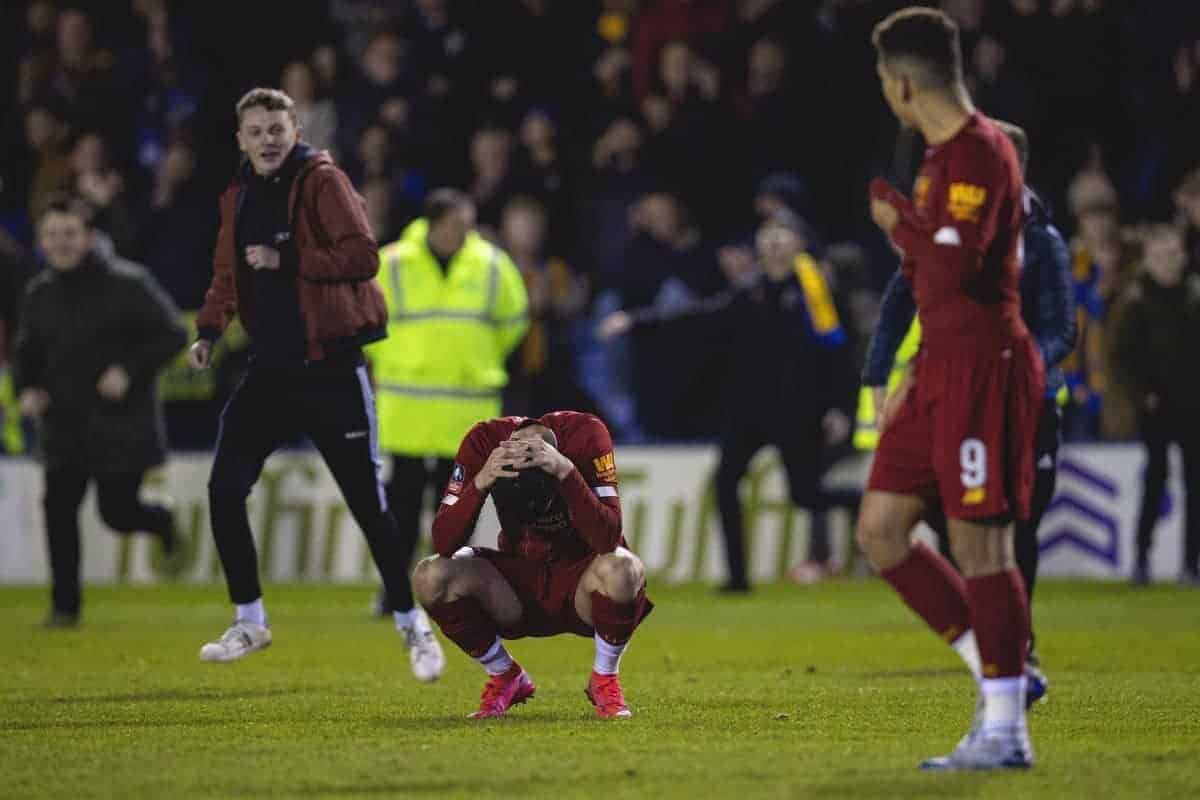 Liverpool fans were left lamenting the absence of VAR and the rustiness of a returning trio after a 2-2 draw at Shrewsbury in the FA Cup on Sunday.

Jurgen Klopp made 11 changes to his side for the fourth-round clash at New Meadow, with Joel Matip, Dejan Lovren and Fabinho all handed their first starts after injury.

The Reds started brightly, with Pedro Chirivella laying on a brilliant opener from Curtis Jones, before a comical own goal from Donald Love made it 2-0 just after the break.

Liverpool produced a shocking performance thereafter, though, and a pair of goals from Jason Cummings sealed a famous 2-2 draw for Shrewsbury and a replay at Anfield.

Here’s how fans saw the stalemate at New Meadow on Facebook, Twitter and the This Is Anfield forums.

Chirivella and Jones were among those to receive praise…

Curtis Jones is a future Liverpool legend. Full of talent and never short of confidence . ??

Until a few weeks ago Pedro Chirivella was a bit of a figure of fun amongst many Liverpool fans, myself included, and while a few cup games is hardly a great indicator it’s very clear there’s more to him than that. Very tidy, effective footballer.

Starting to make sense why we never got rid of Chirivella over all these years ???

“Chirivella had a superb game, getting stuck in when required, keeping things simple when needed and playing some fine passes; his through-ball to Jones for the opening goal was quite delightful. Very close between our two Spaniards for MOTM honours today.”

Chirivella has gotten a lot of shit over the years but he's been class the past few games.

While Adrian was clear Man of the Match…

So refreshing to have a top quality back-up keeper to Alisson that we can play and have full confidence in. Adrian has proved to be a great piece of business on a free and made up that he’s had his own contribution to our success in the league also. #LFC pic.twitter.com/JjdXR44nbB

Adrian is the best backup keeper in the world, none of this Romero trash

Adrian San Miguel. Best No.2 in the world.

Not sure there’s a better No.2 in the Premier League than Adrian. Massive save.

cba to do player ratings cause everyone was fucking shite

adrian in every cup game pic.twitter.com/lAgTdIvC2Z

But Fabinho, Matip and Lovren were noticeably “rusty”…

The two centre backs and Fabinho were our worst players, all three looked so rusty coming back from injuries.

If you don't believe match fitness is a thing, watch Fabinho here. Absolutely miles off the pace.

Matip, Lovren and Fabinho look like they haven’t played football in 20 years

Fabinho predictably rusty so far. These minutes will do him good after that long absence

“Worst performance for a long, long time, no surprise…we played with the same panic-strewed bullshit as our captain has produced most of his career here. Only slightly worse than Matip though. Chuckle brothers would be a compliment.”

Fabinho has been poor so far but he's been out for 2 months, of course he's going to be rusty

Lovren comes back and we suddenly look like 2015 Liverpool, even Nathaniel Phillips kept a clean sheet and that was a Merseyside Derby ffs

A pair of decisions against the Reds saw calls for VAR…

Only been playing without VAR for 65 minutes and we’ve had a blatant handball ignored and a foul outside the box given as a penalty.

Should be a free kick, but it’s a pen.. that’s why VAR favours us, because without it, we get shit decisions

Shrewsbury deserved that. Poor from #LFC. Me, I'd name a team of kids for the replay especially if it is in the middle of the winter break.

Klopp will be fuming. FA cup replay during our supposed winter break.

“I fully expect we will put it right and win the replay, but we don’t need more games. We’ve seen so much good stuff that we are getting spoiled. That was a reality check.”

– Red over the water on the forums.

Absolutely fair play to Shrewsbury for that second half. Fully deserve their replay.

“Extra minutes for the kids in the replay. That’s about the only positive from tonight.”

Credit to Shrewsbury Town. Fought back for that draw and deserve the replay at Anfield. We may not like the extra fixture but all our own doing.

“I’m gutted we have another fixture to squeeze in now, but credit where credit’s due, Shrewsbury played brilliant tonight and deserve the replay!

Fair play to Shrewsbury town, fought their socks off in the second half and earned themselves a well deserved replay at Anfield!! Tough lesson for our fringe players and youngsters for sure, switched off when we went 2-0 up!!!