Liverpool ground their way to a priceless 1-0 win away to Tottenham on Saturday evening, with Roberto Firmino starring for the Reds.

Jurgen Klopp‘s side faced another vital Premier League game, playing inside the eye-catching Tottenham Hotspur Stadium for the first time.

Liverpool dominated for the majority of proceedings and the match was decided by a clinical Firmino strike in the first half.

The Reds were tested in a nerve-wracking finale—Giovani Lo Celso missed a gilt-edged chance late on—but they held on to record a massive victory. 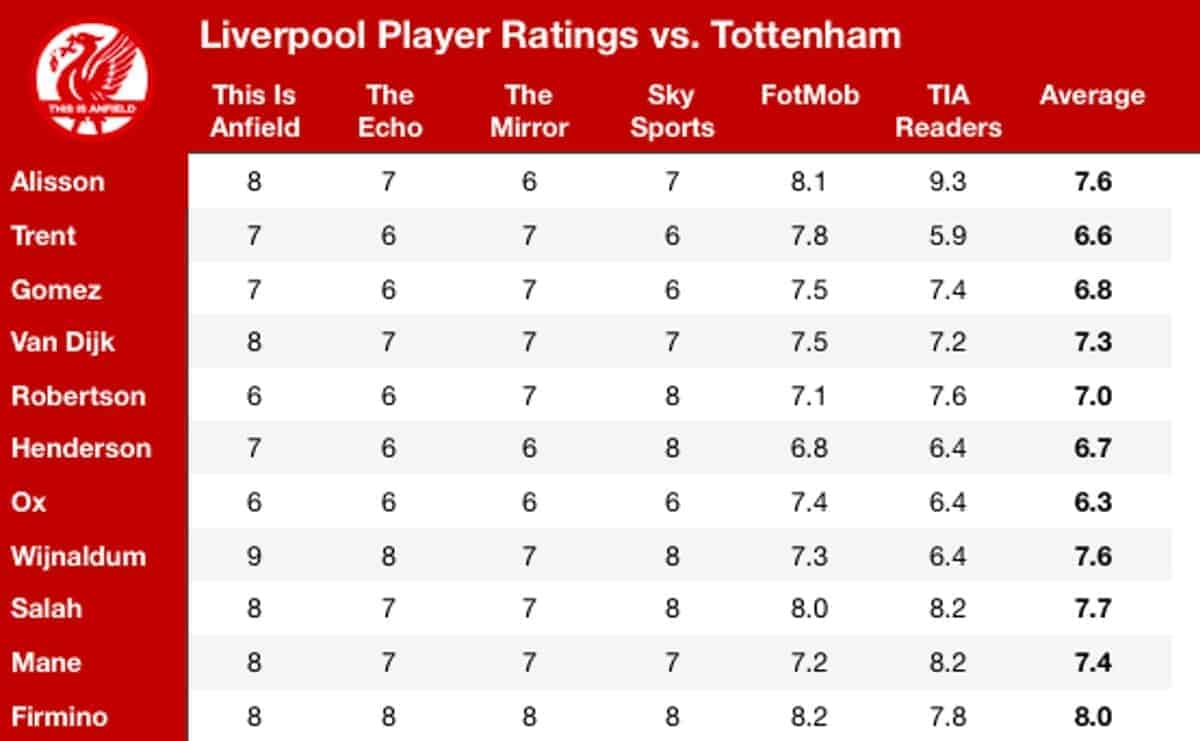 It was Firmino (8.0) who scooped the highest average rating, delivering a nerveless finish on another huge day in the title race.

The Brazilian did far more than find the net, however, leading the line superbly with his touch, vision and selfless work ethic.

The Mirror‘s John Cross described Firmino’s work rate as “exceptional,” while This Is Anfield’s Henry Jackson praised him for “knitting things together beautifully in his own elegant way.”

Mohamed Salah (7.7) was next in the reckoning, on a day when he provided the assist for Firmino’s winner.

Ian Doyle of the Echo felt the 27-year-old “constantly hounded the Tottenham back line,” causing havoc with his pace and strength.

Third place was shared by Alisson (7.6) and Gini Wijnaldum (7.6), both of whom made crucial contributions in north London.

Jackson called Alisson “the best goalkeeper in the world,” with his “world-class handling” vital in the second half.

The all-action Wijnaldum won a “one-sided affair” up against Christian Eriksen, according to Sky Sports, and Cross rightly said he was the “pick of the midfielders.”

Strangely, though, Wijnaldum’s rating was significantly lower among the This Is Anfield readers, who deemed his performance the joint-second worst.

Alex Oxlade-Chamberlain (6.3) got the lowest average and Doyle was of the opinion that he got “lost in the midfield muddle before the break.”