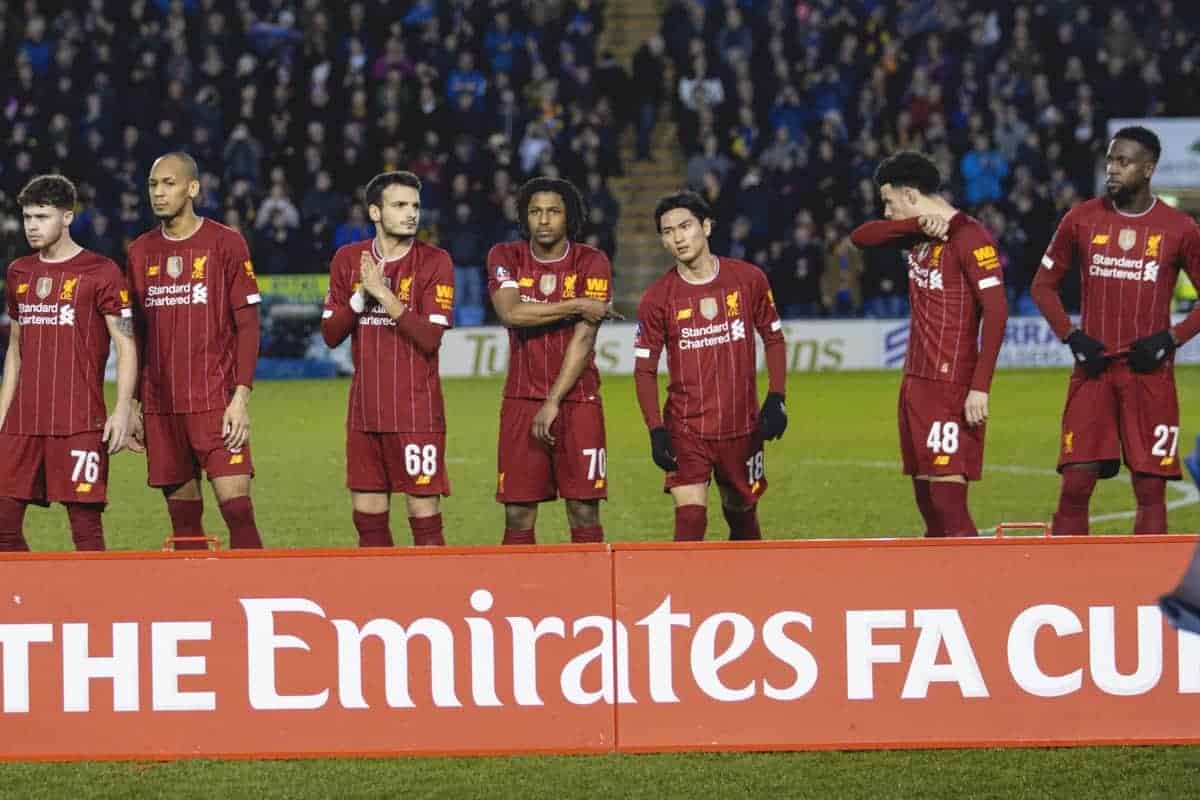 Neil Critchley could hand three more Liverpool youngsters their first-team debut as he leads the under-23s into the FA Cup replay against Shrewsbury.

The young Reds are back in senior action this week as Jurgen Klopp is once again forced to delegate his duties as the result of scheduling issues.

Unlike in December, when their involvement at the Club World Cup required Liverpool to miss the League Cup quarter-final at Aston Villa, Klopp and his players are not obligated to be elsewhere this time around.

But the manager has taken the decision to skip this replay and instead “respect” the winter break, perhaps rightly so given its intention.

This leaves Critchley will a difficult task against a League One side that drew 2-2 with the Reds at New Meadow last time out, though less difficult than the trip to Villa Park.

He is boosted by the availability of a host of more experienced youngsters, and has a few selection quandaries ahead of kickoff.

The obvious team news ahead of the replay is that none of Klopp’s senior squad will be involved.

This includes the likes of Joel Matip and Dejan Lovren, despite their lack of minutes since returning from injury, along with Takumi Minamino, who already had a winter break prior to joining from Salzburg.

Instead, Critchley’s squad will be drawn entirely from the under-23s and under-18s, though unlike in the League Cup he will be able to call upon Neco Williams, Curtis Jones and Harvey Elliott.

Another teenager with senior experience from this season, Yasser Larouci, may miss out however, though the club’s medical staff will leave it until the last opportunity to determine whether a hamstring problem will keep him sidelined.

Larouci’s potential absence is timed relatively well given the return of Adam Lewis from a knee injury, with Critchley describing himself as “well-blessed” in the left-back department.

Isaac Christie-Davies and Herbie Kane, who both featured against Villa, have since left the club on loan, which opens up the prospect of a full debut for Leighton Clarkson.

January signing Joe Hardy is expected to start up front, while Liam Millar should be in the side after his recall from a loan spell with Kilmarnock. 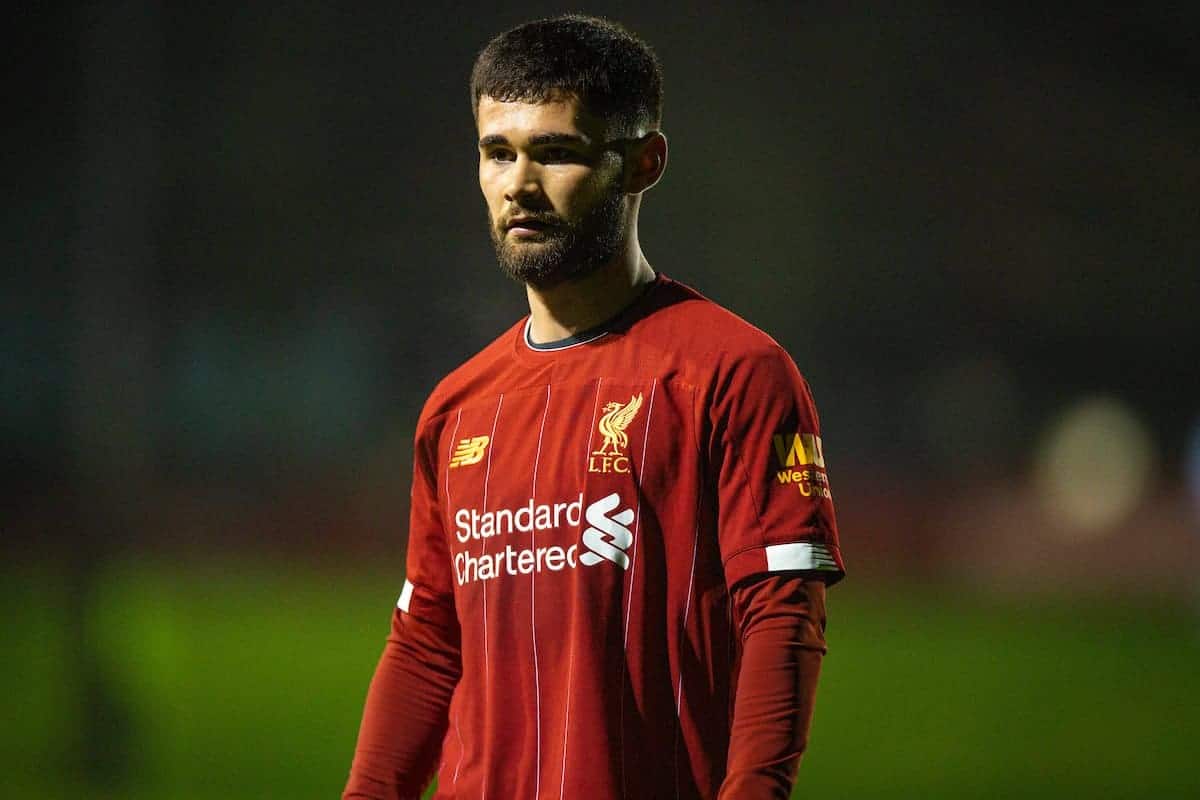 Liverpool have already seen 18 different players make their first-team debuts this season, including eight in the League Cup quarter-final.

Critchley is likely to hand out at least another two on Tuesday night, with the 41-year-old telling reporters on Monday that his group would be “under-20 at best.”

One of his oldest players will be over 20, but Hardy will be enjoying his first taste of senior competitive football after arriving from Brentford in January.

The 21-year-old is poised to lead the line, and could be a real threat to Shrewsbury’s defence having struck three times in his first five appearances for the U23s.

Joining him in attack could be Millar, who fans may remember from the 3-1 win at Bradford City in pre-season, when he made his unofficial debut before rejoining Kilmarnock on loan in August. 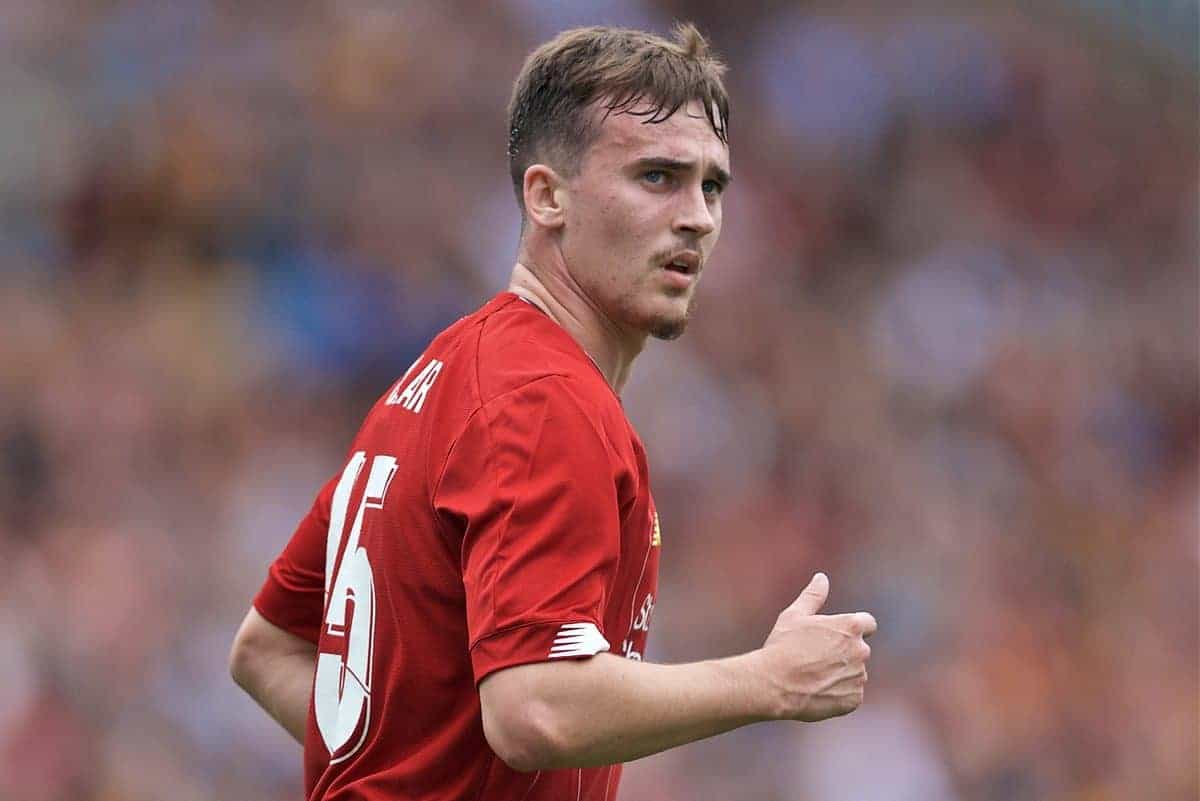 The Canadian was brought back to Merseyside midway through his spell with Killie last month to ensure depth in attack at academy level, with Rhian Brewster having moved to Swansea.

Lewis also featured for Klopp’s side in pre-season but, after sitting on the bench for the 2-0 win at MK Dons in the League Cup in September, missed a significant portion of the campaign with a knee injury.

Fortune should be in his favour this time around, and the 20-year-old should make his debut at Anfield.

As much as Critchley’s selection is restricted by the absence of all senior players, his squad will include a host of recognisable faces and he can call upon a strong core.

The majority of his starting lineup is easy to predict, with Caoimhin Kelleher primed to start in goal, Williams a shoo-in at right-back and Ki-Jana Hoever likely to partner Sepp van den Berg at centre-back.

If Larouci is out, Lewis is the prime candidate to start at left-back, despite the strong performances of Tony Gallacher this season.

Pedro Chirivella should marshal the midfield from a deep-lying berth, and Jones could be given the responsibility of leading the young Reds in the No. 8 role; Clarkson is the most likely third man.

With Elliott to start on the right, Critchley could deploy Millar on the left and Hardy up front, which should give Shrewsbury plenty of concerns in the defensive third: 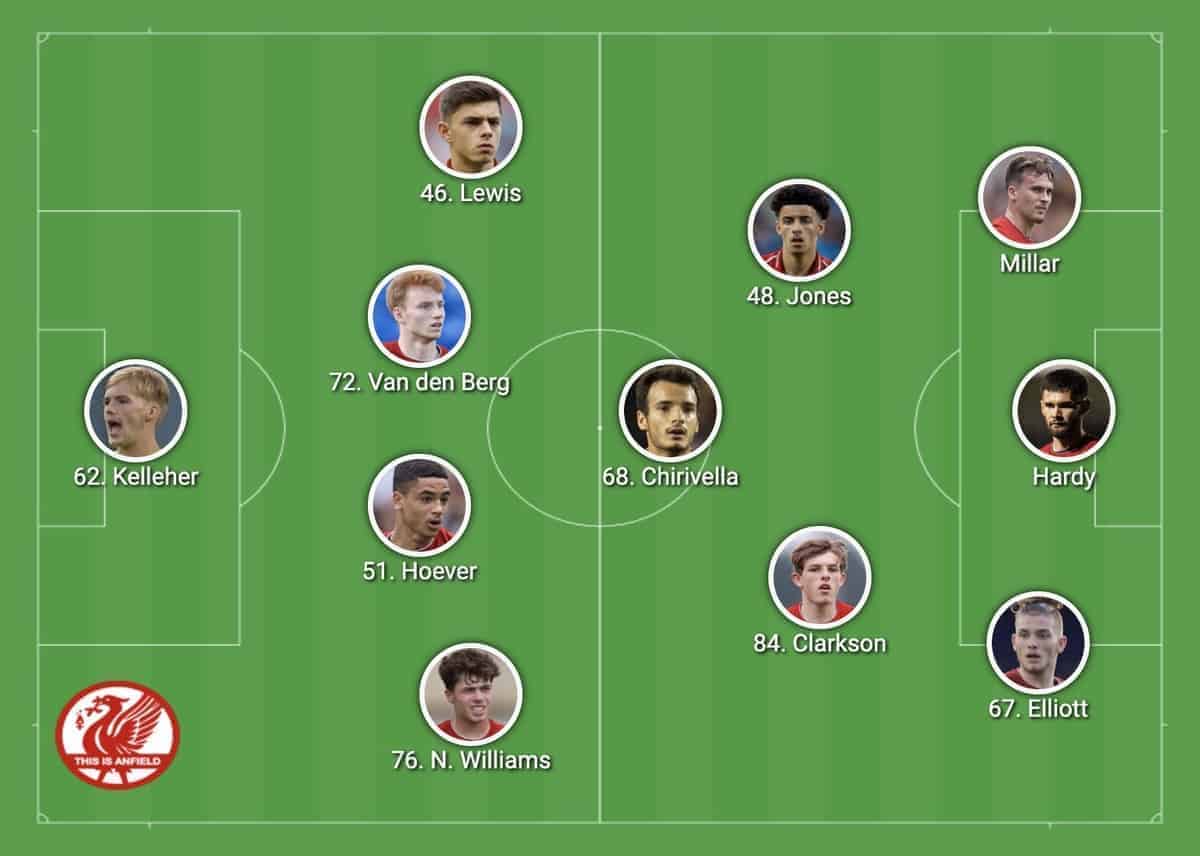 One of the biggest areas for consideration in Critchley’s side comes with the role of Jones, who has been more regularly utilised on the left this season.

If he remains in the attacking trio, this could hand Jake Cain an opportunity in midfield, joining his close friend and academy cohort Clarkson ahead of Chirivella.

Furthermore, if Larouci is passed fit it is likely he is preferred at left-back, with the Algerian building on his two outings in the FA Cup already this season.

The rest of the XI should stay the same, seeing Liverpool line up like this on Tuesday night: 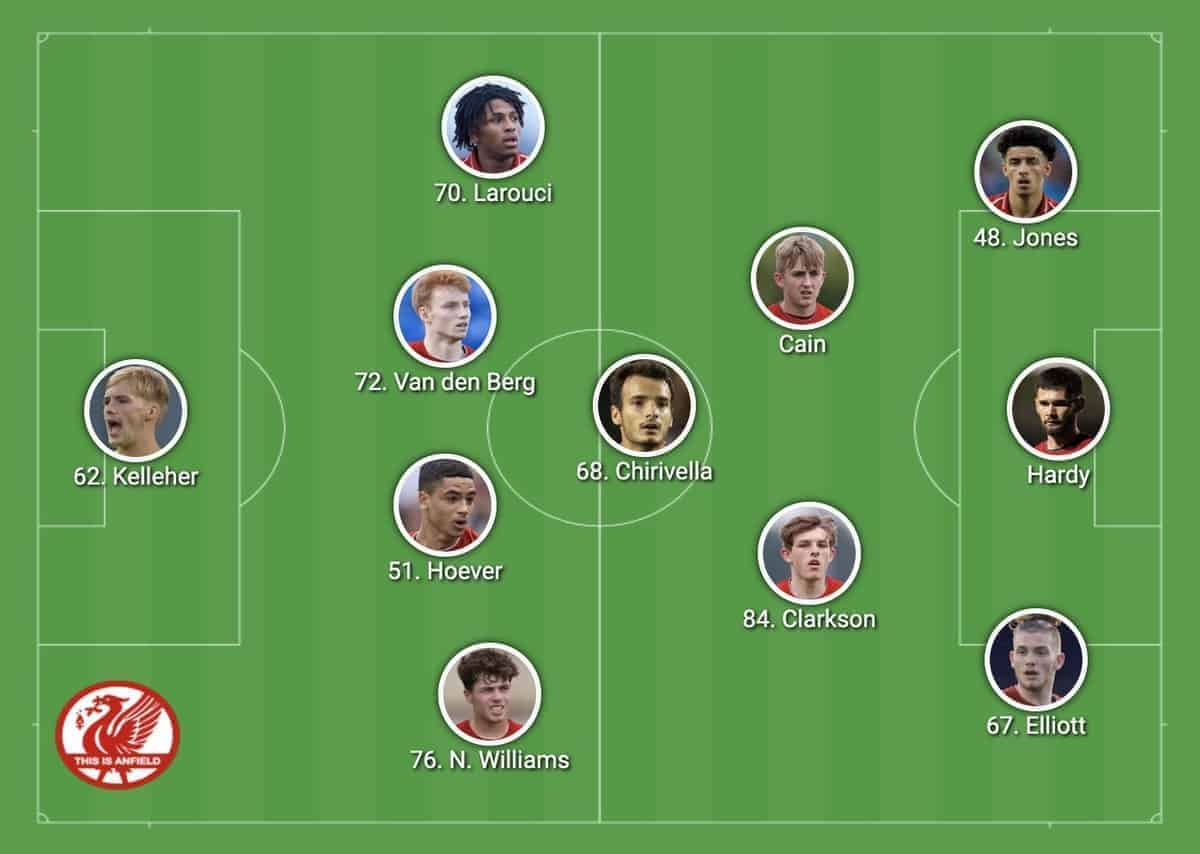 Either of these lineups would be considerably stronger than that which lost at Villa Park a month-and-a-half ago, and closer to the side which pushed Oldham Athletic to the limit in the EFL Trophy in August.

It will no doubt be a tough task for the young Reds regardless of who takes to the field, but Critchley should be confident of a solid performance at Anfield.