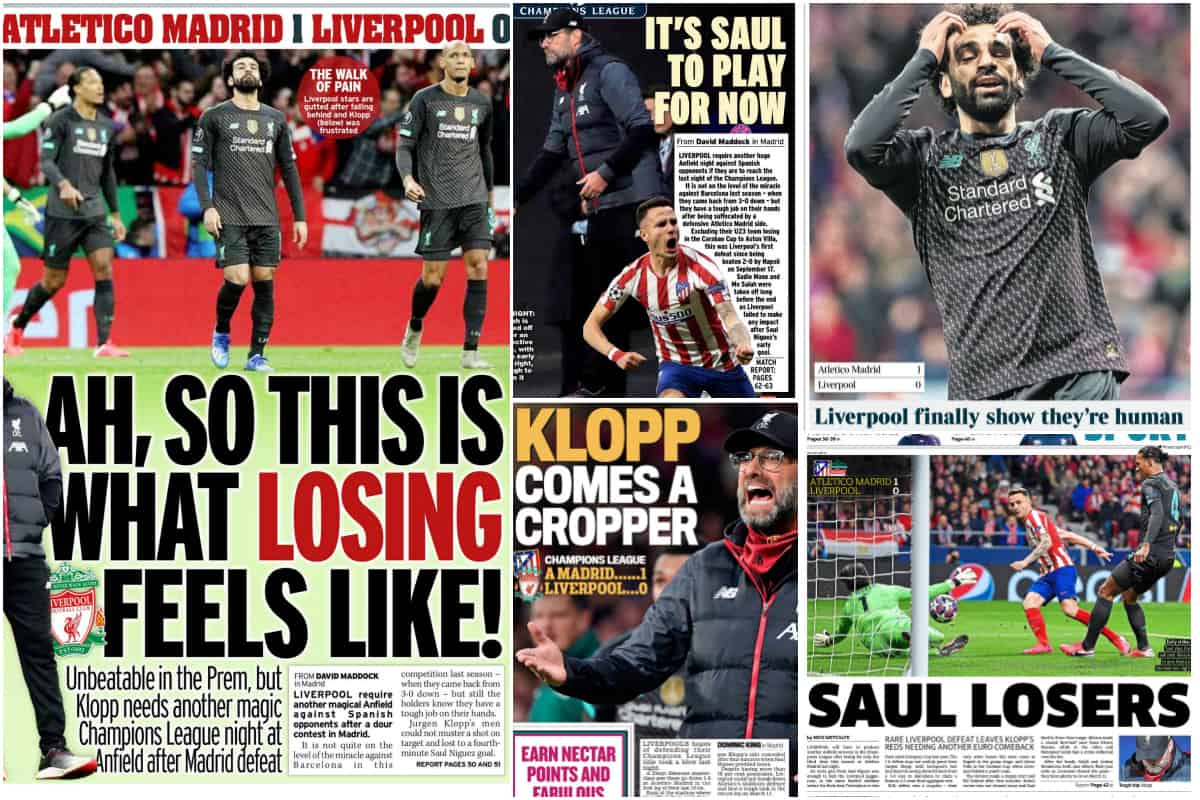 The media assessed that Atletico Madrid ‘did a job’ on Liverpool and gave the Reds a taste of their own medicine in the 1-0 loss in the Champions League.

Saul Niguez’s fourth minute strike condemned the Reds to a rare loss on a hugely frustrating night at Wanda Metropolitano.

The Reds have it all to do at Anfield to keep hopes of defending the European crown alive, and it will be a big test against a side of Atletico’s incredible defensive excellence.

The power of Anfield will be needed in that make-or-break second leg in three weeks’ time, but before focus turns to that clash, here’s how the media assessed the 1-0 loss in Madrid.

The Mail’s Dominic King was surprised by how the Reds had no answer to finding route to victory, thus assessing that Liverpool were not prepared for Atletico’s unique style and intensity:

“For once, Liverpool had been set an examination that was proving beyond them and nothing they did was making a difference.

“This really was the most they had been tested since tussling with Flamengo in Doha during the Club World Cup final in December. The Brazilians set an exam but Atletico were a different level.

“Nobody in the Premier League has a comparable style and while Liverpool dominated possession, they kept being taken down cul-de-sacs.”

“But this wasn’t simply Liverpool having an off night. This was an occasion when their opponents turned the screw so tightly that they could not find a way to cut loose and play their usual blistering attacking game.”

BBC Sport’s Saj Chowdhury summarised the night as Liverpool receiving “a dose of their own medicine”, with Atletico beating the Reds at their own relentless pressing game:

“The Reds were given a dose of their own medicine as Atletico harried and hassled throughout, limiting them to just two clear chances and no shots on target.

“What faced the Reds was almost a mirror image – a team that relentlessly pressed and got numbers forward on the counter.”

The Liverpool Echo’s Ian Doyle felt the Reds simply failed to cope with Atletico’s dark arts, but also criticised the nativity of the referee in failing to spot and deal with it:

“But then there were the antics from Diego Simeone’s team. And, as anyone who has crossed swords with the grizzled Argentine and his disciples knows, nothing can prepare for that.

“Indeed, referee Szymon Marciniak was hoodwinked on more than one occasion, as free-kicks were curiously earned, time was wasted and as much as possible was done to put Liverpool out of their stride.”

And Doyle, again, focussed on how the Spanish side’s deliberate targeting of Sadio Mane was a crucial turning point in the tie:

“It is, of course, very much part of the game and while no team is averse, the Spaniards veer dangerously close and occasionally over the line. What’s more, it works. Particularly in the case of Sadio Mane.

“Job done. Klopp, perhaps highlighting a lack of faith in the officials rather than his own players, replaced Mane at the interval, removing a huge threat from an already struggling attack.”

Writing for Goal, Neil Jones explained how conceding an early goal was a killer blow as it allowed Atletico to play the very game they are so effective at:

“Atletico landed an early blow and then sat back and absorbed everything Liverpool threw at them. This is a team that loves to defend, a team that prides itself on its toughness and its organisation.”

The Independent’s Mark Critchley assessed that the Reds didn’t do enough in possession to disrupt Atletico’s disciplined set-up, noting also that Liverpool have struggled when facing a 4-4-2 system in Europe:

“All Liverpool’s rotations and manipulations of the ball were easy on the eye but fundamentally failing to distort Atletico’s shape.

“A humble two banks of four and deep-set defence has caused Klopp more problems than any other set-up during the last two-and-a-bit Champions League campaigns. Here, they found themselves up against the modern masters of that system.”

The Telegraph’s Sam Wallace explained that a big factor behind the struggles was Liverpool’s inability to execute their pressing game due to Atletico’s disinterest in enjoying any sustained spell of possession:

“Liverpool pressed when they could but the reality was that part of the game was largely redundant against an opponent who had only 25 per cent of the first half possession – and probably considered that a little on the steep side.”

Doyle noted how Klopp’s side were unable to find any consistency in their passing rhythm due to Atletico’s constant niggly, cynical fouls breaking up play:

“Atletico’s famously niggly approach also disrupted Liverpool’s attempts to maintain rhythm in their forward efforts, the Reds unable to build on whatever momentum came their way.”

“Full-backs Sime Vrsaljko and Renan Lodi stayed focused as they quelled the threat of their Liverpool counterparts, while the more experienced Stefan Savic and Felipe were immovable barriers as they dealt with Roberto Firmino, Salah and Mane.”

ESPN’s Shaun Reynolds was unimpressed by Klopp’s work on the night, assessing that the German’s subs were ineffective and that Liverpool’s tactics played into Atletico’s hands:

“The decision to bring Divock Origi on in place of Sadio Mane at half-time proved uninspired, though the former didn’t exactly enjoy his best game either. His decision to take Mohamed Salah off but leave the uninspired Georginio Wijnaldum on, perhaps won’t go down as his best call.

“Liverpool were beaten tactically, proven by their total domination of possession but lack of clear chances. Wings were exposed, and Jurgen Klopp‘s side couldn’t utilise the time they had on either wing.”

And the Mirror’s Matt Maltby thought Liverpool always faced an uphill task to get back into the game once Klopp took off Sadio Mane:

“[Mane] picked up a booking, escaped a red card – and rightly so – before being hauled off at the break with Klopp bringing on Divock Origi instead, though the substitute flattered to deceive.

“It’s unsure if that decision was forced due to Mane carrying an injury or because of his sending-off escape, but it was undoubtedly a blow for the Reds as Origi doesn’t carry the same attacking threat as Mane.”

Reynolds thinks the Reds will have to pass the ball with more speed in order to break down Atletico’s stubborn defensive banks of four:

“Tactically, Liverpool were outsmarted by their opponents and must improve their ability to pass the ball quickly for the second leg at Anfield.”

The Evening Standard‘s David Lynch saw an “angry Liverpool” leave the pitch at Wanda Metropolitano, and believes the Reds can channel this to take revenge at Anfield:

“What might help, though, is the resentment that was clear in the body language of every player as they slumped from the Wanda Metropolitano pitch, and in several of their post-match interviews.

“It seems that Klopp finally has an angry team at his disposal once more, and that could be crucial going into a second leg where every outcome remains possible.”

But King doesn’t think Diego Simeone’s “gang of streetfighters” will at all be fazed by the power of Anfield:

“If there is one team in the competition who will not be cowed by an Anfield frenzy, it is this gang of streetfighters.”

“For Liverpool, a one-goal defeat is not the worst possible result, of course, even if the lack of an away goal could prove especially harmful.

“But Jurgen Klopp may find that turning around a three-goal deficit against Barcelona is a trifling matter when compared to prising a much slimmer lead out of Simeone’s hands.”