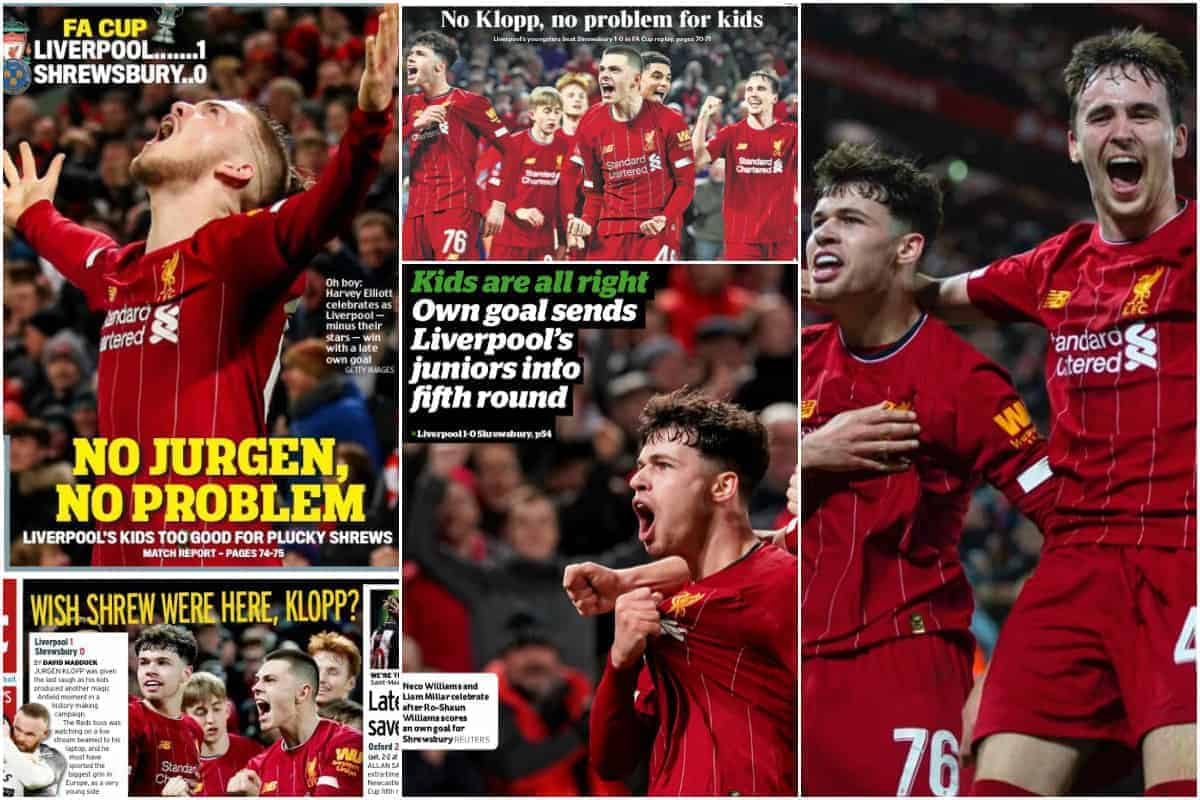 The media were full of praise for a young side who played the Liverpool way in a 1-0 win over Shrewsbury in the FA Cup.

The kids are more than alright.

A Liverpool side boasting seven teenagers and three debutants from the off dominated League One’s Shrewsbury and rightfully earned a place in the fifth round of the FA Cup.

Neil Critchley was the man in the dugout as his young Reds rose to the occasion and proved there was certainly no disrespect for the competition in these parts.

After dominating the lion’s share of possession the final ball was all that was evading the Reds, until the last 15 minutes when Ro-Shaun Williams turned it into his own net to secure a memorable victory for Liverpool.

And Anfield was on their feet after a performance which showed the future is more than bright.

Here is how the media viewed Liverpool’s momentous victory at Anfield.

The Mirror’s David Maddock thought the young Reds showed the “same qualities” as the first team, just on a smaller scale:

In some ways this was almost up there with the deeds of the senior team.

The German coach wasn’t here in person to see his impressive junior side show fight and spirit, and crucially all the same qualities of the first team but in miniature, as they played with similar style, and tempo.

For Ian Doyle, of the Liverpool Echo, the evening proved to be a victory for the work of the club’s academy as a clear system from the top of the club to the bottom was clear to see:

They deserved this moment, sticking to the principles that have been ingrained from the first team right through to the youth levels. This was a triumph for the Academy as much as anything else.

Despite the first team being nowhere in sight, The Independent’s Richard Jolly was of the view that the club’s “winning mentality” is a habit that transcends all age levels:

Liverpool’s winning mentality feels so strong that they can hamstring themselves and yet go through, if not by accident, then by habit. 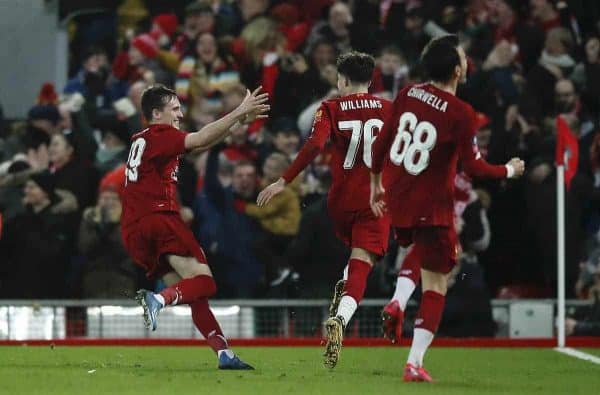 Writing for the Daily Mail, Dominic King was in agreement that the spirit and ability of the first team was present at Anfield:

It might as well have been Virgil van Dijk and Mo Salah out there. Better than Van Dijk and Salah, actually, for these were local boys, many of them, from places like Toxteth and Rainhill, in St Helens.

For the Telegraph’s Chris Bascombe, it was the collective effort and performance of Critchley’s side which impressed above all else:

What was most obvious was the technical and tactical superiority of the academy side, which is tougher to attribute solely to resources given Shrewsbury performed better in their first meeting against a team including several Champions League winners.

It was the whole package that impressed more than Liverpool’s individual performances.

Doyle was full of praise for Neco Williams after a crucial match-winning outing, but it was equally a performance which saw a number of players shine:

Neco Williams merited his part in the decider. He provided much of Liverpool’s goal threat…and staked his case to understudy Trent Alexander-Arnold as Anfield’s marauding right-back.

The likes of skipper Curtis Jones, Harvey Elliott and the exciting Williams, along with defenders Ki-Jana Hoever and Sepp van den Berg showed Liverpool have a ridiculously bright future.

With the deadlock broken in an in-direct manner, Maddock pointed to the Reds’ lack of cutting edge as a place for improvement.

But he was equally full of adulation for what appears to be the next right-back in waiting:

What Liverpool’s juniors lacked though, was a cutting edge up front, with most of their chances falling to the excellent Williams running from right back.

This Wales young international has such a huge future in the game, but he also has a formidable obstacle in his way in the first team, with Trent Alexander-Arnold not much older.

Yet he has some of the same qualities, with a dashing confidence down the flank, and a delivery to die for, that the likes of Wan-Bissaka at Manchester United would look at enviously.

It was Curtis Jones who caught the eye of King, highlighting the club’s youngest-ever captain not shrinking away from the challenge, rather rising to it in the only way he knows how:

From an early stage, you could see that the responsibility of leading a team of novices was not going to be a burden.

He is, of course, a player with much still to learn but one thing for sure is that his attitude – and ability – have given him the capacity to fulfil his potential at a club where you have to be elite if you want to thrive.

And for Goal’s Neil Jones, he was in agreement of the night’s skipper as he looked to shower praise in all lines of Liverpool’s lineup:

Jones is a star of the future, and this display underlined it. He took responsibility, he carried the ball, he tried his flicks and his tricks and he drove his side on.

From Caoimhin Kelleher in goal to the tireless Liam Millar in attack, they were heroes. Jones was brilliant, Chirivella too. Ki-Jana Hoever and Sepp van den Berg turned in performances that their compatriot, Virgil van Dijk, would have been proud of.

Williams and Lewis were outstanding at full-back, while Cain, Elliott and Leighton Clarkson played with a potent mix of youthful abandon and tactical discipline.

After scathing reports flowed freely after Jurgen Klopp’s decision, King was left to question exactly what was wrong about the stance as the Reds injected a much-needed “thrill” into the competition:

So what part of this was disrespectful, exactly? What part was a betrayal? Klopp gave the FA Cup the sprinkling of magic so many claim is missing. He gave it vitality, excitement, joy — and the thrill of the unexpected. For once, nobody knew how it would go for Liverpool. Not this Liverpool.

The argument is that by taking his stance Klopp has disrespected the competition, the opposition, even the broadcasters — oh, won’t somebody think of the broad-casters! — who declined to show this tie. More fool them.

Jones echoed the sentiment, the result and the performance was one which is the definition of what the FA Cup is all about:

Disrespecting the FA Cup? This was the kind of night which could revive it.

And while it was a result and performance which is in line with the cup, for Doyle it was one which was more important for the club itself:

Without even meaning to, they shoved disparaging words right down the throats of Liverpool’s critics. Disrespect the FA Cup? Pah.

Rather than be criticised for demeaning the competition, Liverpool should be praised for helping keep the spirit of the much-maligned tournament alive.

The boys did the FA Cup proud. And, more importantly, they did the club proud. What a night.

Finally, for Bascombe he was of the view Liverpool helped keep the FA Cup‘s life support on as he turned his attention to a possible quintet for the Reds this season:

Far from undermining the FA Cup, his deputy Neil Critchley and Liverpool’s youngsters played their part in keeping it on life support with one of the more romantic tales of recent years.

The contribution of the teenagers in both rounds of the FA Cup have added to the perception the spectators no longer turn up for mere football games in this venue; they are being treated to history.

Can an unprecedented quintet really happen? It is looking more plausible.