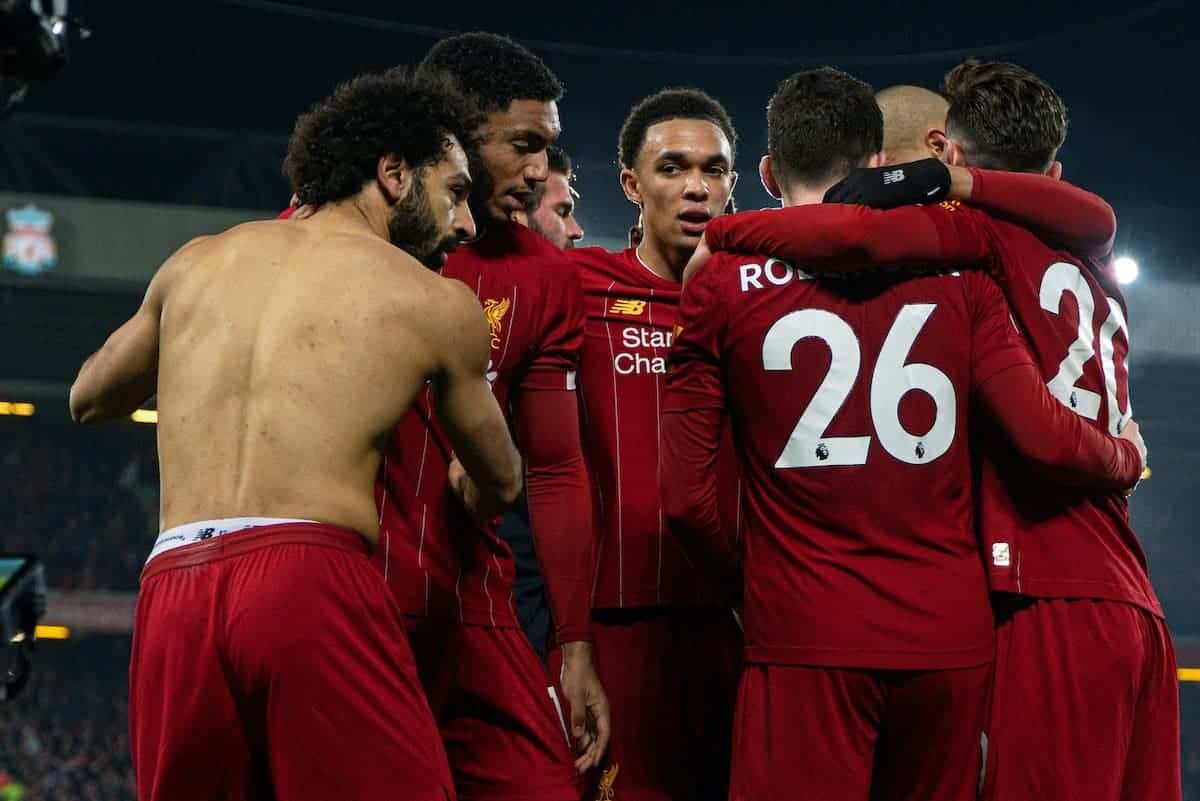 Liverpool are head and shoulders above the rest of the Premier League this season, but their position is by no means due to the top flight’s lack of quality or competitiveness.

Jurgen Klopp is currently overseeing his side re-write the record books as the Reds find themselves 22 points clear at the top of the table after 25 games.

Due to Man City‘s stumbles throughout the campaign, Liverpool need just 18 more points to clinch a long-awaited title – fewer if further points are dropped.

While the early parts of the campaign were dominated by Klopp’s side grinding out results, the Reds soon found their groove and, while few scoreboards have reflected their dominance, have largely navigated the league with frightening efficiency.

It means the Reds are on course to break the record of the most points obtained in one season, currently held by Man City in 2017/18 after picking up 100 on the way to the title.

Predictions of an era of dominance from Pep Guardiola’s side followed and the second title in as many years arrived.

Discussions of the strength of the Premier League rightly arose as a result, and with the Reds having emerged as the only side capable of dethroning City, the debate surrounding such issues appears to have increased tenfold.

Toppling the most expensive squad assembled in world football is a feat not to be ignored, especially considering the route the Reds have taken to build a team capable of doing so.

To dispel Liverpool’s achievements, many have thrown up comments that this is the ‘worst Premier League season ever’ or the ‘poor quality’ is paving the way for where the Reds currently find themselves.

But after the 25-game mark, the Premier League is in fact experiencing its most competitive season since 2015/16.

The findings are from the C5 index of competitive balance, which first sees the total points of the top five divided by the total of all 20 clubs to provide a C5 ratio.

The closer the value is to 100, the more competitive the league under question is.

In an era of increasing commercialisation and commodification the Premier League experienced a decline in competitiveness, as the graph below shows, with 2017/18 recording a competition high index of 154.85.

However, with Liverpool bridging the gap to City at the top in 2018/19 and the teams placed from sixth to 17th increasing their collective total points tally from 541 to 581, the league index dropped to 152.6.

While there are still 13 games left to play, the trend suggests that, if anything, come the conclusion of the season the 25-game index will continue to marginally decrease – as only 2016/17 ended the campaign with a higher index compared to the last four seasons preceding this one. 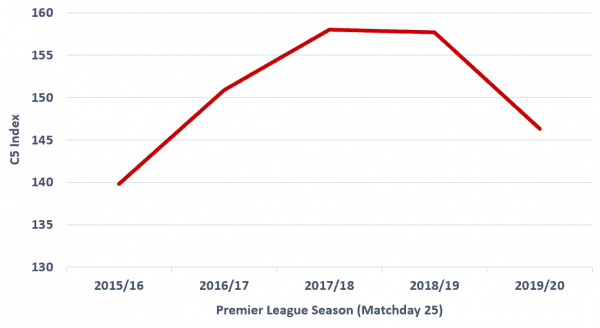 The downturn in form from the rest of the usual ‘big six’ in Man United, Arsenal, Tottenham and Chelsea can distort the view of how competitive the league is and challenges the notion of the regular suspects determining the top flight’s strength.

And it neglects the rise of Leicester, Sheffield United and Wolves, who each have a tight grip on a finish in the top half of the table and are all vying for European qualification.

The standard of performance of teams below the ‘big six’ have improved in comparison to the aforementioned seasons, with the current top five having amassed fewer points as a collective (251) than five of the last eight league seasons.

The Reds have not had it all their way throughout the season – Wolves, Sheffield United, Southampton, Man United and Tottenham, among others, asked question after question – but following a Champions League triumph the season prior and an insatiable appetite for winning, the Reds’ mentality is often a defining factor.

Unlike previous years whereby the Premier League has seen record lows for the level of competitiveness, this time around Liverpool are not dominating a weakened league, they are simply setting the standards and are in a league of their own.