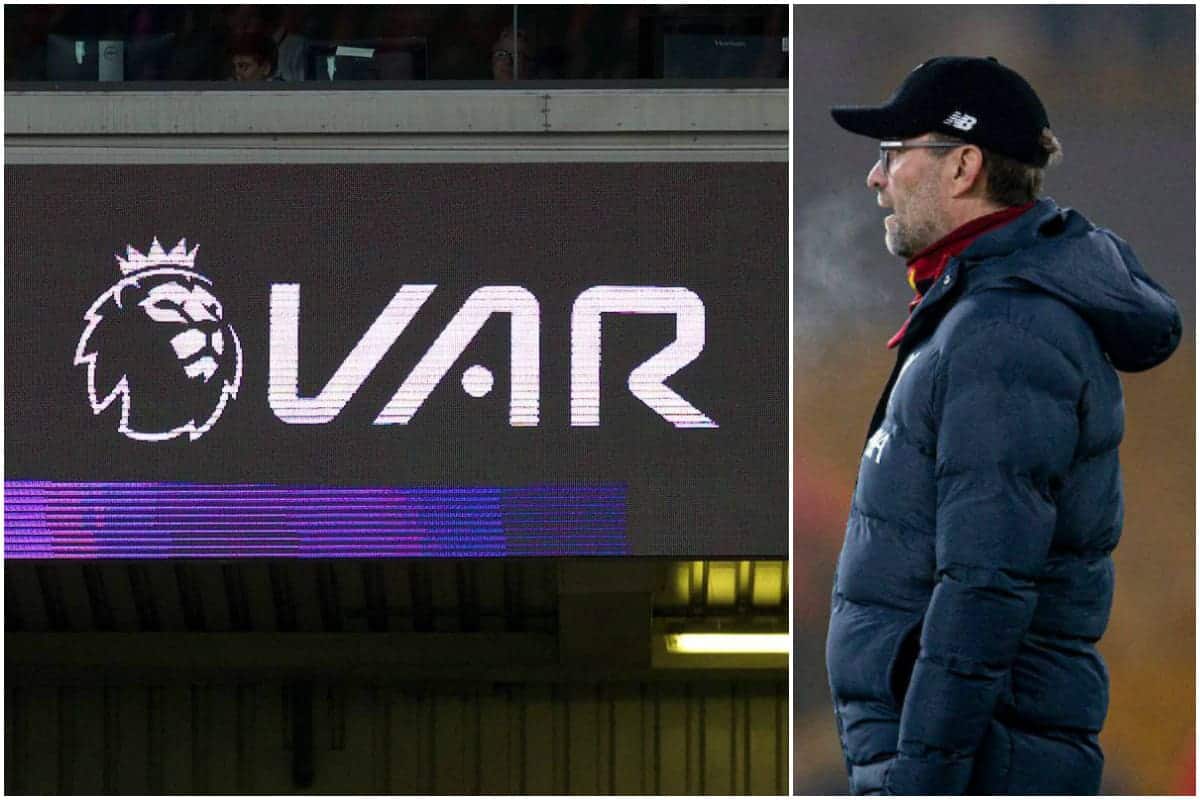 The permanent introduction of Video Assistant Referees to the Premier League this season has largely been a positive, but there’s still scope for improvement.

That has perhaps been particularly evident when it comes to applying offsides, as we have seen a host of goals agonised over for multiple minutes at a time, before the VAR decides they are the merest fraction of a centimetre off.

Despite the at times ridiculous murmurings of supporters about ‘bias’ and ‘cheating’, the system has worked both for and against every club this term in different circumstances.

From a Liverpool perspective, that was never more apparent than when Roberto Firmino‘s strike was chalked off against Aston Villa, with the graphical representation going against what the naked eye seemed to see.

The red line signifies Firmino and was aligned to his armpit, which was marginally ahead of the last Villa defender#AVLLIV pic.twitter.com/a2OnNWnz2E

On the other hand, Tuesday night’s remarkable FA Cup win over Shrewsbury by the U23s perhaps wouldn’t have happened had VAR not picked up an offside in the build-up, which certainly wouldn’t have been noted in-play as a Shrews player moved back from an offside position outside the penalty box.

Still, there’s clear room for improvement, not least of all in the time taken to reach decisions, when emotion and energy can slide after a goal has been scored – the complete opposite of what we want in football.

Now the Times report that the Premier League are finally pushing to fix the issue with a requisition for leeway.

Jurgen Klopp, the @LFC manager, says he likes a suggestion by @UEFA to make the VAR line 'thicker' as controversies continue around the offside rule in soccer pic.twitter.com/aBdIWWYkdw

The report suggests that league chiefs are looking for 10cm to be offered as a margin for error, effectively reverting to the old adage of giving the benefit of the doubt to attackers in tight situations—which never really seemed to be the case in practice.

Referee organisation PGMOL boss Mike Riley told club chairmen at a meeting that applying such a margin would have meant that, of the 25 goals ruled out by VAR so far this season, nine would have stood – a fairly hefty 36 per cent.

Clubs want tolerance built into the VAR system to avoid the lengthy delays while lines are redrawn on camera angles, as well as the farcical situations when we are informed as fans that our forward was offside by an earlobe, big toe or armpit.

However, any hopes of this being a quick resolution were quickly dashed by ESPN’s Dale Johnson, who tweeted that he had been told there was “absolutely no chance” of the 10cm rule being agreed to.

While applying yet another line on a screen to gauge whether the potentially-offside-player is within the allowed parameters might not be the best option, it’s at least a step forward to hear discussions are being had to fix the issue.

Jurgen Klopp, speaking in the above video in a press conference, noted the more simple option of making the lines thicker—or at least the defensive one, to immediately give more leeway.

For now we’ll just have to put up with the less than perfect approach of spoiling our celebrations—but even VAR surely now can’t put a halt to the biggest one of all once we wrap up the title.