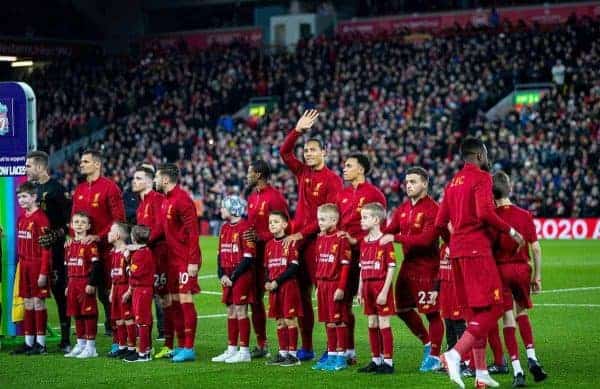 Ticket touts are capitalising on the prospect of Liverpool winning the title at home to Crystal Palace next month, with eye-watering re-sale fees revealed.

The Reds can clinch the title for the first time in the Premier League era with six more victories, after establishing a 22-point lead over Man City.

If City avoid dropping any more points, the first possible fixture to do so would be the visit of Palace on March 21, with meetings with Norwich, West Ham, Watford, Bournemouth and Everton to come before then.

To win the title at Anfield on a Saturday evening seems perfectly set for those attending, and given this will be the club’s first time winning the league since 1990 demand for tickets is phenomenal.

Unsurprisingly, many of those purchased will go to touts, and according to the Guardian‘s study into re-sale website StubHub, they are set to generate an incredible fee.

They claim “the value of tickets sold, combined with the list price of those advertised for sale, was approaching €1.5 million as of this week.”

Their specific findings have revealed €122,000 of tickets have already been sold, with a further €1.3 million currently advertised, which converts to £1.2 million in total.

The Guardian quote a Liverpool spokesperson as saying this “potentially compromises segregation arrangements as well as undermining our attempts to ensure tickets are distributed as fairly as possible via a loyalty system.”

That could suggest that some tickets are being sold by visiting Palace fans in the away end, profiting from their side being the opponents and tickets being more easily accessible for them.

Unauthorised re-sale was deemed illegal following the Taylor report in 1994, in the wake of the Hillsborough disaster, but StubHub’s overseas servers allow these transactions to be completed.

The government’s sports minister Nigel Adams has pledged to “see how we can clamp down further on the scourge of ticket touting.”

This development comes after it emerged that hotel prices in Liverpool for the planned title parade on May 18 had been hiked to ridiculous levels, with two beds in a six-bed dormitory room at the Hatters hostel costing £40,889.

Unfortunately, there is little fans can do regarding these issues, as it is a symptom of the sad state of consumerism in modern football; it seems it is either pay up or risk missing out.