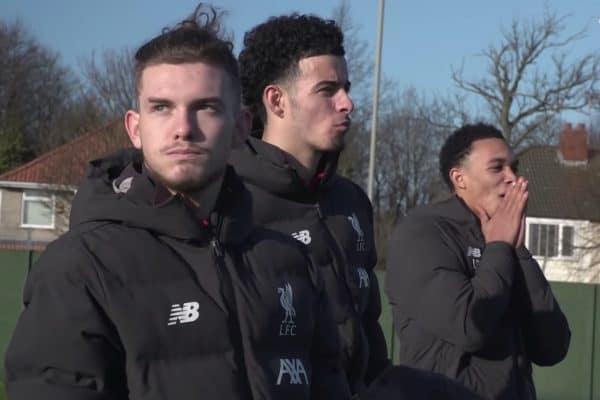 Adam Lallana showed the technique that endears him to managers as he beat the likes of Trent Alexander-Arnold, Curtis Jones and Harvey Elliott in a shooting challenge.

The 31-year-old is set to leave Liverpool at the end of the season, and there is no shortage of interest in the soon-to-be free agent.

Leicester are considered his most likely destination at this stage, though Tottenham, Arsenal and West Ham are also in the hunt, along with the likes of Lazio and AC Milan further afield.

He is routinely praised by managers, with Jurgen Klopp expressing his admiration last summer, saying “you see the sessions here, what a footballer he is, it’s incredible.”

In February, Mauricio Pochettino revealed his reaction on first watching Lallana as Southampton manager as “‘phwoar! What a player’,” while Gareth Southgate described him as England’s “best player” in his first year in charge.

Injuries and competition for places have restricted his ability to show this on a regular basis for Liverpool in recent years, but he is still integral on and off the pitch.

He is one of the leaders in Klopp’s squad, setting the standard in training and in the dressing room, with the Englishman regularly name-checked as a role model.

This training-ground quality was on show as he joined Trent, Jones, Elliott, Takumi Minamino and Divock Origi for a challenge at Melwood:

Working as advertising for Falken Tyres, the club’s ‘official tyre partner’, the group split into three teams, with Jones and Elliott, Trent and Origi, and Lallana and Minamino paired up.

Aiming to shoot through a series of tyres, first in the corners of the goal, then swinging from a rope in the middle, and then a fairground-style setup, the duos attempted to pick up the most points.

While Jones and Elliott came particularly close, and both Trent and Origi hit the rim on a number of occasions, Lallana’s technique stood out.

Hitting the post once, then the top-right corner and the bottom-left corner, Lallana picked up the win for him and Minamino, eventually beating the teenage pair by one point.

It is another video which shows the spirit within the Liverpool squad, and in particular the growing confidence Jones has among his team-mates—the 19-year-old said “hopefully” he would join Trent as ‘the Scouser in our team’ soon.

While Jones could benefit from his exit, losing Lallana this summer could leave Klopp with a gap to fill in his squad as much in terms of leadership as it would a useful squad option.