Liverpool have to finish this campaign before we worry too much about next year – but we do know that new kits are coming with the Nike deal starting in July.

So far there hasn’t been too much talk from the club around the big corporate deal, with current suppliers New Balance still under contract.

Indeed, any subscribers to LFC newsletters or regular visitors to the club’s online shop will have seen recent pushes to sell the last of the NB-branded training gear.

Up until now, we’ve largely been seeing a wide variety of ‘concept kits’—some excellent, some reprehensible!—but noted kit-leaker Footy Headlines believe they have an image of Liverpool’s confirmed away kit for 2020/21.

The jersey is a vivid teal green—or ‘hyper turquoise’, to give it the official colour listing.

There’s certainly a stark contrast between kit colour and the trim, with the club crest, Nike swoosh and Standard Chartered sponsor logo all in black, as well as the collar detail.

Other interesting facts to note are the rounded collar, rather than a button or fold-down which has been suggested in some previous ‘leaks’, and the abstract background pattern on the shirt.

The colour also appears similar to, or perhaps inspired by, the actual Liver birds on top of the famous city buildings. 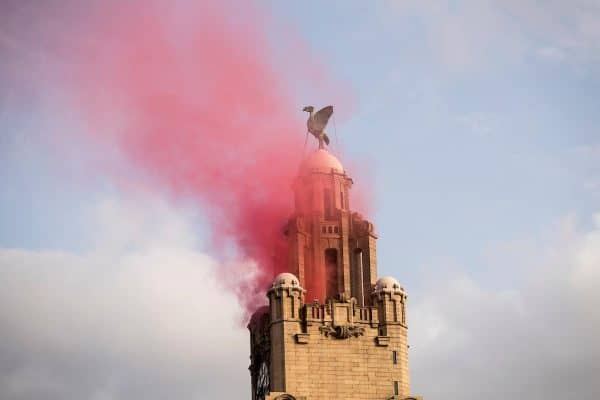 It should be noted, of course, that such leaks are often proven incorrect and this one may turn out to be no different.

The Reds’ contract with Nike was due to start on 1 June, in the off-season, but that date now may fall among rescheduled Premier League games due to the coronavirus-forced suspension of matches.

It’s doubtless a legal matter which will need to be resolved between the Reds, Nike and NB, but there is one potential fixture that could see Liverpool wearing a new change strip in 19/20, regardless of if it’s the one above or not.

Away games against blue-themed Everton, Man City and Brighton won’t necessitate a change of kit, and nor will playing at Newcastle on the (scheduled) final day.

But away to Arsenal, currently set for 2 May, will see a colour clash and the need to switch.

In all probability, it seems more likely that the Reds will see out the season in their current kits—but fans had plenty to say on the rumoured new jersey all the same, with some decidedly mixed reviews.

Not sure if this is awful or amazing

Would wear. My fave kit to wear in house is my all green

Interesting strategy from Nike, designing kits that no one will buy ????? pic.twitter.com/6zmn0x5nGc

Liverpool, and the rest of the league, are hoping to come to a decision on whether the Premier League can resume in the coming weeks, with all parties meeting on Thursday.