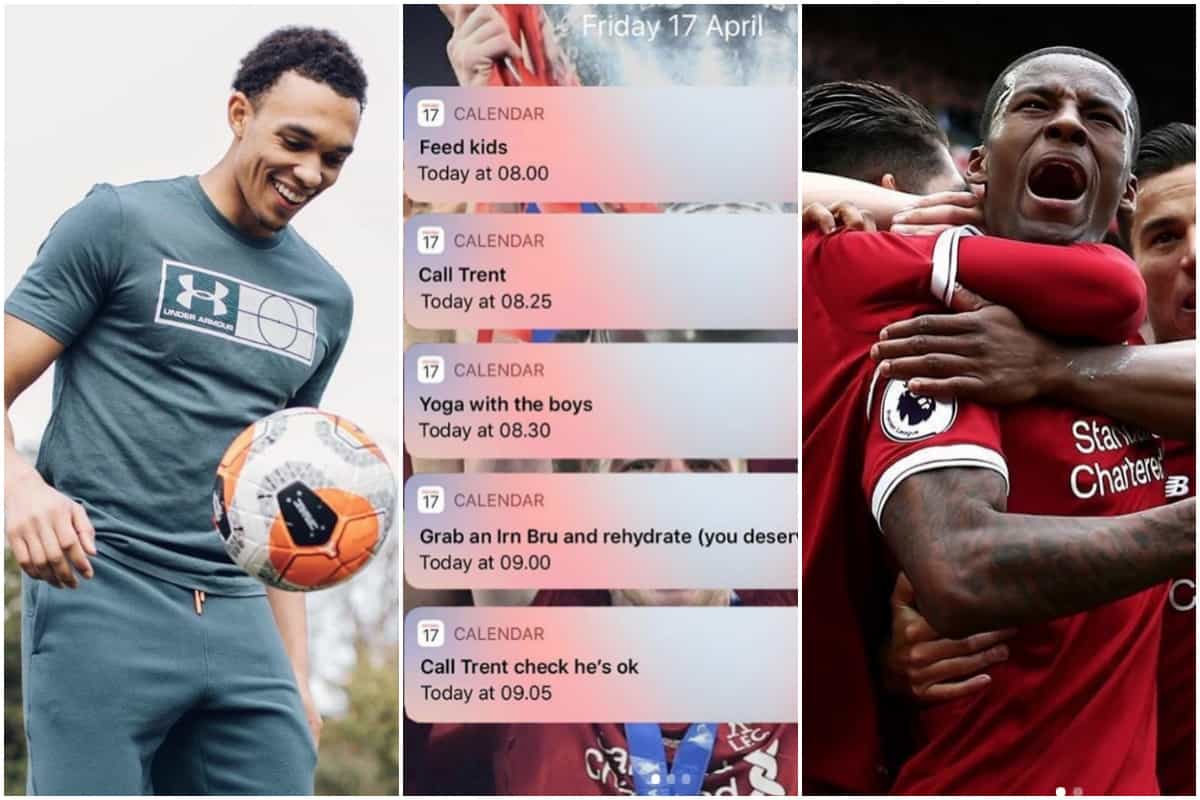 Andy Robertson has provided a hilarious breakdown of his “typical day in isolation” and James Milner was on hand to provide some advice during notable gaps in his schedule.

Vision of Liverpool’s talents on the field may be on temporary hold but their social media prowess continues to be shown off to its full extent.

And Andy Robertson may be giving James Milner a run for his money as the Reds’ star entertainer with his latest post.

The Scot was at the forefront of a recent post from Trent Alexander-Arnold which stated that his pet dog was his “number one” and not Robbo, but that does not appear to be reciprocated as per the No. 26’s “typical day in isolation”:

The schedule starts with ‘feed the kids’ at 8 am and then entails six Trent related activities, including a morning call, a checkup 40 minutes later, a re-watch of ‘corner taken quickly’ and, don’t worry, time is then allocated to ‘try and recreate it’.

In and amongst that there is also time freed up for ‘yoga with the boys’, a ‘text to Virgil to tell him I miss him’ – don’t we all – and a goodnight call for his fellow full-back.

And Milner, who Robertson allocated a 10.05 am slot to ‘scroll through Milly’s insta’, provided the suggestion that “in that gap between 1530 and 1900 get some hip stretches done.”

This is the type of humour we have come to expect and love and as days in isolation go, it doesn’t sound so bad – and neither is his phone background.

Elsewhere, Gini Wijnaldum reflected on “one of his favourite goals” for the club in the final day 3-0 win over Middlesbrough in 2016/17 which sealed a place in the Champions League and led to “two wild European campaigns”:

#Throwback to one of my favourite goals for @liverpoolfc ???? This game sealed our @championsleague spot for the next season and two wild European campaigns followed. What’s your favourite moment from this game? #ThrowbackThursday

For Trent, the work continued at home as he took to the garden for a spot of ball work:

James Milner paid tribute to Leeds United legend Norman Hunter who passed away on Friday after a battle with coronavirus:

And Naby Keita was present to continue to encouraging everyone to “stay home” as the UK’s lockdown was confirmed for another three weeks, at the very least:

Finally, Steven Gerrard posted a brilliant two-part video with his young son where they contested for the ball, and Stevie was adamant that you “can’t beat a good 50/50”:

As ever, it’s a welcome sight to see the spirits remain high within the squad as they continue to provide everyone with ample entertainment.