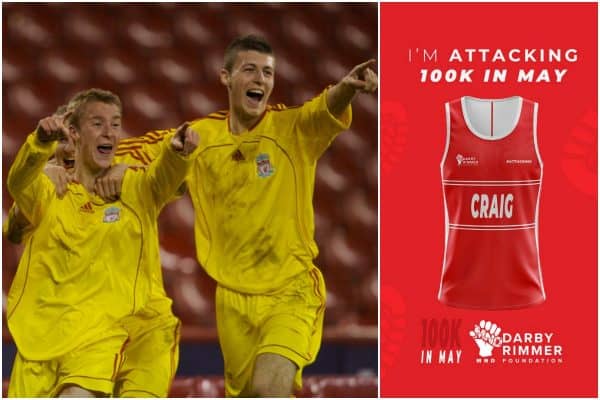 Two-time FA Youth Cup winner with Liverpool, Craig Lindfield has accepted the challenge of completing 100 kilometres in May for the Darby Rimmer MND Foundation.

One of his teammates during those triumphs was Stephen Darby, who made six senior appearances for the Reds between 2008 and 2010 and was diagnosed with motor neurone disease (MND) in 2018.

The 31-year-old was forced to retire and soon after formed a foundation with close friend Chris Rimmer, who was also diagnosed with the condition, to help raise funds and awareness for MND.

And starting next month, The Darby Rimmer MND Foundation has launched a ‘100k in May’ challenge which tasks people with completing the distance by walking, running, swimming or cycling within 31 days.

Lindfield aims to raise at least £5,000 for the foundation by running and walking the 100k, and Darby himself will be taking on the challenge as well as Rimmer who will partake on a wheelchair-adapted exercise bike.

The former Red took to Twitter to announce his involvement and to thank those who have shared and donated to his page, as it “is all about raising awareness and one day finding a cure:”

Thanks for sharing! This is all about raising awareness of MND and one day soon finding a cure ?? #AttackMND @DarbyRimmerMND pic.twitter.com/Q8ez7OZLrQ

Robbie Threlfall, who also rose through the ranks at Liverpool and was a member of the FA Youth Cup-winning teams alongside Darby and Lindfield, has similarly created a page and pledged his support to run 100k.

MND is a neurological condition which affects the nerves in the brain and spinal cord and there is no cure or effective treatment.

* To donate to Craig’s JustGiving page you can do so here.