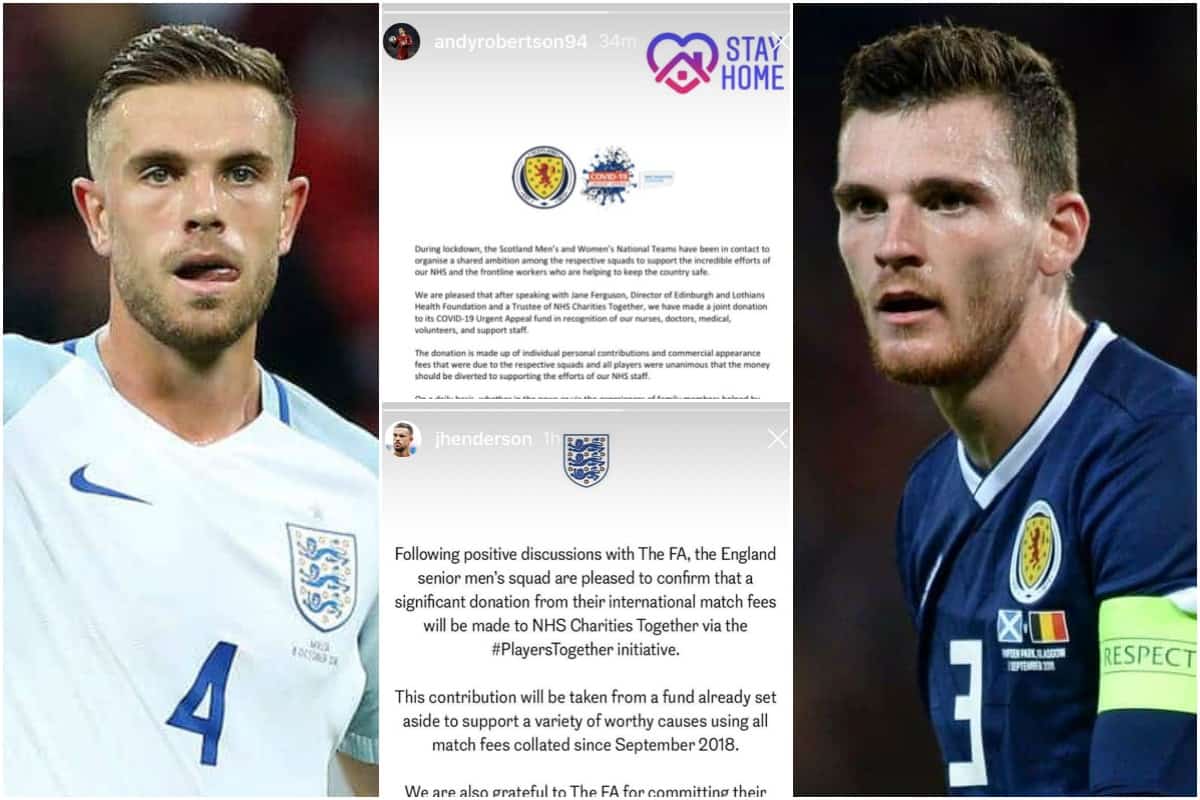 Both the England and Scotland men’s teams have made a “significant donation” to the NHS, using players’ match fees and personal contributions.

The initiative comes in line with the Players Together movement which saw Jordan Henderson lead Premier League players into donating funds to NHS Charities Together.

Both the women’s and men’s sides of England and Scotland have now made collective donations, with players displaying synchronised statements on their social media pages on Tuesday.

Trent Alexander-Arnold and Henderson were Liverpool’s two England representatives to share the statement, whilst Scotland captain Andy Robertson released a similar one of his own on behalf of his country’s efforts to support frontline workers.

The Three Lions have a pre-existing fund which aims to support a variety of causes and now all fees from the senior men’s internationals since the 2018 World Cup, which covers 16 games, will be directed towards the UK’s health service via the Players Together initiative.

For Scotland’s internationals, their donation is made up of personal contributions and commercial appearances fees after a unanimous decision was made to send all funds to the NHS.

“We have all been at home, taking the advice of medical advisers and watching the news that highlights the heroic efforts of our NHS,” Robertson said.

“We have all been inspired by the selflessness of nurses, doctors and all healthcare workers on the frontline — it only reinforces how vital the NHS is to our country and how we must cherish and protect this institution.

“Throughout the squad, we have players with friends and family members involved in the NHS, so when the idea was floated around the WhatsApp group chat, it was a no-brainer and unanimously the right thing to do.

“Rachel [Corsie] and the women’s national team were having similar conversations and I am proud that we can demonstrate our solidarity with the wonderful NHS staff in Scotland and across the UK. On behalf of the men’s national team, I say ‘thank you’ to you all.”