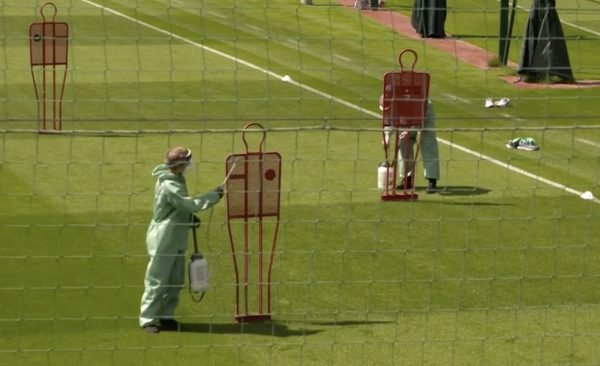 Liverpool were visited by safety inspectors this week to ensure they are following the return-to-training protocols as they headed back to small group work at Melwood.

The Reds are back in training but in very different circumstances to usual, with an airport-style one-way system, temporary facilities outdoors and strict regulations on contact.

Players are required to bring their own kit to training, while they are delivered meals to their homes rather than eating together in the canteen, with every precaution taken in the coronavirus pandemic.

On the training pitch, groups of no more than five are working together on limited exercises, while equipment is routinely disinfected to reduce the risk of contraction.

So far, it appears as though Liverpool’s return to training has been successful, with no indication that any player or staff member has tested positive—though three of the eight positive tests across the Premier League remain undisclosed.

To ensure the Reds are following the safety measures laid out by the UK government and agreed by the 20 clubs, inspectors visited Melwood on Monday.

That is according to the Mail, who report that three inspectors were on the premises for “several hours” as they conducted “very thorough” checks, as one of the first four visits league-wide.

Facilities, food provisions and medical departments are among the areas most closely scrutinised, with questions encouraged and advice given prior to another, unannounced visit in the near future.

There is no suggestion that Liverpool ‘failed’ the inspection and from the images shared by LFCTV over the past week it seems the rules are being followed.

It is explained, however, that clubs remain concerned as to the “ambiguity over potential punishments,” with no established sanctions for possible breaches of protocol at this stage.

Speaking last week, Jordan Henderson insisted that he and his team-mates have felt “very safe” in their return to Melwood.

“I feel very comfortable with all the measures that the Premier League and the club have put in place, along with my team-mates,” he explained.

“The testing, the temperature control, the social distancing and disinfecting everything has been at a really high level since we’ve been back.

“They’re doing everything they can to make it as safe as possible.

“We do feel comfortable and that’s why we’re here training. I feel very safe at the training ground, otherwise I wouldn’t be here.”

Liverpool are likely to return to contact training later this week, with the 20 clubs due to vote on ‘phase two’ on Wednesday.