Timo Werner’s team-mate, Dani Olmo, has insisted “the place that he fits best is Leipzig,” but in detailing his qualities proved why he would perfectly suit Liverpool.

The Reds remain “very, very keen” on Werner, according to The Athletic’s James Pearce, despite claims the shifting financial landscape of the Premier League could prompt a quiet summer.

It is likely Liverpool will not be able to spend as heavily as in previous transfer windows, but their stability under FSG should allow a reasonable outlay, particularly given little was committed in 2019.

This ensures Werner’s £50.5 million release clause could still tempt the club, with the German widely reported as a key target for Jurgen Klopp.

Red Bull figurehead Ralf Rangnick recently admitted the 24-year-old would “fit a club like Liverpool,” though he added that he “would prefer him to stay here,” which Olmo has echoed.

The Spaniard joined Leipzig in January, and speaking to Goal outlined why he is hoping to play alongside Werner for the long term.

“He gives you a lot of options because he loves to move all over the pitch,” Olmo said.

“He’s not a target man or a static striker, he likes to drift to the wings or drop into midfield to receive the ball and break the defensive line.

“He’s so fast and he has the killer instinct—he’s scored a lot this season. He’s a player that gives you a lot of opportunities in the way that he plays.

“I think the place that he fits best is Leipzig and the Bundesliga. He’s doing pretty well where he is.” 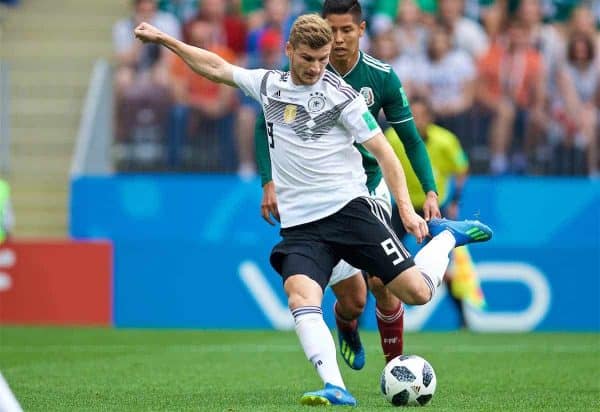 Olmo’s final line is a given: any player would prefer to operate alongside a forward of Werner’s calibre, and him leaving Leipzig would undoubtedly weaken them.

But his praise of the No. 11 highlights why he would fit in at Liverpool, and particularly as an option that could interchange with any of Klopp’s first-choice attackers.

There are elements of Olmo’s description that compare Werner to Roberto Firmino, with the Germany international adapting his game to drop deeper and influence play this season, while his ability to drift out wide is more akin to Mohamed Salah.

Pace is almost essential in the Reds’ system, and certainly on the wings, with Werner one of the fastest in the Bundesliga both with the ball at his feet and driving forward in support.

In theory, he could join Liverpool and cover for any of Firmino, Salah or Sadio Mane, while joining the likes of Takumi Minamino, Divock Origi and Harvey Elliott in pushing them for a starting spot.

Olmo may be eager to extend his partnership with Werner, but his comments only further reinforce why Klopp should be convinced he is the ideal signing.