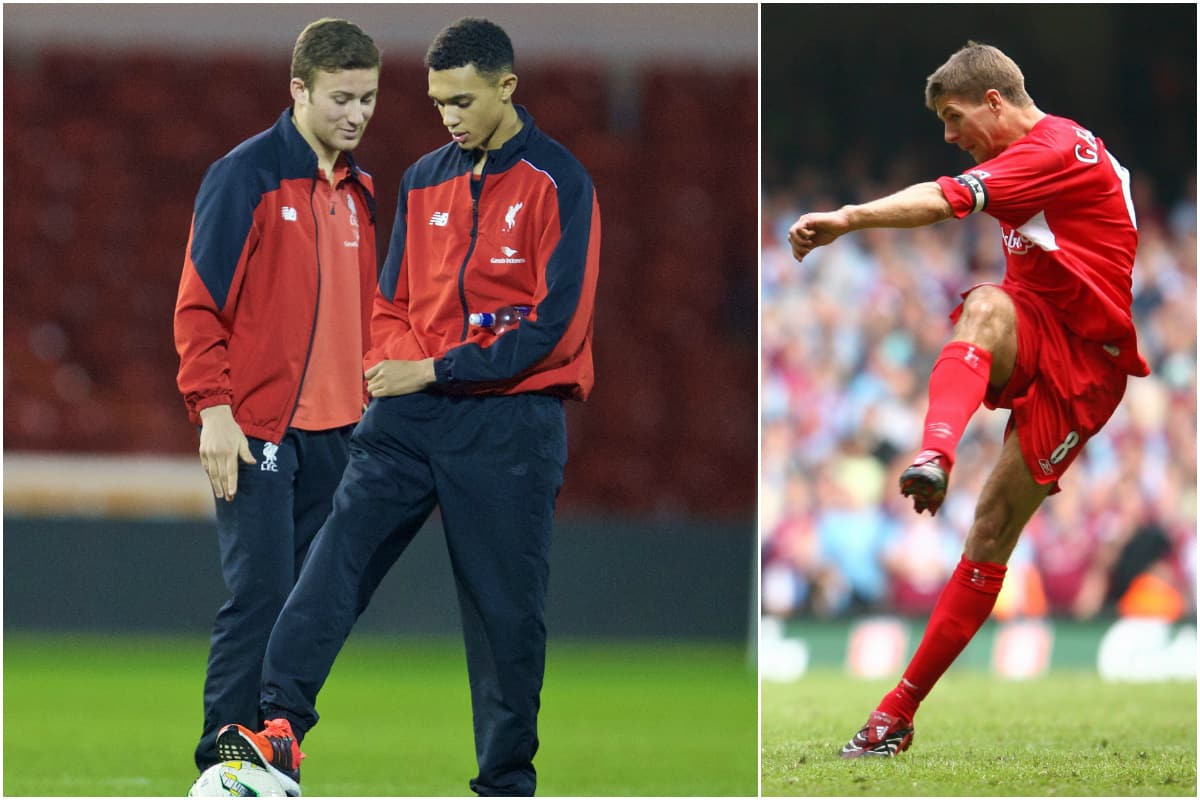 Trent Alexander-Arnold has revealed his top three goals of all time, and in discussing his other favourites recalled “hours and hours” recreating one from Steven Gerrard.

Liverpool’s right-back has become an increasingly frequent presence on social media during lockdown, and it has allowed him to get even closer to the fans.

And on Friday, Trent provided a list of his top three goals, including one for Liverpool and two for rival clubs; all from before he debuted for the Reds in 2016.

Gerrard, and his powerful strike against Olympiakos on the road to Istanbul, took the top spot, while efforts from Zinedine Zidane and Thierry Henry made up the rest of the standout trio:

My top goals of all time:

Gerrard v Olympiacos (what a hit son, what a hit)
Henry v United (the flick up and hit on the turn)
Zidane volley v Leverkusen (you know the one)

Got to factor in opposition and importance of the game.

When asking for other suggestions, Trent was faced with a number of familiar strikes—including the free-kick against Hoffenheim which marked his first goal for the club.

“Definitely not one of the best goals of all time but a very special one for me for obvious reasons,” he conceded.

He described Lionel Messi’s free-kick against Liverpool in last season’s Champions League as “unstoppable,” and relished the Divock Origi goal that sealed victory over Tottenham in the final.

“Will never ever forget that goal,” he wrote. “Can still see it hitting the back of the net. What a feeling.”

The 21-year-old shared memories from the Main Stand at Anfield, watching Fernando Torres score his stunner against Blackburn, along with his attempts to recreate another from Gerrard:

That was unreal. I remember trying to recreate that in the park for hours and hours. https://t.co/hj3W8YdF0Y

It is no surprise to hear Gerrard was a big inspiration for Trent as a youngster, given his influence at Liverpool, but the image of him emulating his 35-yard stunner in the parks of West Derby is a brilliant one.

Elsewhere, Dejan Lovren shared a video of him and Mohamed Salah engaging in some socially distanced bickering at Melwood:

After 2 months not seeing each other, you see and feel there is a positive vibe between us. @MoSalah pic.twitter.com/JshxtT8A0d

Andy Lonergan savoured the rarity of three consecutive saves to deny Salah, Roberto Firmino and Sadio Mane, admitting it is “not often you keep these three out”:

Salah posted a picture of him in the pool, and Alex Oxlade-Chamberlain responded with “the selfie king strikes again”:

For Virgil van Dijk, there was an opportunity to relax on his PlayStation:

Gini Wijnaldum stressed that he is “ready to get back to business” after Liverpool returned to full-contact training at Melwood earlier this week:

Ready to get back to to business ??? #focused #PremierLeague

Rhian Brewster is “itching” to get back on the pitch with Swansea too, with Liverpool expected to allow the striker to stay in south Wales until a delayed end to the season:

Liverpool are now three weeks away from their first game back, with the Merseyside derby likely to be held on Saturday, June 20, and they should be raring to go with the Premier League title in sight.